Economy of London facts for kids 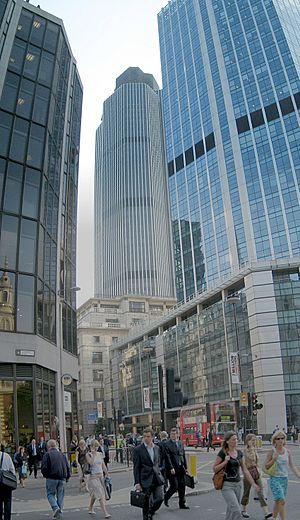 Bishopsgate, in the City of London.

The economy of London is dominated by service industries, particularly financial services and associated professional services, which have strong links with the economy in other parts of the United Kingdom (UK) and internationally. In addition to being the capital city of the United Kingdom, London is one of the world's leading financial centres for international business and commerce and is one of the "command centres" for the global economy.

London is the most populous region, urban zone and metropolitan area in the United Kingdom. London had the fifth largest metropolitan economy in the world in 2011 according to the Brookings Institution. Some of its neighbourhoods have estimated per capita GVA as high as £116,800 ($162,200). The London fiscal surplus, £32.5 billion in 2016–17, mostly goes towards funding services in other parts of the UK.

London generates approximately 22 per cent of the UK's GDP. 841,000 private sector businesses were based in London at the start of 2013, more than in any other region or country in the UK. 18 per cent are in the professional, scientific and technical activities sector while 15 per cent are in the construction sector. Many of these are small and medium-sized enterprises.

For the 19th and much of the 20th centuries London was a major manufacturing centre (see Manufacturing in London), with over 1.5 million industrial workers in 1960. Manufacturing suffered dramatic decline from the 1960s on. Entire industries have been lost including shipbuilding (which ended in 1912 after hundreds of years with the closure of the Thames Ironworks and Shipbuilding Company), consumer electronics, aircraft manufacture and most of the vehicle construction industry. This trend continues, with the loss of the pharmaceutical manufacturing sites of Aesica (formerly Merck Sharp and Dohme) at Ponders End in 2011, and Sanofi-Aventis (originally May & Baker) at Dagenham by 2013. Pharmaceutical and biotechnology companies in the United Kingdom still have a presence in London, including the world headquarters of GlaxoSmithKline.

A substantial industrial plant remaining in operation is Ford Dagenham, the largest diesel engine manufacturing site in the world. Food and drink manufacture remain in places, for example baking at Warburtons in Brimsdown, biscuits at United Biscuits in Harlesden, brewing at Fuller's Brewery in Chiswick, manufacture of coffee and chocolate by Nestlé in Hayes, and refining of sugar and syrup by Tate & Lyle in Silvertown. At 2.8%, London was the region containing the lowest proportion of employees engaged in UK manufacturing.

London was named the city with the best real estate investment opportunities for foreign investors in 2014. Office development was at a four-year high in 2013 with 9.7 million sq ft across 71 schemes under construction.

A multibillion-pound 10-year construction programme has begun in Nine Elms on the South Bank of the river Thames in central London. This will develop the area from a semi-derelict, light industrial zone into a modern residential and business district. The programme includes regeneration of Battersea Power Station, construction of new embassies for the United States and the Netherlands, and regeneration of New Covent Garden Market which is the largest fresh produce market in the U.K.. Transport improvement plans include two new Northern line tube stations, riverbus piers, new bus services and a network of cycle lanes and footpaths. A new bridge across the river Thames will link Nine Elms to Pimlico on the opposite bank. Around 25,000 permanent jobs will be created once the new buildings are occupied and around 16,000 new homes.

Other large construction projects include Kings Cross Central and Paddington Waterside. In 2014, the government identified 20 new housing zones across London, and in February 2015 the development of the first nine zones was approved, which will create 28,000 new homes by 2025 from £260m of investment.

Transportation contributes to both the service and construction sectors of the London economy.

London has an integrated public transport system operated by Transport for London under a single electronic ticketing system, the Oyster card. The city's network successfully provided transport for the 2012 Summer Olympics. It includes the London Underground, London Overground, Docklands Light Railway, London Buses and London River Services. A ring of 18 railway stations provides train links to cities, towns and villages around the country as well international services to Paris, Brussels and Amsterdam via the high-speed Eurostar. The Thameslink rail network is undergoing a £6bn programme to upgrade and expand the line.

Crossrail, originally planned to open in 2018 but delayed until 2022, will be a new railway line running east to west through London and into the surrounding countryside. It will run on 118 km (73 mi) of track with a branch to Heathrow Airport. The main feature of the project is construction of 42 km (26 mi) of new tunnels connecting stations in central London including a branch to Canary Wharf in east London. It is Europe's biggest construction project with a £15 billion projected cost. An additional line, Crossrail 2, has been proposed.

Most of the streets of central London were laid out before cars were invented and London's road network is often congested. There is a £16/day congestion charge in Central London. The Ultra Low Emission Zone (ULEZ) adds an extra charge of £12.50/day for vehicles which do not meet Euro 4 standards for petrol and Euro 6 for diesel (which corresponds to vehicles made before 2007 and 2015 respectively. The ULEZ charge will be extended to the North and South Circular from October 2021.

London is served by six international airports which are the world's busiest city airport system by passenger traffic. These are Heathrow, Gatwick, Stansted, Luton, London City, and Southend.

There are a number of proposals for expanding airport capacity for London including expansion of London Heathrow Airport and expansion of Gatwick Airport. The principal argument in favour of airport expansion is to support economic growth in the UK by providing an international hub for air-transport links to fast-growing developing countries around the world. The Heathrow proposal expects to create 120,000 new jobs across the UK and bring economic benefits of more than £100 billion. It also anticipates boosting exports as a result of the expansion.

Once the largest port in the world, the Port of London is today the second-largest in the United Kingdom, handling 48 million tonnes of cargo each year. The port is not located in one area – it stretches along the tidal Thames, including central London, with many individual wharfs, docks, terminals and facilities built incrementally over the centuries. As with many similar historic European ports the bulk of activities has steadily moved downstream towards the open sea, as ships have grown larger and other city uses take up land closer to the city's centre. Today, much of the Port of London cargo passes through the Port of Tilbury, outside the boundary of Greater London.

London Gateway, the UK's newest container port, opened in 2013. The £1.5bn facility at Thurrock, Essex, is 20 miles (32 km) down the River Thames from London. It is expected to be able to handle 3.5 million containers a year. The development is forecast to create 27,000 jobs in London and the South East and contribute £2.4bn a year to its economy.

Artist's impression of the London skyline in 2012

All content from Kiddle encyclopedia articles (including the article images and facts) can be freely used under Attribution-ShareAlike license, unless stated otherwise. Cite this article:
Economy of London Facts for Kids. Kiddle Encyclopedia.