Red Deer is a city in central Alberta, Canada. It is located near the midpoint of the Calgary–Edmonton Corridor and is surrounded by Red Deer County. With a recorded population of 100,418 in the Canada 2016 census, Red Deer became the third Alberta city to surpass 100,000 people. The city is located in aspen parkland, a region of rolling hills that is home to oil, grain, and cattle production. It is a centre for oil and agriculture distribution, and the surrounding region is a major centre for petrochemical production.

Prior to European settlement, the area was a gathering place that was inhabited by Aboriginal tribes including the Blackfoot, Plains Cree and Stoney. European fur traders began passing through the area in the late eighteenth century. Into this ethnic mix, the Métis peoples also emerged.

A native trail ran from Montana in the south across the Bow River near Calgary and on to Fort Edmonton. About halfway between Calgary and Edmonton, the trail crossed the Red Deer River at a wide, stony shallow used by First Nations peoples and bison, commonly known as buffalo, since ancient times. The shallows, now known as the Old Red Deer Crossing, are about 7 kilometres (4.3 mi) upstream from the present City of Red Deer.

With the establishment of Fort Calgary by the North-West Mounted Police in 1875, traffic increased along what was by then known as the Calgary and Edmonton Trail. After the arrival of the Canadian Pacific Railway in Calgary, traffic along the "C & E" trail increased substantially. A trading post and stopping house were built at the Crossing in 1882 and a permanent settlement began to develop around it.

During the 1885 Riel Rebellion (also known as the North-West Rebellion), the Canadian militia constructed Fort Normandeau at the Crossing. The fort was later taken over by the North-West Mounted Police who used it until 1893.

With the decimation of the bison by hunters, the Aboriginal tribes who relied on them for food, clothing and shelter were also in decline. The fertile lands around the Red Deer River were attractive to farmers and ranchers. One early settler, the Reverend Leonard Gaetz, gave a half-share of 1,240 acres (5.0 km2) he had acquired to the Calgary and Edmonton Railway to develop a bridge over the river and a townsite. As a result, the Crossing was gradually abandoned. The first train from Calgary to Edmonton passed through Red Deer in 1891.

The Cree peoples called the river on which Red Deer stands Waskasoo Seepee, which translates to "Elk River". However, British traders translated the name as "Red Deer River", since they mistakenly thought elk were European red deer. Later, the settlers of the area named their community after the river. The name for the modern city in Plains Cree is a calque back from English of the mistranslated, mihkwâpisimosos literally "red type of deer" while the name of the river itself is still wâwâskêsiw-sîpiy or "elk river".

Leonard Gaetz acted as the local land agent for the Saskatchewan Colonization Company and purchased parts of three other sections from his employers. By 1890, the Gaetz family owned vast land holdings along the south bank of the Red Deer River around the mouth of the Waskasoo Creek. The holdings included parts of Sections 16, 17, 20 and 21. Leonard Gaetz's increasing wealth allowed his family to play a central role in the growth of Red Deer.

In 1895, Gaetz returned to the active ministry in Manitoba. Once again, this proved detrimental to his health. He retired back to Red Deer in 1901, and resided here for the remainder of his life. He was a strong promoter of the area, founding the Westerner showgrounds and annual "Westerner Days", akin to the Calgary Stampede. He died in Red Deer in 1907.

Red Deer saw a massive influx of settlers in the early 1900s. 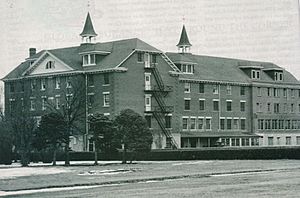 In 1901, when Red Deer was incorporated as a town, the population stood at 343. Through its location midway between Edmonton and Calgary and the fertile land that supported profitable mixed farming, Red Deer developed primarily as an agricultural service and distribution centre. A further boost came in 1907 when it was chosen as a major divisional point for the Canadian Pacific Railway. Two other railways, the Alberta Central Railway and the Canadian Northern Railway, entered the community in 1911. Red Deer underwent a large land boom.

World War I brought a sharp end to the boom. Red Deer emerged as a small, quiet, but prosperous, prairie city. In 1922, the provincial institution for the care of the mentally handicapped, currently known as the Michener Centre, was established in the city. Prospects looked good for modest but sustainable growth.

The Great Depression of the 1930s was a major setback for the city, though it fared better than some communities. Central Alberta was not hit by severe drought. The city was virtually debt-free and profited from its ownership of the local public utilities.

Growth returned to the city with the outbreak of World War II. Red Deer was chosen as the location of a large military training camp, the A-20 Camp which was located where Cormack Armoury, the Memorial Centre and Lindsay Thurber High School are now located. The British Commonwealth Air Training Plan built two air bases to the south of the city at Penhold and Bowden.

On January 1, 1948, the City of Red Deer amalgamated with the Village of North Red Deer, located on the north bank of the Red Deer River.

In the late 1950s, Red Deer claimed to be the fastest-growing city in Canada.

By roughly 1991, the Canadian Pacific Railway had been removed from the inner city; the track currently runs parallel to the city outskirts. The most prominent landmark of the railway remaining is the CPR bridge spanning the Red Deer River, converted to a walking trail shortly after the track removal.

The city is now a centre for oil and natural gas extraction and related industries and also for agriculture and agricultural services. It is also a regional centre for administration with a courthouse and provincial building. It also has major stores in malls such as Bower Place, Southpointe Common, Parkland Mall and many other locations. A large commercial district/business park called Gasoline Alley has developed in recent years just south of the city limits.

Red Deer is located on the Red Deer River after which it was named.

Red Deer is divided into the following neighbourhoods.

Named Cultural Capital of Canada by Canadian Heritage in 2003, Red Deer is home to a wide variety of arts and cultural groups. It is the home of Central Alberta Theatre, Ignition Theatre, Central Music Festival, the Red Deer Symphony Orchestra, the Red Deer Museum and Art Gallery, the Red Deer Royals and other performing arts and fine arts organizations.

The Red Deer Riggers of the Senior AAA Sunburst League play baseball at Great Chief Park. The team has been successful in recent years, winning provincial championships in 2009, 2010, 2013, 2014, and 2017.

Founded in 1887, the Red Deer Public School District serves 10,000 students in thirty schools. Offering a wide range of programming, including French Immersion from K-12, the district not only meets the needs of children and youth from the City of Red Deer and welcomes international students from around the world. Lindsay Thurber Comprehensive High School and Hunting Hills High School provide a large number of program options for students of high school age.

Greater North Central Francophone Education Region No. 2's school École La Prairie is a French school located near downtown Red Deer that offers pre-kindergarten through grade 9 programs. It offers all courses in French to a population of 119 students whose first language is French.

The Calgary–South Edmonton train service stopped in Red Deer until 1985.

Red Deer receives its drinking water supply from the Red Deer River which is treated and distributed throughout the city. One distinct feature of the water distribution system is the Horton Water Spheroid which, at the time of its construction in 1957, was the world's largest spheroid shaped reservoir. Water from the Red Deer water treatment plant is distributed to neighbouring communities including Red Deer County, Lacombe, Blackfalds and Ponoka as managed by the North Red Deer Regional Water Services Commission.

Wastewater is collected and sent to the City of Red Deer wastewater treatment plant which treats the sewage with a combination of grit traps, a primary clarifier, biological nutrient removal bioreactors, secondary clarifiers, and UV disinfection. Solids generated from the treatment process are treated using dissolved air flotation, anaerobic digestion, and biosolids lagoons. Treated effluent is then discharged back into the Red Deer River downstream of the water treatment plant.

All content from Kiddle encyclopedia articles (including the article images and facts) can be freely used under Attribution-ShareAlike license, unless stated otherwise. Cite this article:
Red Deer, Alberta Facts for Kids. Kiddle Encyclopedia.