New South Wales (NSW) is Australia's most populous state, located in the east coast of the continent. It is in the southern hemisphere between latitudes 28 and 38 degrees south of the equator and longitudes 143 and 154 degrees east of the Universal Prime Meridian (formerly known as the Greenwich meridian). The state is in the warm temperate climatic zone.

Cape Byron, in the north-east of the state, is Australia's most easterly mainland point.

The state is bordered on the north by Queensland, on the west by South Australia, and on the south by Victoria. Its coast faces the Tasman Sea. New South Wales contains two Federal enclaves: the Australian Capital Territory (ACT), and the Jervis Bay Territory. 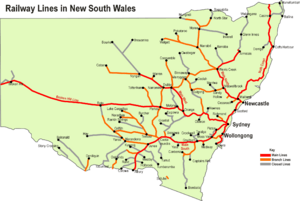 New South Wales can be divided physically into four sections:

The steep escarpment of the Blue Mountains to the west of Sydney prevented European exploration beyond the coastal strip for several years until explorer Gregory Blaxland found a way through in 1813, 25 years after the first settlement in Sydney. 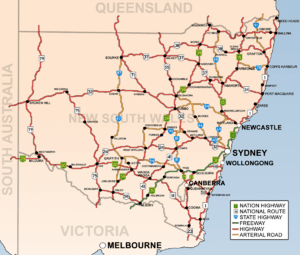 All content from Kiddle encyclopedia articles (including the article images and facts) can be freely used under Attribution-ShareAlike license, unless stated otherwise. Cite this article:
Geography of New South Wales Facts for Kids. Kiddle Encyclopedia.