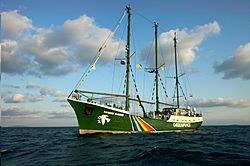 Greenpeace is an international non-governmental organisation working for the protection and conservation of the environment. It was set up in Vancouver, Canada in 1971 and now has regional and national offices in 46 countries.

On its official website, Greenpeace defines its mission as the following:

Greenpeace is an independent global campaigning organization that acts to change attitudes and behaviour, to protect and conserve the environment and to promote peace by:

All Greenpeace actions are based on a common set of values and should therefore be: nonviolent, non-partisan, independent and international.

Since Greenpeace was founded, seagoing ships have played a vital role in its campaigns. The group has three ocean-going ships, the Esperanza, Arctic Sunrise and Rainbow Warrior III.

Greenpeace receives its funding exclusively from individual supporters and foundations. Greenpeace screens all major donations in order to ensure it does not receive unwanted donations. The organization does not accept money from governments, political parties or corporations in order to avoid their influence. Donations from foundations which are funded by political parties or receive most of their funding from governments are also rejected.

All content from Kiddle encyclopedia articles (including the article images and facts) can be freely used under Attribution-ShareAlike license, unless stated otherwise. Cite this article:
Greenpeace Facts for Kids. Kiddle Encyclopedia.