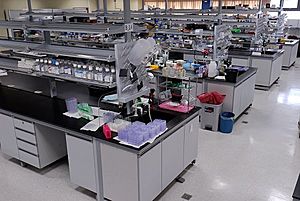 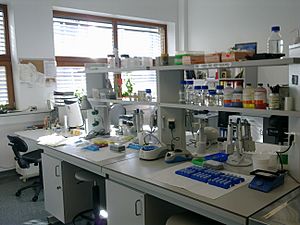 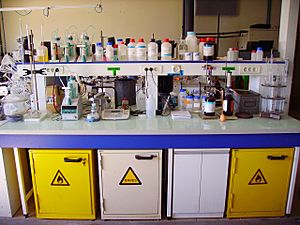 A workbench in a chemistry laboratory 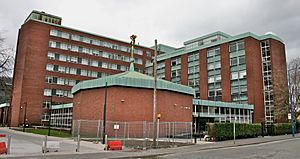 The Schuster Laboratory, University of Manchester (a physics laboratory)

A laboratory or lab is a facility that provides controlled conditions in which scientific or technological research, experiments, and measurement may be performed.

Laboratories used for scientific research take many forms because of the differing requirements of specialists in the various fields of science and engineering. A physics laboratory might contain a particle accelerator or vacuum chamber, while a metallurgy laboratory could have apparatus for casting or refining metals or for testing their strength. A chemist or biologist might use a wet laboratory, while a psychologist's laboratory might be a room with one-way mirrors and hidden cameras in which to observe behavior. In some laboratories, such as those commonly used by computer scientists, computers (sometimes supercomputers) are used for either simulations or the analysis of data. Scientists in other fields will use still other types of laboratories. Engineers use laboratories as well to design, build, and test technological devices.

Scientific laboratories can be found as research room and learning spaces in schools and universities, industry, government, or military facilities, and even aboard ships and spacecraft.

Despite the underlying notion of the lab as a confined space for experts, the term "laboratory" is also increasingly applied to workshop spaces such as Living Labs, Fab Labs, or Hackerspaces, in which people meet to work on societal problems or make prototypes, working collaboratively or sharing resources. This development is inspired by new, participatory approaches to science and innovation and relies on user-centred design methods and concepts like Open innovation or User innovation,. One distinctive feature of work in Open Labs is phenomena of translation, driven by the different backgrounds and levels of expertise of the people involved.

Early instances of "laboratories" recorded in English involved alchemy and the preparation of medicines.

The emergence of Big Science during World War II increased the size of laboratories and scientific equipment, introducing particle accelerators and similar devices.

The earliest laboratory according to the present evidence is a home laboratory of Pythagoras of Samos, the well-known Greek philosopher and scientist. This laboratory was created when Pythagoras conducted an experiment about tones of sound and vibration of string.

In the painting of Louis Pasteur by Albert Edelfelt in 1885, Louis Pasteur is the shown comparing a note in his left hand with a bottle filled with a solid in his right hand, and not wearing any personal protective equipment.

Researching in teams started in the 19th century, and many new kinds of equipment were developed in the 20th century.

A 16th century underground alchemical laboratory was accidentally discovered in the year 2002. Rudolf II, Holy Roman Emperor was believed to be the owner. The laboratory is called Speculum Alchemiae and is preserved as a museum in Prague.

Laboratory techniques are the set of procedures used on natural sciences such as chemistry, biology, physics in order to conduct an experiment, all of them follow the scientific method; while some of them involve the use of complex laboratory equipment from laboratory glassware to electrical devices, and others require more specific or expensive supplies. 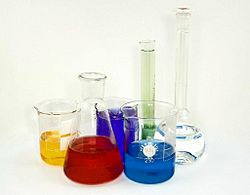 Three beakers, an Erlenmeyer flask, a graduated cylinder and a volumetric flask

Laboratory equipment refers to the various tools and equipment used by scientists working in a laboratory:

The classical equipment includes tools such as Bunsen burners and microscopes as well as specialty equipment such as operant conditioning chambers, spectrophotometers and calorimeters. 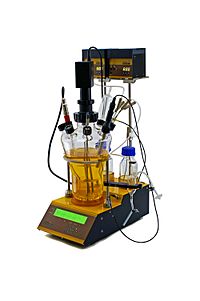 The title of laboratory is also used for certain other facilities where the processes or equipment used are similar to those in scientific laboratories. These notably include: 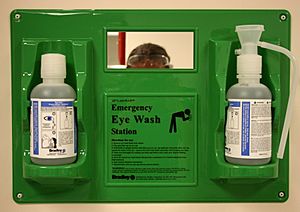 An eyewash station in a laboratory. 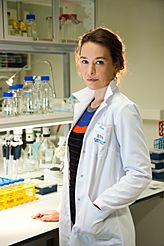 In many laboratories, hazards are present. Laboratory hazards might include poisons; infectious agents; flammable, explosive, or radioactive materials; moving machinery; extreme temperatures; lasers, strong magnetic fields or high voltage. Therefore, safety precautions are vitally important. Rules exist to minimize the individual's risk, and safety equipment is used to protect the lab users from injury or to assist in responding to an emergency.

The Occupational Safety and Health Administration (OSHA) in the United States, recognizing the unique characteristics of the laboratory workplace, has tailored a standard for occupational exposure to hazardous chemicals in laboratories. This standard is often referred to as the "Laboratory Standard". Under this standard, a laboratory is required to produce a Chemical Hygiene Plan (CHP) which addresses the specific hazards found in its location, and its approach to them.

In determining the proper Chemical Hygiene Plan for a particular business or laboratory, it is necessary to understand the requirements of the standard, evaluation of the current safety, health and environmental practices and assessment of the hazards. The CHP must be reviewed annually. Many schools and businesses employ safety, health, and environmental specialists, such as a Chemical Hygiene Officer (CHO) to develop, manage, and evaluate their CHP. Additionally, third party review is also used to provide an objective "outside view" which provides a fresh look at areas and problems that may be taken for granted or overlooked due to habit.

Inspections and audits like also be conducted on a regular basis to assess hazards due to chemical handling and storage, electrical equipment, biohazards, hazardous waste management, chemical waste, housekeeping and emergency preparedness, radiation safety, ventilation as well as respiratory testing and indoor air quality. An important element of such audits is the review of regulatory compliance and the training of individuals who have access to and/or work in the laboratory. Training is critical to the ongoing safe operation of the laboratory facility. Educators, staff and management must be engaged in working to reduce the likelihood of accidents, injuries and potential litigation. Efforts are made to ensure laboratory safety videos are both relevant and engaging.

All content from Kiddle encyclopedia articles (including the article images and facts) can be freely used under Attribution-ShareAlike license, unless stated otherwise. Cite this article:
Laboratory Facts for Kids. Kiddle Encyclopedia.