Leggetts Creek (also known as Legget Creek, Leggett's Gap Creek, Leggits Creek and originally as Liggett's Creek) is a tributary of the Lackawanna River in Lackawanna County, Pennsylvania, in the United States. It is approximately 9.0 miles (14.5 km) long and flows through Scott Township, South Abington Township, and Scranton. The watershed of the creek has an area of 18.5 square miles (48 km2). The creek has three named tributaries: Leach Creek, Clover Hill Creek, and Summit Lake Creek. Leggetts Creek is considered to be impaired due to urban development problems, but is not affected by acid mine drainage. The creek is fairly alkaline and is a perennial stream. Its headwaters are in wetlands outside of the Lackawanna Valley and it flows through a water gap known as Leggetts Gap or The Notch. Major lakes in the watershed include the Griffin Reservoir (which is used as a water supply), Summit Lake, and Maple Lake. The creek is a source of flooding in South Abington Township.

A historic Native American path used to pass through the water gap of Leggetts Creek on its way from the headwaters of the Lehigh River to the Great Bend on the Susquehanna River near the Pennsylvania/New York border. Some mining and quarrying operations have been done in the watershed and the Liggett's Gap Railroad was built and was opened, through what was called Liggett's Gap at the time, on April 15, 1851. In the late 19th, 20th, and early 21st centuries, numerous bridges were constructed across the creek. Wild trout naturally reproduce within the creek and several other species have been observed in its waters as well. Some reaches of the creek have a riparian buffer consisting of old growth forests. In other places, there are grasslands or invasive plants. A greenway/connecting trail along the creek was proposed in the Lackawanna River Watershed Conservation Plan. 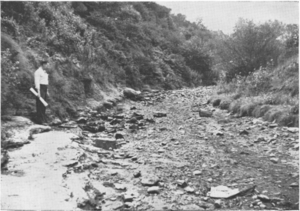 Leggetts Creek reaches its confluence with the Lackawanna River 14.36 miles (23.11 km) upriver of its mouth.

Leggetts Creek is considered by the Pennsylvania Department of Environmental Protection to be impaired due to urban development problems.

It is possible that Leggetts Creek sometimes exceeds its total maximum daily load, especially during low flow conditions and the summer months. There are some mine drainage issues on the creek between Rockwell Avenue and Charles Street. It experiences some flow loss to underground mine voids. In 1978, the Pennsylvania Department of Environmental Resources (now known as the Pennsylvania Department of Environmental Protection) estimated that the creek lost 20 to 30 percent of its flow to mines during dry weather. However, the creek is large enough that this does not cause aquatic habitat to be lost. The Chinchilla sewage treatment plant discharges into the creek in the vicinity of Leggetts Gap. In its lower reaches, the creek is impacted by past mining, urban development, and debris. Stormwater also flows into the Lackawanna River via the creek and it is affected by fine sediment. There is one stormwater detention facility in the watershed, at Leggett's Creek Estates.

South Abington Township once applied for a permit to discharge stormwater associated with construction activities into Leggetts Creek and for a permit for "Stormwater Discharges from Municipal Separate Storm Sewer Systems" into the creek.

Leggetts Creek attains its designated uses. However, its water quality and habitat quality are significantly impacted and it contributes significantly to the degradation of the Lackawanna River. The degradation is mainly due to urbanization, as opposed to abandoned mine drainage. The creek is a perennial stream. In a 2009 study, the creek was described as showing "some degraded conditions".

Leggetts Creek has relatively high levels of total dissolved solids and electrical conductivity. The electrical conductivity of the creek ranged from 538.00 to 979.50 micro-siemens per centimeter, with an average of 677.54 micro-siemens per centimeter. The concentration of dissolved solids ranged from 50.00 to 680.00 milligrams per liter, with an average of 411.96 milligrams per liter. The creek is fairly alkaline, with a pH ranging from 7.64 to 9.23 and averaging 8.20. The concentration of salinity in the creek averages 345 parts per million, but reaches levels as high as 435 parts per million and as low as 280 parts per million. This is within the recommended limit of 1000 parts per million, but a 2013/2014 study nevertheless recommended reducing the salinity of the creek. 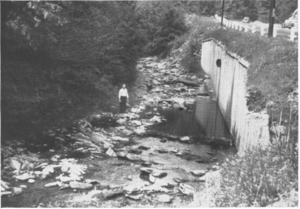 Leggetts Creek flows through a water gap known as Leggetts Gap or The Notch. The gap is cut through the West or Lackawanna Mountain Range by the creek. There have been some culm banks along the creek and historic mining operations such as those at the Marvine #6 Colliery have affected it. The creek's headwaters are in wetlands surrounded by residential development. There is riprap on the creek in Leggetts Gap as it flows near major highways in this stretch. It typically has a natural channel in part of its lower reaches and there are some reaches with gradual slopes. However, in some parts of the creek's lower reaches, fill has been dumped onto its banks, creating steep slopes. The creek has been channelized in South Abington Township.

There are waterfalls and cascades on a reach of Leggetts Creek from the Griffin Reservoir to an intake dam three quarters of a mile downstream. These waterfalls are formed by rock ledges, boulders, and the remains of an old mill. A streambank stabilization project has been carried out on the creek at South Abington Park. The creek flows through 51 pipes, whose sizes range from 3 to 36 inches (7.6 to 91.4 cm). The Keyser Avenue Borehole is in the vicinity of the creek.

The headwaters of Leggetts Creek are outside of the Lackawanna Valley. At Providence, the creek flowed directly southeast prior to the glacial period, reaching the Lackawanna River approximately 0.5 miles (0.80 km) downstream of its current location. However, the course now flows to the east instead. The old course of the creek has been built over. There is a ledge on the north bank of Leggetts Creek in its lower reaches. The creek makes a sharp eastward bend around Providence. From this point downstream to its mouth, it flows through a rocky channel that contains a thick covering of till on its upper walls.

A run of the river dam known as the High Service Dam is on Leggetts Creek in Scranton. The dam is 12 feet (3.7 m) wide.

A rock formation known as the Campbell's Ledge Black Shale occurs in the vicinity of Leggetts Creek. This rock formation contains shale and coal. The ledge on the northern bank of the creek was in the early 1900s noted to contain a large mass (up to a million tons) of sandy till.

As of the early 2000s, the Theta Company owns some tracts of land in the watershed of Leggetts Creek. These include areas around the Griffin Reservoir and Maple Lake. Some property along the creek's floodplain is owned by the city of Scranton. Additionally, there are parcels of abandoned mine lands in the vicinity of the creek in northern Scranton. These parcels may be developed by the 2020s. The major neighborhoods in the watershed include historic residential neighborhoods that were developed between 1870 and 1920.

Leggetts Creek is a source of flooding in South Abington Township, where it commonly floods low-lying properties. 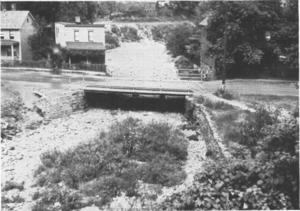 A historic Native American path used to pass through the water gap of Leggetts Creek on its way from the headwaters of the Lehigh River to the Great Bend in the Susquehanna River near the Pennsylvania/New York border. Thomas Meredith conceived the idea of a railroad going from the mouth of the creek at Providence to the Great Bend on the Susquehanna River, a distance of 48 miles (77 km), in 1826. Names such as the "Lackawannock and Susquehanna Railroad" and the "Meredith Railroad" were considered, but eventually the name "Leggetts Gap Railroad" was settled on. The railroad was first chartered in 1832, but no progress was made until 1849. The Rockwell Mine at Leggetts Gap was opened in 1854. The Leggetts Creek Colliery was operational in the early 1900s. Additionally, a ledge in the vicinity of the creek was quarried extensively by the early 1900s.

In the late 1960s, a dredging project was proposed on Leggetts Creek to repair the damage caused by acid mine drainage and coal mining. In 1991, the Lackawanna River Corridor Association gathered data on the water chemistry and biological habitats of Leggetts Creek. In 2012, the South Abington Sewer Authority began upgrading its sewage treatment plant to prevent wastewater and nutrient pollution from entering the creek. They also installed new sewer lines, including some that run parallel to or under the creek. PA Trout Unlimited's AMD Technical Assistance Program conducted a survey of the fish population in the creek on November 15, 2013. The Lackawanna Valley Conservancy once received a $190,000 Growing Greener grant for the Leggetts Creek Greenway.

Wild trout naturally reproduce in Leggetts Creek from Summit Lake Creek downstream to its mouth, a distance of 3.60 miles (5.79 km). It is stocked with trout and also is inhabited by some non-game species. The drainage basin of the creek upstream of Summit Lake Creek is a Coldwater Fishery and a Migratory Fishery. From Summit Lake Creek downstream to its mouth, the drainage basin is a Trout Stocked Fishery and a Migratory Fishery. In a 2013 fishery survey of the creek, nine brown trout were observed. Their lengths ranged from 84 to 316 millimeters, with an average of 139 millimeters. The vast majority were in the 75 to 99 millimeter bracket. Their population density was 164 per hectare.

In the fishery survey of Leggetts Creek, brown trout and cutlips minnow were the only common species. However, bluegill, eastern blacknose dace, longnose dace, and largemouth bass were all classified as "present" in the creek. Brown bullhead, flatnose minnow, and pumpkinseed were found to be rare.

The plant life around the Griffin Reservoir on Leggetts Creek includes various native trees and understory plants. From the reservoir downstream to an intake pond near Interstate 81, the creek's riparian buffer contains old growth forest, including tulip poplar trees. In addition to tulip popular, hemlock and pine also occur in the Griffin Mills reach of the creek. Near Leggetts Gap, the creek has some riparian buffering. Even in its lower reaches, it has a stable vegetative cover in some areas. However, other areas are full of invasive plants. Major invasive plant species include Japanese knotweed, Norway Maple, and Ailanthus. Overall, the riparian buffer of the creek mainly consists of grassland and forested land.

At three sites on Leggetts Creek, the EPT (Ephemeroptera, Plecoptera, and Trichoptera) Taxa Richness ranges from 4.00 to 6.00. The Total Taxa Richness ranges from 10.00 to 11.00. The Taxa Richness and the EPT Taxa Richness are the total number of macroinvertebrate taxa observed in a sample and the total number of those taxa that are in the three aforementioned orders, respectively. The Percent Intolerance Index ranges from 4.2% to 7.9% and the Beck's Index value ranges from 2.00 to 6.00. These two methods count individuals with PTVs of 0 to 3 and taxa with PTVs of 0 to 2, respectively. The Shannon Diversity Index value ranges from 0.70 to 2.01 and the Hilsenhoff Biotic Index value ranges from 1.24 to 2.85. The former is a method of determining community composition by considering both taxonomic richness and evenness of individuals. The latter is a count of individuals, weighted by pollution tolerance. The IBI Score of the creek ranges from 31.45 at site A2 to 43.39 at site D1. The habitat assessment result of the creek was an "optimal" 192 out of 200 on the reaches where it was analyzed.

A greenway and/or connecting trail along Leggetts Creek was proposed in the Lackawanna River Watershed Conservation Plan in the early 2000s. The greenway would be known as the Leggetts Creek greenway. It could link to the Lackawanna River Heritage Trail and could be extended to link to the Tunkhannock greenway. The South Abington Park and the Leggetts Creek Trail are in Chinchilla and the creek flows through the latter. Trestle Hole Park is also along the creek's lower reaches. The Dutch Gap Little League Field is located at Wells Street.

All content from Kiddle encyclopedia articles (including the article images and facts) can be freely used under Attribution-ShareAlike license, unless stated otherwise. Cite this article:
Leggetts Creek Facts for Kids. Kiddle Encyclopedia.