Liberty State Park (LSP) is a park in the U.S. state of New Jersey, located on Upper New York Bay in Jersey City, opposite both Liberty Island and Ellis Island. The park opened in 1976 to coincide with bicentennial celebrations and is operated and maintained by the New Jersey Division of Parks and Forestry. Liberty State Park covers 1,212 acres (490 ha). The main part of the park is bordered by water on three sides: on the north by the Morris Canal Big Basin and on the south and east by Upper New York Bay. The New Jersey Turnpike Newark Bay Extension (I-78) marks its western perimeter. 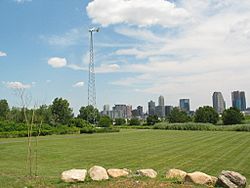 Most of the park's area is on landfill created by the Central Railroad of New Jersey (CRRNJ) and the Lehigh Valley Railroad, defunct companies whose lines once terminated there. In the northeast corner of the park is the CRRNJ Terminal, a historic transportation building. Statue Cruises offers ferries to Statue of Liberty National Monument, Ellis Island and Liberty Island that depart nearby. A 50 foot (15 m) section of track from the Lehigh Valley Railroad can be found in the park.

The southern Caven Point section of the park is separated from the main part of the park by the Liberty National Golf Club and is accessible along the water's edge using the Hudson River Waterfront Walkway. The long thin pier at the foot of Chapel Avenue that was once part of the park has been demolished. The Peninsula Park lies between the Big Basin of the Morris Canal and the Tidewater Basin in Paulus Hook. The Liberty Landing Marina is located on the Big Basin.

Communipaw Cove is part of the 36-acre (15 ha) state nature preserve in the park and is one of the few remaining tidal salt marshes along the Hudson River estuary. The Interpretive Center, designed by architect Michael Graves, is part of the preserve. To the west lies the Interior Natural Area, which is off limits to the public and is being allowed through natural processes to recover from environmental abuse. The park is also the only state park in Essex, Hudson, and Bergen counties. Another section of the park is called Liberty Industrial Park. 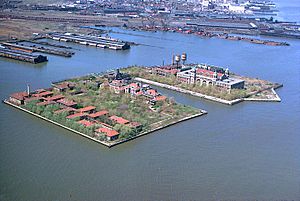 Much of the park is situated on landfilled tidal flats that formerly supported vast oyster banks as part of the territory of the Hackensack Indians, who called the area Communipaw and used it as a summer encampment. In the seventeenth century it became part of the colonial province of New Netherland, the patroonship Pavonia. The area was known as Jan the Lacher's Hook, so called for the man who was the bowery's second superintendent, Jan Everts Bout. For many years, the village, often referred to by Washington Irving, existed where the Liberty Science Center now stands. For hundreds of years it was a ferry port for local communities of Bergen, Bergen Township, and Hudson County, as well suburban and long-distance travelers to Manhattan.

In the latter half of 19th century, a small island named Black Tom was joined via landfill with the mainland. It became a major shipping, manufacturing, and transportation hub within Port of New York and New Jersey, leading to the construction of Communipaw Terminal. It was from this ferry/train station that many immigrants arriving at Ellis Island spread out across the USA. In 1916, on what is now the southeastern corner of the park, the Black Tom explosion killed as many as seven people, caused $20 million in property damage, and was felt throughout the Tri-State Region. 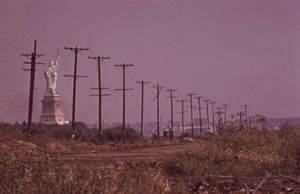 Before opening, LSP was the site of abandoned rail facilities built on landfills

Construction of the North River Tunnels, containerization, and the Interstate Highway System, made the area less viable. The decline of industry, deterioration of rail and maritime infrastructure, and toxic waste, eventually made the area obsolete. Abandoned buildings and brownfields dominated the landscape after the mid-twentieth century, though there was still some manufacturing and recreational use.

Audrey Zapp, Theodore Conrad, Morris Pesin and J. Owen Grundy were influential environmentalists and historians who spearheaded the movement that led to the creation of Liberty State Park. They are remembered by the naming of places and streets along the waterfront.

It is estimated the park suffered $20 million in damages during Superstorm Sandy in October 2012. In June 2016, the Central Railroad of New Jersey Terminal reopened after a $20 million renovation to repair the extensive damage caused by Sandy. As of December 2019, the Nature Interpretive Center remains closed due to storm damage. No timeline has been given for its completion.

On January 11, 2018, it was announced by New Jersey Department of Environmental Protection (NJDEP) that the interior 240 acres (97.1 ha) of the park that have been closed off to the public for decades due to environmental contamination would be remediated into an urban marshland and forest. The restoration is to be done in phases with the initial phase focusing on a 23 acres (9.3 ha) parcel of the interior. The marshland will be fed by a new channel connecting the Hudson River to the park's interior. There is currently no timeline yet for the remediation but the funding is to come from natural resource damage settlements. Work would begin in 2021. 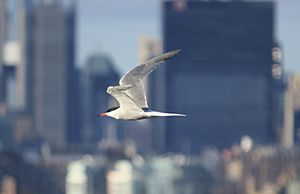 Liberty Walkway, a crescent-shaped promenade, stretches from the CRRNJ Terminal along the waterfront south to the Statue of Liberty overlook, bridging two coves along the way. It is part of the longer Hudson River Waterfront Walkway. Halfway along Liberty Walkway is a bridge to Ellis Island, but only authorized vehicles are allowed. The southeastern corner of the park contains the Statue of Liberty overlook, picnic facilities, a playground, the U.S. Flag Plaza and Liberation Monument, the Public Administration Building, and a memorial to the Black Tom explosions. Picnicking and barbecuing facilities are also located at the southern end of the park. Originally called "Liberty Walk", this part of the project won a landscape award in 1995. The name "Liberty Walk" was already associated with Philadelphia such as through a booklet The Liberty Walk Through Historic Old Philadelphia published by the American Wax Museum, Philadelphia (before 1969) which listed a walk round 23 sites of historic interest.

The Liberty Science Center, at the northwestern entrance to the park, is an interactive science museum and learning center. The center opened in 1993 as New Jersey's first major state science museum. It has science exhibits, the world's 5th largest IMAX Dome theater, the largest planetarium in the Western Hemisphere, numerous educational resources, and the original Hoberman sphere, a silver, computer-driven engineering artwork designed by Chuck Hoberman. 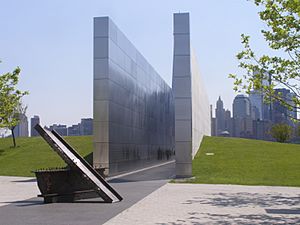 Liberation is a 1985 bronze sculpture designed by Nathan Rapoport as a memorial to the Holocaust, showing a U.S. soldier carrying out a survivor from a Nazi death camp.

The Sail of Columbus is a two-story sail-shaped bronze monument designed by Gino Gianetti that commemorates the 500th anniversary of the westward journey of Christopher Columbus to America in 1492. The "Sail" sits atop a stone base in the shape of a ship and features scenes of Columbus and his travels. It was dedicated from the Government of Italy and the City of Genoa in 1998.

Empty Sky is the official state memorial to the September 11 attacks of the World Trade Center. Situated on a berm the parallel walls engraved with the names of victims are oriented to face the former World Trade Center site. Designed by architect Frederic Schwartz, it was dedicated on September 10, 2011, commemorating the tenth anniversary of the attacks.

In July 2008, Friends of Liberty State Park filed a lawsuit to block the creation of the 9/11 memorial stating that New Jersey Department of Environmental Protection (DEP) did not provide enough public comment and did not authorize a proper permit linked to the project. The Friends of Liberty State Park is led by Sam Pesin, the son of Morris Pesin, who first lobbied for the creation of Liberty State Park. Sam Pesin stated that "The consensus [of park users] is that the memorial as proposed is a massive monstrosity that obstructs powerful views that need protection for future generations," he declared.

The administration of Governor Chris Christie proposed various commercial activities for the park. In 2017, it suggested leasing large parts of the waterfront for private marinas.

Caven Point is a 22 acres (8.9 ha) 22 bird sanctuary in Liberty State Park along the Hudson River Waterfront Walkway adjacent to the Liberty National Golf Course. The owners of the course would like lease the land to expand of it with additional holes. The proposal would require the "privatization" publicly- owned=land and disruption of the fragile ecosystem. Proposals to protect the land have been made in the New Jersey Legislature to specifically protect the park from commercial development without a severe vetting process and public scrutiny.

The Hudson-Bergen Light Rail runs just west of the park with a station at its entrance. Hornblower Cruises operates ferries to Ellis Island and Liberty Island, and a water taxi to Paulus Hook and the Battery Park City Ferry Terminal.

In July 2012, North Jersey Transportation Planning Authority allotted $175,000 to study transportation alternatives to and within the park.

In March 2013, Jersey City received a $500,000 grant to study extending Jersey Avenue from Downtown directly into the park, which would simplify access and create a new gateway to the park. In May 2013, a new pedestrian-bike bridge was placed over Mill Creek at the small basin to replace an older one that had been destroyed by Superstorm Sandy in October 2012. It is situated so as not interfere with any new road construction. In 2014 NJDOT announced that it would build a $10 million bridge over the Morris Canal.

Since 2007, the Veuve Clicquot Polo Classic is held every Spring at Liberty State Park.

In May 2010, plans were put forth outlining the use of the park as the new home of the United States Formula One Grand Prix for the 2012 season. These plans met outrage from the community, particularly the Friends of Liberty State Park, and were ultimately rejected by the New Jersey Department of Environmental Protection.

All content from Kiddle encyclopedia articles (including the article images and facts) can be freely used under Attribution-ShareAlike license, unless stated otherwise. Cite this article:
Liberty State Park Facts for Kids. Kiddle Encyclopedia.