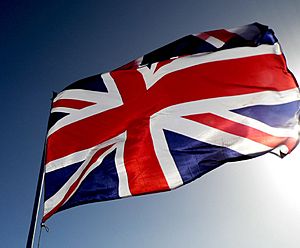 The Union Flag, the national flag of the United Kingdom

This list includes flags that either have been in use or are currently used by the United Kingdom, British Overseas Territories and the Crown dependencies.

The College of Arms is the authority on the flying of flags in England, Wales and Northern Ireland and maintains the only official register of flags for these countries. It was established in 1484 and as part of the Royal Household operates under the authority of the Crown. The Lord Lyon King of Arms holds a similar role within Scotland. A separate private body called the Flag Institute, financed by its own membership, also maintains a registry of United Kingdom flags that it styles 'the UK Flag Registry', though this has no official status under UK law.

National and subnational flags of the United Kingdom.

Countries of the United Kingdom

The flags of England and of Scotland are ancient war flags which became by usage the national flags of the Kingdom of England (which included Wales) and of the Kingdom of Scotland respectively and continued in use until the Act of Union 1707. Thereafter they were as de facto flags of those parts of the United Kingdom. The flag of Wales was devised in 1959. The Flag of Northern Ireland (if any) is argued over endlessly. The coat of arms of the Government of Northern Ireland, a red cross on a white field, defaced with a Red Hand of Ulster within a six pointed star topped with a crown, became used as a local flag, though the end of the province's Government in 1973 ended its official status. This flag has continued to be the internationally recognisable de facto flag of Northern Ireland through its use by international sporting organisations (for example FIFA, UEFA, and the Commonwealth Games) to represent Northern Ireland, though locally it has the allegiance mainly of the Unionist community. The St Patrick's Saltire is also sometimes used by the government to represent Northern Ireland when a discrete Northern Ireland flag is required.

Standards and Banners of the Prince of Wales

Other members of the Royal Family

The Channel Islands and the Isle of Man (Crown dependencies)

In 1999, the maritime flags of the British Overseas Territories were updated at the request of the Ministry of Defence. The white discs were removed from the field of the flags and each respective coat of arms was increased in size for ease of identification. As the MoD only had authority over sea flags, the Governments of the Overseas Territories were free to continue using the flags with white discs on land. The Overseas Territories' governments did switch to the updated flags over a staggered period of time, however some old-style flags with white discs may still be seen. Such flags have generally been adopted by Order in Council. Civil (Red Ensign) flags are under the control of the United Kingdom Secretary of State for Transport and are split into two categories: Category 1 is to register ships of unlimited tonnage and type. category 2 is to register commercial ships and yachts of up to 150 gross registered tons.

Prior to 1999, all Governors' flags had smaller discs and the outer green garland without the gold ring. Therefore, the dates given do not reflect this minor, consistent change.

It is explicitly permitted to fly the flag of the Black Country, East Anglia, Wessex, any Part of Lincolnshire, any Riding of Yorkshire or any historic county within the United Kingdom without needing any permission or consent.

Members of the Royal Family

All content from Kiddle encyclopedia articles (including the article images and facts) can be freely used under Attribution-ShareAlike license, unless stated otherwise. Cite this article:
List of British flags Facts for Kids. Kiddle Encyclopedia.