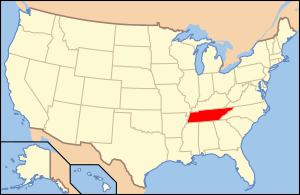 Tennessee, the Volunteer State, has many symbols.

Official symbols of the state are designated by act of the Tennessee General Assembly. The earliest state symbol was the first state seal, which was authorized by the original state constitution of 1796 and first used in 1802. The current seal design was adopted in 1987. The most recent designation of an official state symbol was in 2011, when "Tennessee", written by John R. Bean of Knoxville, was designated the ninth state song.

The General Assembly also has officially designated a state slogan, "Tennessee—America at Its Best," adopted in 1965, and a state motto, "Agriculture and Commerce," adopted in 1987 and based on the words on the state seal.

Tennessee's best-known unofficial symbol probably is its nickname, "The Volunteer State", which originated during the War of 1812 when many Tennesseans enlisted in the military in response to Governor Willie Blount's call for volunteers.

In 2003, a resolution of the 103rd General Assembly designated songwriting as an official state art form. In keeping with this designation, Tennessee has nine official state songs:

Additionally, a rap song by Joan Hill Hanks of Signal Mountain, entitled "A Tennessee Bicentennial Rap: 1796-1996", was designated the state's "Official Bicentennial Rap" song in 1996. It was written "to provide a fun and easy way for citizens and students to learn and retain some of [the] state's history."

A poem entitled "Oh Tennessee, My Tennessee" was designated the official state poem by the 88th General Assembly in 1973. The poem was written by U.S. Navy Admiral William P. Lawrence while in solitary confinement in a prisoner of war camp in North Vietnam.

In 1980 the General Assembly designated the square dance as the state's official state folk dance, which it described as "a uniquely attractive art form that remains a vibrant and entertaining part of Tennessee folklore."

All content from Kiddle encyclopedia articles (including the article images and facts) can be freely used under Attribution-ShareAlike license, unless stated otherwise. Cite this article:
List of Tennessee state symbols Facts for Kids. Kiddle Encyclopedia.