Kids Encyclopedia Facts
This page is about the botanical garden in California. For the Canadian locations nicknamed "Lotusland", see Vancouver and British Columbia.

Ganna Walska Lotusland, also known as Lotusland, is a non-profit botanical garden located in Montecito, near Santa Barbara, California, United States. The (15 ha / 37 acres) garden is the historic estate of Madame Ganna Walska. The County of Santa Barbara restricts visitation via a conditional use permit: Lotusland botanic garden is open to the public by advance reservation only, with walking tours 1½ to 2 hours long.

Ralph Kinton Stevens purchased the land in 1882; he and his wife, Caroline Lucy Tallant, named the property "Tanglewood". They established a lemon and palm nursery and eventually added other tropical plants to the collection and were among the early plantsmen of Santa Barbara.

In 1916 the estate was sold to the Gavit family, from Albany, New York, who renamed it "Cuesta Linda". They added landscape elements, garden structures, and the main residence designed in 1919 by Reginald Johnson in the Mediterranean Revival style. In 1921–1927 they commissioned additional landscape buildings and alterations to the residence in the Spanish Colonial Revival style from George Washington Smith. His work includes the water garden pool house and the distinctive pink walls of the estate.

The gardens were created over four decades by opera singer Madame Ganna Walska, who owned the property as a private residence from 1941 until her death in 1984. She was assisted in landscape planning and garden design by Peter Riedel, Ralph Stevens, Lockwood DeForest, and Joseph Knowles. The garden was opened to the public in 1993. 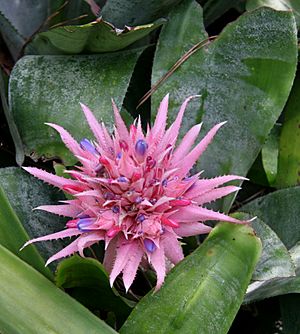 Featuring varieties of flowering plants that support butterflies and other insects. 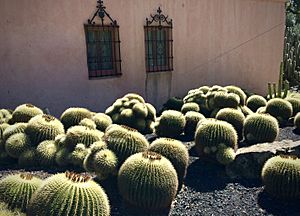 Cactus garden featuring a collection of columnar cacti begun in 1929 by Merritt Dunlap. Over 500 plants, representing about 300 different species of cacti in geographically organized groups. Notable specimens include species of Opuntia from the Galapagos Islands, Armatocereus from Peru and a complete collection of the genus Weberbauerocereus. Accent plants include Fouquieria columnaris (boojum tree), dry-growing bromeliads and several Agave species. The garden was designed by Eric Nagelmann and opened in 2004. A recent addition in 2014 completed Nagelmann's design. 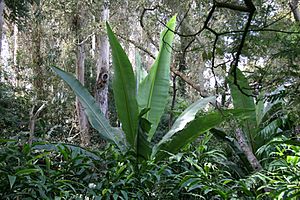 A collection of cacti and euphorbias, including a mass of golden barrel cacti (Echinocactus grusonii) and large, weeping Euphorbia ingens.

Lotusland has over 900 specimens of cycads, with nine of the eleven living genera and more than half of the known species represented. The collection includes three Encephalartos woodii, among the world’s rarest cycads and extinct in the wild.

Featuring many types of ferns, such as Australian Tree Ferns (Sphaeropteris cooperi) and giant staghorn ferns (Platycerium). Other shade-loving plants such as angel trumpet tree (Brugmansia), calla lily (Zantedeschia), clivia hybrids and a collection of Hawaiian Pritchardia palms are present. 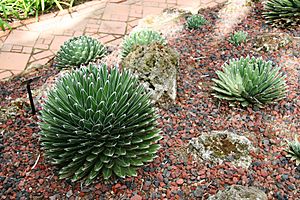 Featuring a horticultural clock 25 feet (8 m) in diameter, bordered by Senecio mandraliscae; a boxwood maze; and a "zoo" of 26 topiary animals, including a camel, gorilla, giraffe and seal. Other frames are shaped as chess pieces and geometric shapes. Lotusland received an anonymous $1 million gift to endow the topiary garden in 2014. 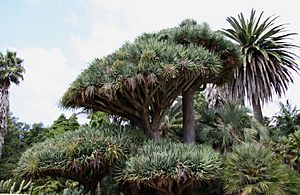 All content from Kiddle encyclopedia articles (including the article images and facts) can be freely used under Attribution-ShareAlike license, unless stated otherwise. Cite this article:
Lotusland Facts for Kids. Kiddle Encyclopedia.