Michael I of Romania facts for kids 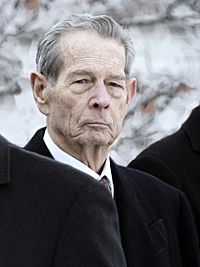 Michael, King of the Romanians, Prince of Hohenzollern (25 October 1921 – 5 December 2017), reigned as King of the Romanians for two periods. He was king from 20 July 1927 to 8 June 1930, and again from 6 September 1940, until forced to abdicate by the Communist Party of Romania. The communists were backed up by orders of Stalin to the Soviet armies of occupation on 30 December 1947.

He was great-great-grandson of Queen Victoria and a third cousin of Queen Elizabeth II. He was one of the last surviving heads of state from World War II, the other one is Simeon II of Bulgaria .

He died 5 December 2017 of complications from leukemia in Aubonne, Switzerland at 96 years old.

All content from Kiddle encyclopedia articles (including the article images and facts) can be freely used under Attribution-ShareAlike license, unless stated otherwise. Cite this article:
Michael I of Romania Facts for Kids. Kiddle Encyclopedia.