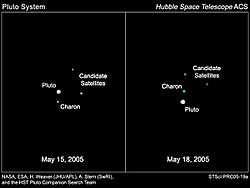 Discovery images of Nix and Hydra

Nix is a non-spherical moon of Pluto. It was found along with Hydra in June 2005 by the Hubble Space Telescope Pluto Companion Search Team.

The moon follows a circular orbit in the same plane as Charon. It takes 24.9 days to circle around Pluto.

Before its size was directly measured, the moon was calculated to have a diameter of between 46 km, if its reflectivity is similar to Charon's 35%, and 137 km, if it had a reflectivity of 4%, like the darkest Kuiper belt objects. Nix is slightly fainter than Hydra, suggesting that it is somewhat smaller in size. In the discovery image, Nix is 6,300 times fainter than Pluto.

Early research appeared to show that Nix was reddish like Pluto and unlike the other moons, but more recent reports have been that it is grey like the remaining moons.

Nix was visited along with Pluto by the New Horizons mission in 2015.

The formal name "Nix", from the Greek goddess of darkness and night, and mother of Charon, was announced on June 21, 2006 on IAU Circular 8723, where the designation Pluto II is also given. Together with Hydra, Pluto's third moon, the initials are those of the New Horizons probe. The initial proposal was to use the Classical spelling Nyx, but to avoid confusion with the asteroid 3908 Nyx, this was changed to "the Egyptian spelling of the Greek name".

All content from Kiddle encyclopedia articles (including the article images and facts) can be freely used under Attribution-ShareAlike license, unless stated otherwise. Cite this article:
Nix (moon) Facts for Kids. Kiddle Encyclopedia.