RisiKo! is a strategy board game, Italian stand alone variant of Risk. Purpose of the game is the achievement of a predefined, secret target that is different for each player: the target can consist either in the conquest of a certain number of territories, of two or more continents, or in the annihilation of one opponent.

The board in RisiKo! represents the world subdivided in 42 territories collected in 6 continents.

Each territory is represented by a Territories card. At the beginning of the game, these cards are distributed to players who take related territories. During the game a player can conquest a territory by attacking with his own armies. It is possible to attack a territory only from an adjacent territory. 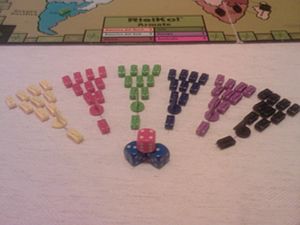 The armies in RisiKo! are in six colours: yellow, red, green, blue, purple and black.

Each player command armies groups identified by the colour and by which occupies the territories, attacks and defends. An army is represented by a tank: each player receives a certain number of tanks depending of the number of players, and can adding others when he starts his turn.

The initial number of tanks for each player is:

At the beginning of the game, each player gains a random Targets card, on which there are written the objectives that the player had to complete in order to win. The targets have to be kept secret for strategic reasons.

The possible objectives are (original version):

In tournament rules there are 16 different Targets cards which report graphically those territories to conquer.

Each of the 42 Territories cards represents a territory and a symbol among cavalry (horseman), infantry (soldier) and artillery (cannon). Moreover, in the deck there are two jokers (representing all three symbols). By the combination of three card it is possible gain a certain number of armies at the turn beginning:

Moreover, if the player calls for his bonus armies, he gain two more armies for each territory reported on the cards that he controls. The combination must be declared at the turn beginning, before to do any operation.

Rules are different from the rest of the world, that sees two main groups: European rules and American rules. The Italian RisiKo! rules are unique since the most considerable feature is that the defender can roll up to 3 dice, obtaining in this way an advantage in battles, whereas in American rules already in 1959 was specified that the maximum number of dice in battle was 5: 3 for the attacker, 2 for the defender.

All content from Kiddle encyclopedia articles (including the article images and facts) can be freely used under Attribution-ShareAlike license, unless stated otherwise. Cite this article:
RisiKo! Facts for Kids. Kiddle Encyclopedia.