Sheridan is a city in Yamhill County, Oregon, United States. Platted in the 1860s when it received a post office, the city was incorporated in 1880. A major fire burned much of the city in 1913, and a flood covered much of the city in 1964. The population of the city as of the 2010 Census was 6,127, an increase from 3,570 at the 2000 census. However, the 2000 Census count failed to include those incarcerated at the federal prison in the city, while the newer count did include those inmates.

Located in the western part of the Willamette Valley, the city is at the base of the Northern Oregon Coast Range along the South Yamhill River. Sheridan lies west of the county seat of McMinnville, along Oregon Route 18. This highway and Oregon Route 18 Business run east–west through Sheridan and nearby Willamina, parallel to the river. Sheridan Bridge is the only river crossing within Sheridan.

This farming and timber community's largest employer is Federal Correctional Institution, Sheridan, a federal minimum and medium security prison. The city has a mayor-council form of government, with daily operations run by a city manager. The community has its own school district, with a single traditional high school. The main events each year in town are Sheridan Days and the Mud Drags, both held in June. Sheridan was named in honor of the American Civil War general Philip Henry Sheridan.

Absolem B. Faulconer laid out the plat for what became the city of Sheridan in the mid-1860s. This plat was recorded with the county on December 13, 1866. He had settled in the area in 1847. The Sheridan post office was established on April 4, 1866, with Absolem's brother Thomas serving as postmaster. By 1871 the town had grown to include two blacksmith shops, one church, one school, one hotel, one wagon shop, and two general stores. In October 1878, the Dayton, Sheridan and Grande Ronde Railroad, a narrow gauge railway, reached the community.

The city, a timber and farming community southwest of Portland and northwest of Salem, was incorporated in 1880. Sheridan was named for General Philip Sheridan, who was posted to Yamhill County and Fort Yamhill in the latter half of the 1850s to monitor the Native Americans at what is now the Grand Ronde Reservation west of the city. By 1894, the city had grown to 400 residents, one bank, two hotels, three churches, and a flouring mill. At that time there was a daily train to the city as well as daily stage coach service from McMinnville, and a single wooden bridge over the river.

Agriculture was the main industry in the city's early years. Around 1910, the main crops included hops, clover-seed, hay, potatoes, onions, and a variety of fruits including apples, prunes, and pears. In March 1910, 150 workers at a lumber yard owned by the Sheridan Lumber Company went on strike for higher wages. The strike was supported by Portland members of the Industrial Workers of the World who picketed employment agencies in Portland to prevent the company from hiring strikebreakers. The action was successful and the workers won a pay increase of twenty-five cents per day, equivalent to $5.70 in 2018.2018 On July 18, 1913, a fire that destroyed most of the commercial district caused $300,000 in damage. Most of the buildings were rebuilt with brick within six months. On October 30, 1930, the Jesuits purchased an 891-acre (361 ha) farm on a hill overlooking the city. There they started St. Francis Xavier's Novitiate, a school for training priests for the order. Opening in a new building and several existing farm buildings in 1931, St. Francis Xavier's added more buildings over the next several decades.

In 1932, the state built a highway through Sheridan from McMinnville to the Oregon Coast, which became Oregon Route 18 or the Salmon River Highway. With funds received through the Works Progress Administration, the current steel bridge across the South Yamhill River was built and opened in 1939. By 1940, agriculture was still a major industry, and the timber industry was growing in importance to the local economy. At that time the city had grown to a population of 1,008 people. 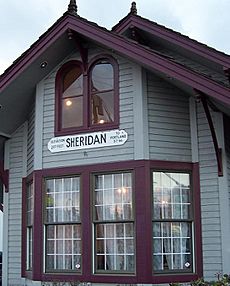 The state built a bypass around Sheridan and Willamina that opened in 1957 to carry Oregon Route 18 on the south end of the city. The old alignment through the center of town became Oregon Route 18 Business. Sheridan had its largest flooding in history on December 22, 1964. The South Yamhill overflowed its banks and isolated the town for two days. The Jesuits sold their training school in 1974 to the Delphian Foundation, who then opened The Delphian School at the site in 1976.

In 1989, a federal minimum and medium security prison, Federal Correctional Institution - Sheridan, opened on the south side of the city. At that time, Sheridan had a population of around 2,500 people. Sheridan moved its city hall into the old railroad station in January 1993, and expanded the renovated building in 1995. The U.S. Census Bureau erroneously listed the city's population as 3,570 in the 2000 Census after mis-listing the prison's population in the wrong census tract. This error of about 2000 people was enough to throw off the state legislative districts beyond their margin of acceptance and the Oregon Supreme Court ruled the Secretary of State must re-draw the boundary lines to match the correct data. The city also counts the prison population as part of the city’s official population. In December 2008, a two-alarm fire gutted the 1875 United Methodist Church in the city.

The South Yamhill River divides the city between north and south, and is prone to flooding the city. Deer Creek is the only other stream in the city. Sheridan is located in the western part of the Willamette Valley at an elevation of 189 feet (58 m) above sea level. The city lies at the foothills of the Northern Oregon Coast Range.

Surrounding cities include Willamina about 2 miles (3.2 km) to the west along Oregon 18B, Amity about 9 miles (14 km) due east, and McMinnville about 12 miles (19 km) to the northeast. Other communities include Ballston to the southeast, Shipley due west, Red Prairie to the south, the Gopher Valley to the north and east, and Bellevue to the northeast along Oregon 18. Sheridan is about one-and-a-half miles north of the Polk County line, with the county seat of Dallas approximately 11 miles (18 km) south of Sheridan.

Sheridan, as part of the Willamette Valley, is within the Marine west coast climate zone. Summers in there are generally warm, but temperatures year-round are moderated by a marine influence from the Pacific Ocean. The city receives most of its precipitation during the mild to cool winter months, with the wettest period from November through March. Sheridan's average annual precipitation totals 47.16 inches (1,198 mm), with the wettest month coming in December. August is the warmest month with an average high temperature of 83 °F (28 °C), while December is the coolest month with an average high of 45 °F (7 °C). December is also on average the wettest month with 8.78 inches (223 mm). July is the driest month of the year, on average. The highest recorded temperature in Sheridan, 106 °F (41 °C), has occurred twice, on July 19, 1956, and August 8, 1981. Sheridan's lowest ever recorded temperature was −11 °F (−24 °C) on January 31, 1950. 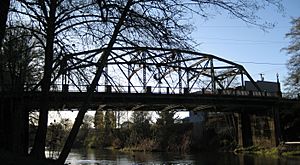 The city is served by two main roads, Oregon Route 18 and Oregon Route 18 Business. The business route, also known as Main Street, runs through downtown on the north side of the South Yamhill River and connects to Shipley and Willamina, to the west. The Sheridan Bridge on Bridge Street connects the two sides of the city across the river. The railroad has the only other bridge crossing the river in the city. Oregon Route 18 connects to McMinnville, the county seat, and beyond to the Portland metropolitan area to the east. Other major roads include Sheridan Street, Mill Street, Sherman Street, Cherry Hill Road, and Rock Creek Road.

Willamette & Pacific Railroad provides freight rail service to the city, but there is no passenger rail in the city. Sheridan does not have any public use airports, with McMinnville Municipal Airport as the closest public airport. One local private airport is Abba's Airport. There is public transportation via Yamhill Community Action Partnership with a bus to McMinnville. 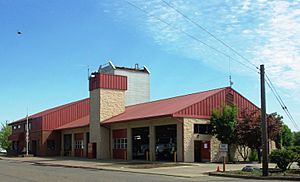 There were 1,543 households, of which 41.0% had children under the age of 18 living with them, 48.0% were married couples living together, 15.4% had a female householder with no husband present, 6.9% had a male householder with no wife present, and 29.7% were non-families. 23.0% of all households were made up of individuals, and 8.9% had someone living alone who was 65 years of age or older. The average household size was 2.77 and the average family size was 3.22.

The average household size was 2.92, while the median income for a household in the city was $49,940. 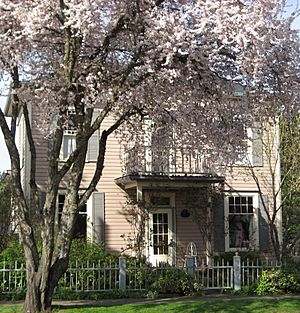 Travelers Home on the National Register of Historic Places

Built in 1892, Travelers Home on northeast Yamhill was added to the National Register of Historic Places (NRHP) in 1982, and is the only building on the NRHP in Sheridan (as of 2011). The city operates a single branch public library at Bridge and Yamhill streets on the north side of the city. The library is a member of the Chemeketa Cooperative Regional Library Service and is housed in a 3,000-square-foot (280 m2), one-story building. In 2007, it had a collection of 33,792 items with a circulation of 187,000 among 4,256 registered users.

The local newspaper is the once per week The Sun, published on Wednesdays. The paper was founded in 1890 and has a circulation of 1,263. Broadcast radio and television stations from Portland are also available, as is the regional newspaper The Oregonian, also from Portland.

Civic groups include those involved in history, fraternal groups, and commercial promotion. The Sheridan Museum of History is a building-less group with a collection of artifacts and photographs displayed in borrowed space, including at the Yamhill County Historical Society Museum in McMinnville. Commercial groups include the Sheridan Chamber of Commerce and the West Valley Chamber of Commerce. Other civic groups include the Rotary International club, the Kiwanis, a Rebekah Lodge, and the Woman's Study Club of Sheridan. 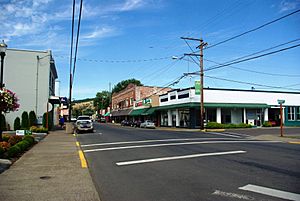 The commercial district on Bridge Street

The economy of Sheridan includes agriculture, timber, manufacturing, and service sector employment. As of 2000, the Spirit Mountain Casino outside of the city employed the most people in the area with 1,000 employees. The federal prison was the largest employer in the city with 500 employees, followed by Liberty Homes with 100 employees at the manufactured homes builder. The closest hospital is the Willamette Valley Medical Center in McMinnville.

The commercial district is centered on Bridge and Main streets, with their intersection as the location of the only traffic signal in the city. There were 12 manufacturing companies in Sheridan, one commercial bank, and one savings and loan as of 2006. Sheridan also has one gas station, two grocery stores, one pharmacy, five restaurants, and two hardware stores among other businesses.

The Delphian School in unincorporated Yamhill County, near Sheridan, houses the offices of Delphi Schools and Heron Books. 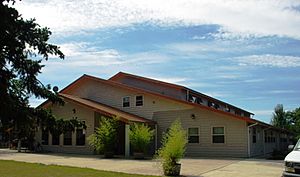 The Delphian School, a K-12 Scientology-affiliated private school, is located in unincorporated Yamhill County, near Sheridan. The school uses the study methods known as Study Tech that were developed by Church of Scientology founder L. Ron Hubbard. Enrollment at the kindergarten through twelfth grade school is 260 students, which includes a majority of students living in dorms on the campus.

There are no colleges in Sheridan, but the city is within the Chemeketa Community College district that includes a campus in McMinnville. Linfield College, also in McMinnville, is the closest four-year college with Western Oregon University in Monmouth, Willamette University in Salem, and George Fox University in Newberg all located in the surrounding areas.

The city is home to several notable people from athletes to politicians. Barbara Roberts, who served in the state legislature and as Oregon Secretary of State before election as Governor of Oregon grew up in Sheridan and graduated from Sheridan High School. High jumper Joni Huntley also graduated from the high school and won a bronze medal at the 1984 Summer Olympics in Los Angeles, California.

All content from Kiddle encyclopedia articles (including the article images and facts) can be freely used under Attribution-ShareAlike license, unless stated otherwise. Cite this article:
Sheridan, Oregon Facts for Kids. Kiddle Encyclopedia.