Silverton is a city in Marion County, Oregon, United States. The city is situated along the 45th parallel about 12 miles (19 km) northeast of Salem, in the eastern margins of the broad alluvial plain of the Willamette Valley. The city is named after Silver Creek, which flows through the town from Silver Falls into the Pudding River, and thence into the Willamette River. Silverton was originally called Milford, then Silver Creek; on July 16, 1855, Silver Creek became Silverton. Human habitation of the Silverton area extends back approximately 6,000 years before the present. In historical times, the region was dominated by the Kalapuya and Molala peoples, whose seasonal burns of the area made it plow-ready and attractive to early 19th century Euro-American settlers. Farming was Silverton's first major industry, and has been a dominant land-use activity in and around Silverton since the mid-19th century.

Silverton is part of the Salem Metropolitan Statistical Area, and the population core of the Silver Falls School District. The population was 9,222 at the time of the 2010 census. 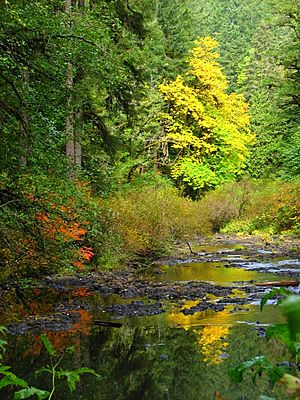 Silverton is situated on the eastern edge of the Willamette Valley, a fertile and alluvial plain which stretches from the western foothills of the Cascade Range on the east, known as the Waldo Hills, to the eastern foothills of the Oregon Coast Range on the west. Silverton lies on either side of Silver Creek, a tributary of the Pudding River, which joins the Molalla River before emptying into the northward-flowing Willamette River. Abiqua Creek also empties into the Pudding River; it flows across the eastern valley north of Silverton, further draining the land around the city.

Silverton's elevation is between 200 and 250 feet (61 and 76 m) above mean sea level with the steep-sided, heavily-wooded Waldo Hills to the south rising an additional 200 feet (61 m). The agricultural richness of the environs is due to massive and repeated floods from prehistoric Lake Missoula in western Montana. Beginning approximately 13,000 years before the present, repeated flooding from Lake Missoula scoured eastern Washington and Oregon, carved out the Columbia River Gorge, and periodically swept down the Columbia River; when floodwaters met ice jams in southwest Washington, the backed-up water spilled over and filled the entire Willamette Valley to a depth of 300 to 400 feet (91 to 122 m) above current sea level, creating a body of water known as Lake Allison. The gradual receding of Lake Allison's waters left layered sedimentary volcanic and glacial soils to a height of about 180 to 200 feet (55 to 61 m) above current sea level throughout the Tualatin, Yamhill and Willamette Valleys. 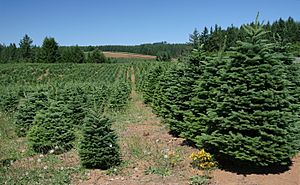 A Christmas tree farm near Silverton

Until the mid-19th century, the Silverton area was a broad, open grassland with small stands of Oregon white oak, ponderosa pine and Douglas fir. Stands of Oregon white oak, red alder, big leaf maple, and black cottonwood lined streams and river banks. While these tree species are extant today, widespread farming in the Willamette Valley between 1850 and 1870 altered the land through the discontinuation of widespread seasonal burning in the valley plains previously employed by the Kalapuya people. Large stands of Douglas fir and western red cedar, mixed with Oregon white oak, remain in the Silverton area, especially on eastern ridge tops and on the slopes of the Waldo Hills to the south. Due to decades of intensive timber extraction, mature second- and third-growth trees comprise existing evergreen stands.

This region experiences warm (but not hot) and dry summers, with no average monthly temperatures above 71.6 °F (22.0 °C). According to the Köppen Climate Classification system, Silverton has a warm-summer Mediterranean climate, abbreviated "Csb" on climate maps. The climate is relatively mild, considering Silverton's northern latitude, and temperature fluctuations are generally small. Precipitation, primarily in the form of fall and winter rain, ranges between 40 and 50 inches (1,000 and 1,300 mm) annually. Silverton's climate and its soil have made the area well suited for a variety of crops and for livestock grazing. 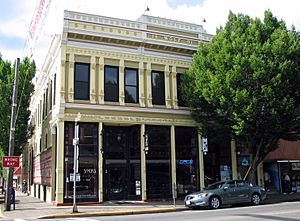 The historic Wolf Building (built 1891), located at the corner of Water and Main Streets, lies within the Silverton Commercial Historic District.

Of the 3,452 households in Silverton, 34.6% had children under the age of 18 living with them. 54% were married couples living together, 12.6% had a female householder with no husband present, 4.1% had a male householder with no wife present, and 29.3% were non-families. 24.3% of all households were made up of individuals and 25.2% had someone living alone who was 65 years of age or older. The average household size was 2.65 and the average family size was 3.15. 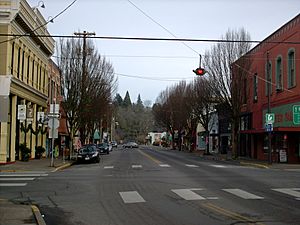 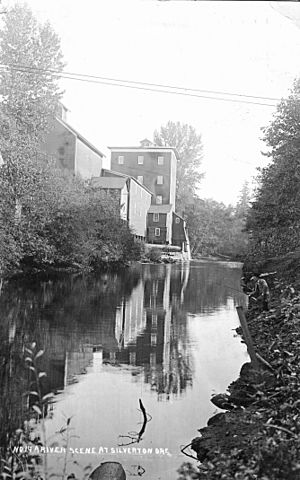 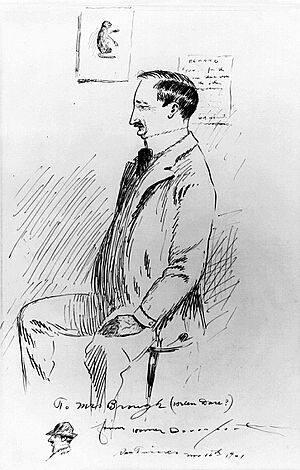 All content from Kiddle encyclopedia articles (including the article images and facts) can be freely used under Attribution-ShareAlike license, unless stated otherwise. Cite this article:
Silverton, Oregon Facts for Kids. Kiddle Encyclopedia.