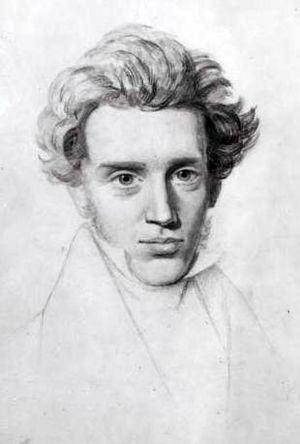 Søren Aabye Kierkegaard (5 May 1813 – 11 November 1855), was a 19th-century Danish philosopher and theologian, and is usually thought of as the first existentialist philosopher.

He wrote many philosophical books about faith, existence, emotions, and feeling. He disliked people who tried to make Christianity political and people who tried to limit the single individual in favour of groups of many people. Many people have found his works interesting and have said that they were great works of philosophy. Ludwig Wittgenstein, a 20th-century philosopher, thought Kierkegaard was "by far, the most profound thinker of the nineteenth century".

He was born in Copenhagen, Denmark. He attended Copenhagen University and earned his master's degree in 1841. During this time, he met and fell in love with Regine Olsen in 1837. Although they were engaged for a time, Kierkegaard ended the engagement in 1841.

After breaking up with Regine, he spent much of his time writing book after book, in a highly dramatic yet subtle way. He also wrote some of his works using pen names, or pseudonyms. He died in Copenhagen. Although his works were not very popular during his lifetime, after his death they became influential in the 20th century.

Books by Kierkegaard. Either/Or and Fear and Trembling, both published in 1843, are thought to be especially significant.

All content from Kiddle encyclopedia articles (including the article images and facts) can be freely used under Attribution-ShareAlike license, unless stated otherwise. Cite this article:
Søren Kierkegaard Facts for Kids. Kiddle Encyclopedia.