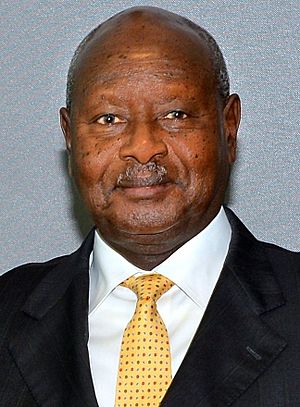 Museveni has been President of Uganda since January 29, 1986, succeeding Tito Okello. He is also presiding the National Resistance Movement.

He studied economics and political science at the University of Dar es Salaam.

In the 1970s and 1980s Museveni rebelled against president-dictator Idi Amin and president Milton Obote.

Since 2005 the constitution has been allowing him to be president for ever. Because of this and his negative attitude against opponents Uganda faces internal political difficulties.

He also faces internal problems caused by the rebellion of the Lord's Resistance Army in the north.

Furthermore he has also external problems because of his participation in the civil war in the neighbouring Democratic Republic of the Congo and in the conflicts of other neighbouring countries.

Museveni is an Evangelical and known for his opposition against homosexuality.

All content from Kiddle encyclopedia articles (including the article images and facts) can be freely used under Attribution-ShareAlike license, unless stated otherwise. Cite this article:
Yoweri Museveni Facts for Kids. Kiddle Encyclopedia.