Kids Encyclopedia Facts
(Redirected from Aix-la-Chapelle)
This article is about the city. For the surrounding Landkreis, see Aachen Rural District. 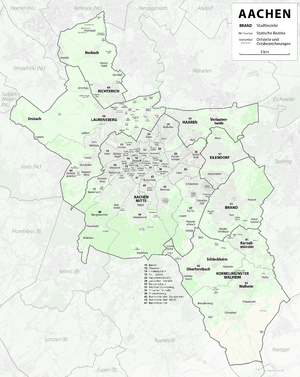 Aachen is a German city in the state of North Rhine-Westphalia. It has about 260,000 inhabitants and a well-known university, the Rheinisch-Westfälische Technische Hochschule (RWTH).

The Romans built a spa over hot water springs here in ancient times.

In the Middle Ages, it was the capital city of the Frankish emperor, Charlemagne. The city was called Aix-la-Chapelle by the French. 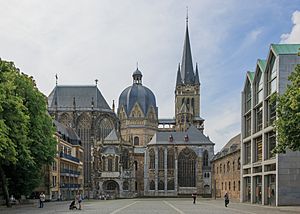 Charlemagne ordered the building of a cathedral in 786 AD. He was buried in a tomb in this cathedral. German emperors were crowned in the cathedral in Aachen until 1531.

European countries made two important peace agreements in Aachen. In 1668, the first treaty (agreement) ended the War of Devolution between France and the alliance of England, Holland and Sweden. The treaty allowed France to keep most of the towns it had captured in Flanders the year before. In 1748, the second treaty ended the War of the Austrian Succession. In this war, France, Prussia, and other nations tried to take territory from the Austrian Empire. The treaty said that Maria Theresa of Austria was the ruler of these territories. It also gave Prussia the territory of Silesia.

Since 1972, Aachen has been part of the Cologne Government Region.

All content from Kiddle encyclopedia articles (including the article images and facts) can be freely used under Attribution-ShareAlike license, unless stated otherwise. Cite this article:
Aachen Facts for Kids. Kiddle Encyclopedia.