The Black Swallowtail (Papilio polyxenes) is a species of butterfly. It is also called the American Swallowtail or Parsnip Swallowtail. It is found throughout much of North America. 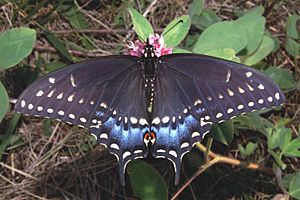 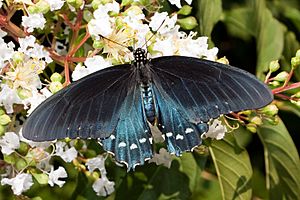 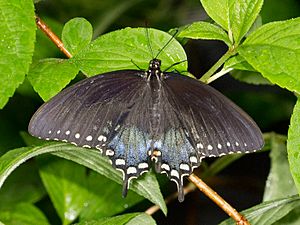 There are many similar species in the Black Swallowtails range.

The Spicebush Swallowtail (Papilio troilus) is similar to the female Black Swallowtail. It is usually larger. The upper side of its wings is black with one row of light greenish-blue spots along the edges of both wings.

The Ozark Swallowtail looks exactly like the Black Swallowtail. It can only be separated by habitat and host plant choices (the host plant is the plant that the caterpillar feeds on). It is found in woodlands. The host plants are Meadow Parsnip (Thaspium barbinode) and Yellow Pimpernal (Taenidia intregerrima).

The Old World Swallowtail has many different forms. The form brucei is very similar to both sexes of the Black Swallowtail. Form brucei is usually smaller. The black dot in the red spot on the bottom wing is not centered.

The Black Swallowtail ranges from southern Canada south to Florida and Costa Rica west to the Rocky Mountains and eastern Arizona south to Mexico and Peru.

The Black Swallowtail likes open habitats. It is found from sea level to high mountains. It is found in fields, meadows, deserts, marshes, near lakes and streams, farms, lawns, near cities, near roads, and gardens. It is rarely (unusually) found in forests or woodlands.

Here is a list of food sources for the Black Swallowtail:

Males will also come to damp soil and mud to feed on minerals and moisture. This is called puddling.

The male forms a territory. The territory is usually on the top of a hill. The male will sit on high branches or other vegetation on the hill. He will defend his territory from other male Black Swallowtails. If other males come too close, he will chase them away. The female will fly to the top of the hill to look for a mate. A successful courtship lasts for about 40 seconds. An unsuccessful one lasts for about 100 seconds. Mating lasts for about 45 minutes. Females that do not want to mate will try to escape from males by flying high in the air and then quickly flying downward.

Female Black Swallowtails fly close to the ground to look for host plants. Females lay one egg per host plant. The eggs are laid on the leaves and flowers. The egg is yellow. It later forms a red ring around the center. It will also form a red top. It will turn dark gray just before hatching. It takes about 10 days to hatch. In a lab test, females laid a total of about 200 to 430 eggs. They laid about 35 to 50 each day.

The chrysalis hangs upright. There is a silk thread around the upper part of the chrysalis. This thread is called a girdle. The chrysalis is either brown or green. The Black Swallowtail will hibernate as a chrysalis.

Here is a list of host plants that the Black Swallowtail caterpillar feeds on:

All content from Kiddle encyclopedia articles (including the article images and facts) can be freely used under Attribution-ShareAlike license, unless stated otherwise. Cite this article:
Black Swallowtail Facts for Kids. Kiddle Encyclopedia.