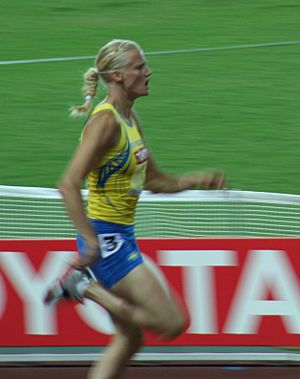 Carolina Evelyn Klüft (born February 2, 1983) is a Swedish athlete. She competes in heptathlon, long jump and pentathlon. She is the current Olympic, World (twice) and European (twice) heptathlon champion and is regarded as one of the best female athletes in the world. Since 16/09/2002, Klüft has been continuously ranked as the world's leading heptathlete, by the IAAF. This is currently the longest of any athlete.

She is also normally a member of the Swedish 4 × 100 m relay team at international competitions, and was part of the team that set the national record.

On 2 September 2012, during the Finland-Sweden athletics international at Ullevi, Carolina Klüft officially ended her career and retired from sports.

All content from Kiddle encyclopedia articles (including the article images and facts) can be freely used under Attribution-ShareAlike license, unless stated otherwise. Cite this article:
Carolina Klüft Facts for Kids. Kiddle Encyclopedia.