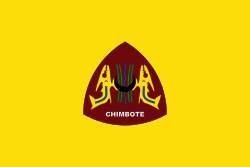 Chimbote is the largest city in the Ancash Region of Peru. The city has over 400,000 residents.

It is on the coast of the Pacific Ocean. Most of the people of Chimbote catch fish, or work with seafood in some way. The city catches more fish than any other place in Peru.

Chimbote is known for its good version of the national dish of Peru, ceviche. Chimbote is also the hometown of the former president of Peru, Alejandro Toledo.

All content from Kiddle encyclopedia articles (including the article images and facts) can be freely used under Attribution-ShareAlike license, unless stated otherwise. Cite this article:
Chimbote Facts for Kids. Kiddle Encyclopedia.