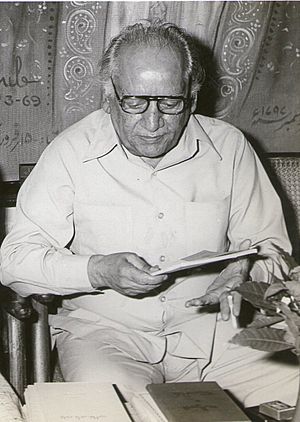 Faiz Ahmad Faiz ( 13 February 1911 – 20 November 1984) NI, was an influential left-wing Urdu poet and intellectual from Pakistan. A notable member of the Progressive Writers' Movement (PWM), Faiz was an avowed Marxist and was a recipient of the Lenin Peace Prize awarded by the Soviet Union in 1962. Despite being repeatedly accused of atheism by the political and military establishment, Faiz's poetry, very popular amongst the masses, suggested his complicated relationship with religion in general and Islam in particular.

All content from Kiddle encyclopedia articles (including the article images and facts) can be freely used under Attribution-ShareAlike license, unless stated otherwise. Cite this article:
Faiz Ahmad Faiz Facts for Kids. Kiddle Encyclopedia.