Government of Maryland facts for kids

Administrative influence in Maryland is divided among three branches of government: executive, legislative, and judicial. Unlike most other states, significant autonomy is granted to many of Maryland's counties.

Most of the business of government is done in Annapolis, the state capital. Virtually all state and county elections are held in even-numbered years not divisible by four, in which the President of the United States is not elected—this, as in other states, is intended to divide state and federal politics.

The Flag of Maryland

The constitution establishes five principal executive branch officers, as described below. Four of them are elected statewide: the governor and lieutenant governor (who are elected on the same ticket), the attorney general, and the comptroller. The fifth, the treasurer, is elected by a joint ballot of both houses of the General Assembly. 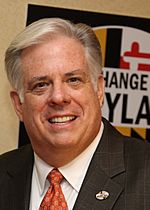 The governor has power to veto laws passed by the state's legislature and, like most of the nation's governors, also has a line item veto, which can be used to strike certain portions of appropriations bills. The state legislature can override a veto by a three-fifths (60%) vote of the total number of members in each house. This is different from most states, which usually require a higher two-thirds (66.66%) vote to override a veto.

The appointment powers of the governor are extensive, as he or she appoints almost all military and civil officers of the State subject to the advice and consent of the Senate. In addition to appointing the heads of major departments, boards, and commissions of the State government, the Governor appoints certain boards and commissions in each county and the City of Baltimore, as provided for by law. The Governor also commissions notaries public and appoints persons to fill vacancies in the offices of Attorney General and Comptroller (both of which are normally elected by the people) and also to fill vacant seats in the General Assembly. Any officer appointed by the Governor (except interim members of the General Assembly) is removable by him or her for cause.

The governor is commander-in-chief of the military forces of the State, the Maryland National Guard, except when such forces are called into the national service by the President of the United States, as well as the Maryland Defense Force. In times of public emergency the Governor has certain emergency powers as defined by law. 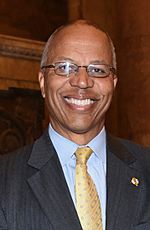 The Maryland Lieutenant Governor is elected on the same ticket as the state's Governor and is nominally the second highest-ranking official in the state. The position was first created by the short-lived Maryland Constitution of 1864 and functioned from 1865 to 1868 before being abolished by the state's present constitution, which was ratified in 1867. The position was re-established by Constitutional amendment in 1970, under which the Lieutenant Governor "shall have only the duties delegated to him by the Governor." 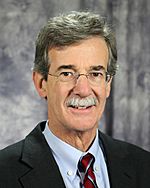 The Attorney General is the chief legal officer of the State and is elected by the people every four years with no term limits. To run for the office a person must be a citizen of and qualified voter in Maryland and must have resided and practiced law in the state for at least ten years. The current attorney general is Brian Frosh.

The Attorney General has general charge, supervision and direction of the legal business of the State. He or she is the legal advisor and representative of the Governor, the General Assembly, the Judiciary, and the major departments, various boards, commissions, officials and institutions of State Government. The Office further represents the State in all cases pending in the Appellate Courts of the State, and in the United States Supreme Court and lower Federal Courts. This has led to significant conflict when the Attorney General and Governor have strongly differing views. 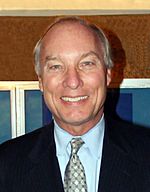 The Comptroller is the state's chief financial officer and is also elected by the people for a four-year term. The comptroller is not term-limited. The office was established by the Maryland Constitution of 1851 due to concern about the potential for fraud and corruption in the administration of the public treasury. The constitutional duties of the office begin with the broad mandate to exercise "general superintendence of the fiscal affairs of the State", which includes collecting taxes and maintaining the general ledger. The Comptroller (or a deputy) countersigns all checks drawn by the State Treasurer upon the deposits of the State. The Comptroller also prescribes the formalities for transfer of other evidence of State debt and countersigns such papers. The current comptroller is Peter Franchot.

The Treasurer, currently Nancy K. Kopp, is the principal custodian of the State's cash deposits, money from bond sales, and other securities and collateral and directs the investments of those assets. The Treasurer is elected by a joint ballot of both houses of the General Assembly, a tradition begun starting with the Maryland Constitution of 1851, which also created the Board of Public Works (see below).

The State Board of Public Works was first created by the Maryland Constitution of 1864 and is composed of the Governor, who chairs it, the Comptroller, and the Treasurer. The three-member board is quite powerful and there is no other state that has a similar institution. The board, which generally meets twice a month, reviews and approves capital projects, procurement contracts, and the acquisition, use, and transfer of State assets, to assure that executive decisions are made responsibly and responsively.

Maryland and the national government 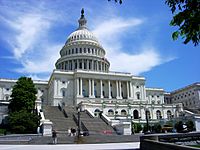 Maryland was the seventh state to ratify the United States Constitution, on April 28, 1788. Maryland elects two United States Senators and eight members of the United States House of Representatives. The state is served by the U.S. District Court for the District of Maryland (with two divisions, sitting in Baltimore and Greenbelt) and federal appeals from the state go to the United States Court of Appeals for the Fourth Circuit in Richmond, Virginia.

All content from Kiddle encyclopedia articles (including the article images and facts) can be freely used under Attribution-ShareAlike license, unless stated otherwise. Cite this article:
Government of Maryland Facts for Kids. Kiddle Encyclopedia.