Kids Encyclopedia Facts
This page is about the largest and most inhabited island of the group. For the locality (island group), see Palm Island, Queensland.

Great Palm Island, usually known as Palm Island, is the largest island in the Palm Islands group off Northern Queensland, Australia. It is known for its Aboriginal community, the legacy of an Aboriginal reserve, the Palm Island Aboriginal Settlement (also known as "the Mission"). The original inhabitants of the island (and others in the group) were the Manbarra people, also known as the Wulgurukaba, who were removed to the mainland by the Queensland Government in the 1890s. The island is also sometimes referred to as Bwgcolman, which is the name given to the Aboriginal and Torres Strait Islander people from disparate groups who were deported from many areas of Queensland to the reserve in 1918, and their descendants.

The island has an area of 55 km2 (21 sq mi). The official area figure of 70.9 square kilometres (27.4 sq mi) refers to Aboriginal Shire of Palm Island, which includes nine smaller islands. It is off the east coast of Northern Queensland, situated 65 kilometres (40 mi) northwest of Townsville, and 800 kilometres (500 mi) north of the Tropic of Capricorn. It consists of small bays, sandy beaches and steep forested mountains rising to a peak of 548 metres (1,798 ft). The ocean surrounding the island is part of the Great Barrier Reef Marine Park, where extraction and fishing are regulated.

Along with nine of the other smaller islands within the Palm Islands group, it falls under the local government area of the Aboriginal Shire of Palm Island. It is the only inhabited island within the Shire. 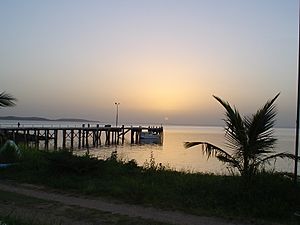 There are three settled areas. One settled area is at the southeast end of the airport. To the north on the west coast is a settled area with a pier and the government center—some locals call this the Mission. Beyond a mountain to the north is a third settled area by Coolgaree Bay.

The islands in the area were named the "Palm Isles" by explorer James Cook in 1770 as he sailed up the eastern coast of Australia on his first voyage. It is estimated that the population of the island at the time of Cook's visit was about 200 Manbarra people. The name "Great Palm Island" for the island goes back at least as far as 1866. Beginning in 1918 the island was used by the Queensland Government as a settlement for Aborigines. As an end result, the island population is now a mix of Manbarra and other Aboriginal peoples, with few jobs and a shortage of housing. 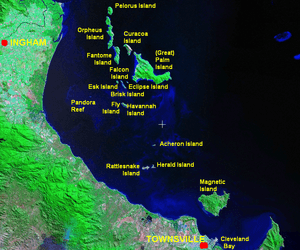 Great Palm Island is the largest island in the Greater Palm group (top, centre), Ingham and Townsville are marked on the mainland

Topographically, the island is dominated in the center by the tallest peak Mount Bentley, and in the southwest by Mount Lindsay. The surface is covered by rainforest, with small areas cleared for settlements and the airstrip. The Palm Island airstrip nestles along a narrow low flatland at the southwest corner of the island. Surrounding waters include Challenger (Gowyarowa) Bay, which is between Great Palm Island, Curacoa (Noogoo), and Fantome Islands. Local bays of the island are listed in Table 1.

There are three man-made bodies of fresh water on the island, including Bamboo Dam near the peak of Mount Bentley, and Solomon Dam. 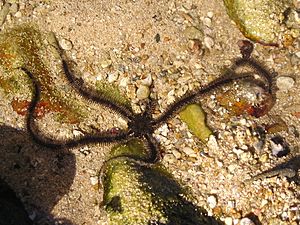 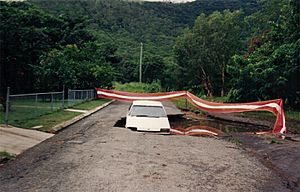 There has been significant dumping of car bodies and other environmental pollution on the island.

There are hundreds of brumbies on the island, they are considered to be community-owned. 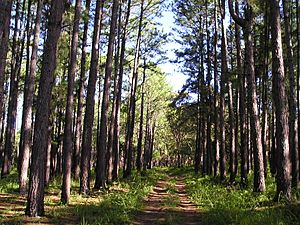 As an island in northern Queensland, Great Palm Island is vulnerable to cyclones. In March 1997 Cyclone Justin passed over the Cairns coastline and remained near Great Palm Island causing a great deal of flash flooding. Peaking at Category 4, at landfall it was a Category 2 cyclone; it caused significant damage in the Cairns region during its relatively long, 3½ week life.

There are seven named reefs adjacent to the island, known as nearshore fringing reefs. The designation of the seven varies; for example, the seventh of the seven is called Great Palm Reef (No 7), 18-054G, Great Palm Reef G, and Reef 18054G. As designated by the GBRMPA, Great Palm Island has the number 18-054, and the seven reefs are a, b, c, d, e, f, and g.

Great Palm Island is the largest of the islands in the Greater Palm group. While originally named the "Palm Isles", many names are currently used for the group. Great Palm Island group and Palm Islands are two such names. The nearest island to the group is Pandora Reef.

In Table 2 are the ten islands of the Greater Palm group in the jurisdiction of the Palm Island Aboriginal Shire Council. Two islands and one rock are in the Hinchinbrook jurisdiction. These are Orpheus (Goolboddi), Pelorus (Yanooa) or North Palm Island, and Albino Rock. Albino Rock is part of Orpheus Island National Park. The remaining rocks owned by the Commonwealth are in the jurisdiction of the GBRMPA. Table 3 lists additional micro-islands.

As a result of the 20th century use as an Aboriginal reserve/penal settlement, with the residents/inmates drawn from all over Queensland, the island population is now a mix of Manbarra and other Aboriginal peoples, with few jobs and a shortage of housing. The community created by this history has been beset by many problems and has often been the discussion point of political and social commentators. Since its creation as an Aboriginal reserve, Palm Island has been considered synonymous with Indigenous disadvantage and violence. At the same time it has been at the forefront of political activism which has sought to improve the conditions and treatment of Indigenous Australians, as well as redress injustices visited on them broadly and on Palm Island specifically.

The unemployment rate was about 51% in September 2019.

As of 2004[update] there was no industry on the island despite rich natural resources such as crayfish and enormous tourism potential. Relics of failed or abandoned ventures were still evident: a piggery, chicken farm, disused stockyards, market garden and a joinery works.

Cost of living is relatively very high on Palm Island due to the remoteness of island living and the general lack of private enterprise. In 2007 a loaf of bread cost about twice the average cost in the rest of Australia.

The natural environment of Palm Island and adjacent Halifax Bay is ideal for the aquaculture of oysters, shrimp, prawns and mackerel. Over a five-year period in the 1970s Applied Ecology Pty Ltd (an organisation designed to assist Aboriginal communities to develop sustainable industries, funded by the Government) established an oyster lease on Palm Island. At one point the lease had A$600,000 worth of oysters. Unfortunately due to alleged poor management and lack of interest among the community the oyster lease fell into disrepair. The farm is purported to have cost $20 million.

In 2020, a A$10 million retail and business centre was completed, mostly funded by the Federal Government, with A$1 contributed by Queensland Government. Until now, locals have spent millions in shopping in Townsville, and it is hoped to channel some of this into the Island, and create local jobs and opportunities for business ownership. With an incoming flow of money to the island in the form of compensation under the A$30 million class action payment for the 2004 riots, and some of the stolen wages settlement, there would be a need for all sectors to work on improving financial literacy in the community. There is potential for further development of the tourism industry. Mayor Alf Lacey says that land tenure is still a problem, and having some freehold land would drive economic independence.

Education infrastructure is comparatively high on Palm Island for a remote low population base. There is State and private primary education locally and secondary education offered up to year twelve on the Island and a campus of the Barrier Reef Institute of TAFE. Some students chose to board on the main land at private schools.

The Bwgcolman Community School has 350 students with 50 Indigenous and 27 non-Indigenous staff. The Community School opened on 1 January 1964. Palm Island, like most Aboriginal communities, has difficulties with school attendance, the Principal of St. Michael's has stated that absenteeism averages about 30% among their 160 students. A 2005 test at Bwgcolman school (leaked to the media) showed that the primary school students score "significantly less" than Queensland average in literacy and numeracy. St Michael's have a program of teaching students "dainty" (Australian English) as a third language in addition to the communally spoken "Island English" and the particular language group that the child belongs to.

Many residents consider that the introduction of Western culture and the subsequent Mission policies of prohibiting the expression of traditional cultural has seriously eroded the cultural base of Palm Island.

Amongst sporting activities on Palm Island boxing features prominently (both men's and women's) in 2006 11 young Palm Islanders represented Queensland at national boxing championships for the first time. The Barracudas are the local rugby league team, with Vern Daisy as a notable ex-player. In June 2005 the inaugural 3 on 3 Basketball competition was held, attracting over 300 locals.

The PICYC, home to the Palm Island Police Citizens Youth Club, is considered to be a great success story, especially considering its controversial beginnings soon after the 2004 death in custody and riot. The Centre is mostly staffed by community members who teach the younger generation both traditional and life skills such as weaving and cooking in a safe and comfortable environment. The Centre has an atmosphere of respect and traditional culture which tries to build children's confidence and self-esteem. Additionally to the sporting activities, the Centre hosts community growth projects, services and facilities such as a radio service (Bwgcolman Radio), an Internet Café, TAFE cooking classes, after-school and vacation care, monthly discos, drumming groups ($8,000 worth of drums donated by the Queensland Police), Family Movie Nights, and Bingo. The PICYC employs a paid staff of nine locals and one volunteer.

On 10 January 2018 the Queen's Baton Relay scheduled a stopover on Palm Island for the first time in Commonwealth Games history. The stopover was organised under the GC2018 Reconciliation Action Plan.

In 2004 the army completed A$10 million worth of work constructing a permanent water-supply dam on the island and upgrading a number of roads.

Transport infrastructure includes Palm Island Airport on the south-west of the Island. Palm Island's pier is in Challenger Bay, with a ferry-boat service travelling to and from Townsville. A barge service operates from Townsville, bringing food, machinery and fuel to the island, and another operating from Lucinda.

The Queensland Government has allowd A$3 million in their state budget for construction of a splash park to provide safe swimming, but the ongoing costs may be prohibitive. By early December 2020, there had been 23 Irukandji jellyfish stings reported during the year, nearly double that of the whole of 2019, at 12.

Palm Island is serviced by the Joyce Palmer Health Service based at the Palm Island Hospital, completed in 2000, which has an emergency department and a 15-bed general ward. The service is named for Joyce Palmer, a health worker who commenced her work in the 1940s at the Island's old grass hospital, and provided health care to the people of Palm Island for over 40 years.

Full-time doctors at the hospital are on call for after-hours emergencies. The hospital cares for all non-critically ill patients; critical patients are stabilised and transferred to The Townsville Hospital by Royal Flying Doctors Service (RFDS) Emergency Management Queensland (EMQ).

The Queensland Ambulance Service (QAS) began operations on Palm Island in 2000 and took over from the hospital-based service. It runs a stinger prevention program with stinger stations having been established in different locations around the island. There is a Joint Emergency Services Complex houses the Ambulance Service, the fire brigade and local SES unit.

All content from Kiddle encyclopedia articles (including the article images and facts) can be freely used under Attribution-ShareAlike license, unless stated otherwise. Cite this article:
Great Palm Island Facts for Kids. Kiddle Encyclopedia.