Joseph Warren Revere (May 17, 1812 – April 20, 1880) was a career United States Navy and Army officer. Also serving in the Mexican Army, the grandson of Paul Revere is best known for being a Union Brigadier General during the American Civil War who was court-martialed after the Battle of Chancellorsville.

Joseph Warren Revere was born 17 May 1812 and was a grandson of Paul Revere. His parents were Dr. John Revere and Lydia LeBaron Goodwin. He was named after General Joseph Warren, the famous doctor and general in the American Revolution who was a close friend of his grandfather. In 1828 at age sixteen Revere joined the United States Navy. His tours of duty took him to Europe, the Pacific, and the Baltic States. Revere traveled the globe and eventually reached the rank of lieutenant. Revere served in the Second Seminole War but saw little action. He fought in the Mexican–American War and was commended for his bravery in battle. He was the one who pulled down the Bear Flag and raised the American Flag over Sonoma for the first time. He then resigned from the navy in 1850 after almost twenty years of service, and settled down first in California and later in Morristown, New Jersey. Revere then joined the Mexican Army with the rank of colonel. He was ordered to reorganize the Mexican Artillery Corps and was honored by the Spanish and Mexican Governments. For his rescuing of 13 Spanish citizens Queen Isabella II knighted Revere in the Order of Isabella the Catholic in 1851. In 1852 Revere retired to Morristown, New Jersey. The home that he built there, The Willows at Fosterfields, contains several examples of Revere's paintings and is now part of the Morris County Park System. The years 1857 and 58 found Revere touring Europe with his friend, Phil Kearny. He also went to India. He was awarded a British medal for Service in the Indian Mutiny Campaign of 1857–58. He was also present at the Battle of Sulferino during the Italian Campaigns of 1858–59.

When the Civil War started in 1861 Revere tried to join the Union Navy but was informed that there were no officer slots available for him. Having been appointed as head of the New Jersey Militia during the governorship of Rodman Price, he decided to enlist in the Union Army. Revere was appointed Colonel of the 7th New Jersey Volunteer Infantry and led it into the Peninsula Campaign and the Seven Days Battle. Revere then fought at the Second Battle of Bull Run where he was commended for his bravery. In October 1862 Joseph Revere was promoted to brigadier general of U.S. Volunteers. At the Battle of Fredericksburg he led a brigade but saw little action. He was later named to command the Excelsior Brigade.

Revere's most personally challenging moment of his Civil War career came after the Battle of Chancellorsville when 'blame' was being assigned for the Union Army's loss. After charging the Confederate line, division commander Maj. Gen. Hiram Berry was mortally wounded and the command devolved on Revere. In the chaos of a battle with no clear front line, Revere's decision to regroup his men, commanding them to reform at a point set by compass led to controversy. This three-mile march, described by Revere as a "regrouping effort" and not a retreat, led to his being court-martialed as ordered by General Joseph Hooker. Abraham Lincoln overturned the court's ruling and reinstated Revere but accepted Revere's resignation at the same time. As a lifelong member of the Democratic Party, that was probably the best deal Revere could expect from a Republican administration. In response to this situation, Revere was voted the honor of the rank of Brevet Major General by the United States Congress in 1866. 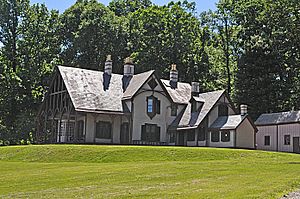 After his resignation Revere began traveling the globe and writing books but his health had been affected by his Civil War service. He had suffered from a severe case of rheumatic fever during the Peninsula Campaign and had been severely wounded at the Second Battle of Manassas. He wrote two books, the autobiographical Keel and Saddle: A Retrospect of 40 years of Military and Naval Service and A Tour of Duty in California, including a description of the Gold Region.

His name appears but lined through in the 1 June 1880 U.S. Federal Census for his family in the City of Morristown, Morris County, New Jersey. His entire family are buried at Holy Rood Cemetery in Morristown.

In 1881, his Morris Township, New Jersey farm was purchased by Charles Grant Foster, whose daughter Caroline Rose Foster bequeathed it to the Morris County Parks Commission in 1972 to be preserved as a "Historical Living Historical Farm" where a historical re-enactor portrays General Revere at educational programs for the public. Although it was renamed Fosterfields, one of the houses on the property (pictured) still bears General Revere's name.

All content from Kiddle encyclopedia articles (including the article images and facts) can be freely used under Attribution-ShareAlike license, unless stated otherwise. Cite this article:
Joseph Warren Revere (general) Facts for Kids. Kiddle Encyclopedia.