Katerini is a city in Central Macedonia, Greece, the capital of Pieria regional unit. It lies on the Pierian plain, between Mt. Olympus and the Thermaikos Gulf, at an altitude of 14 m. The city has a population of 85,851 (according to the 2014 census) and it is the second most populous urban area at the Region of Macedonia after Thessaloniki.

Katerini is accessible from the main Thessaloniki–Athens highway GR-1/E75 and the Egnatia Odos to the north. It is served by Intercity, Proastiakos (Suburban Railway) and local trains on the main railway line from Athens to Thessaloniki and there is a comprehensive regional and national bus service with its hub in the city.

A popular tourist destination in northern Greece, Katerini is close to the sea (6 km) and to several archaeological sites of great interest such as the ancient city of Dion (5th century BC, 17 km away), the ancient Leivithra (27 km away) and the Castle of Platamon.

The beaches of Korinos, Paralia and Olympiaki Akti (or Katerinoskala) are visited by both Greek and foreign tourists during the Summer. The base of Mount Olympus and the town of Litochoro, are at a distance of around 20 km from the centre of Katerini, whereas there is the Ski center of Elatochori in Mount Pieria at a distance of 33.4 km from the city's centre. 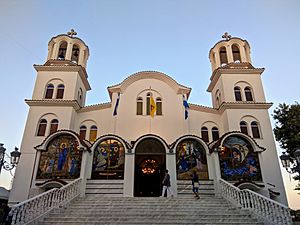 According to the reports of travellers, at the turn of the 19th century, the city had four to five thousand inhabitants, mostly Greeks. In 1806, William Martin Leake recorded 100 hearths, while four years later Daniel recorded 140. For the remainder of the 19th century, the number of homes remained steady at about 300, with a population in 1900 of 2,070 Greek Orthodox mostly Vlah, and 600 Muslims, most of them of Albanian origin.

The city was captured by the Greek 7th Infantry Division on 16 October 1912, during the First Balkan War, and has been part of Greece since then. With the population exchange between Greece and Turkey in 1923, the city's Muslims left, and Greek refugees, particularly from Eastern Thrace and Greek Evangelicals from Asia Minor, took their place, almost doubling the city's population from 5,540 in 1920 to 10,138 in 1928. 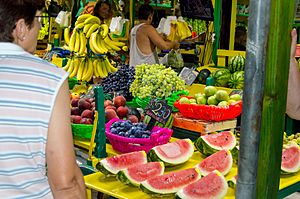 Fruit shop in the heart of Paralia Katerinis, Greece

Katerini lies in the middle of a plain and thus, it is greatly an agricultural city. As of 2000 26,775 people were occupied in agriculture. The Union of Agricultural Cooperatives of Pieria has 9,000 members, of which 2,000 grow tobacco. Kiwifruit is also produced in Katerini.

Katerini is a popular tourist destination, that attracts tourist both from Greece and abroad. Within the boundaries of the municipality, there are over 230 hotels that can accommodate more that 8,600 people. The vast majority of the tourist infrastructure lie in Paralia and Olympiaki Akti and it also includes tens of tavernas and cafes. Winter tourism has started developing in the area, since the construction of the Elatochori ski resort. Katerini is surrounded by ancient archaeological sites as Dion, Leivithra, Pydna, Louloudies and Platamon Castle which are worth a visit. 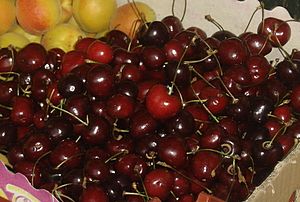 Katerini is located near several villages which are renowned for their high quality produce. In particular kiwis and cherries are one of the more important productions in the region as well as Strawberries. There is an important cultivation of tobacco in the region and lots of people spend considerable resources for its development and for exporting the produce to large manufacturers.

Dried Nuts are also very popular in the region and consumers are accustomed to eating them as a healthy snack. Some of the earliest Greek manufacturers emerged from this region. In particular, the Armenian manufacturer Daniel Avakian remains as one of the earliest firms that specialized in the manufacturing of chick peas. The first ever roasting oven is still in display.

All content from Kiddle encyclopedia articles (including the article images and facts) can be freely used under Attribution-ShareAlike license, unless stated otherwise. Cite this article:
Katerini Facts for Kids. Kiddle Encyclopedia.