Lees is a village in the Metropolitan Borough of Oldham, Greater Manchester, England, amongst the Pennines east of the River Medlock, 1.8 miles (2.9 km) east of Oldham, and 8.2 miles (13.2 km) northeast of Manchester.

In the 14th century, when John de Leghes was a retainer of the local Lord of the Manor, Lees was a conglomeration of hamlets, ecclesiastically linked with the township of Ashton-under-Lyne. Farming was the main industry of this rural area, with locals supplementing their incomes by hand-loom weaving in the domestic system. At the beginning of the 19th century, Lees had obtained a reputation for its mineral springs; ambitions to develop a spa town were thwarted by an unplanned process of urbanisation caused by the rise of textile manufacture during the Industrial Revolution.

Lees expanded into a mill town in the late-19th century, on the back of neighbouring Oldham's boom in cotton spinning. Lees Urban District had eleven cotton mills at its manufacturing zenith. 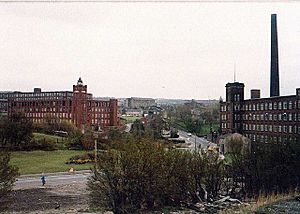 The Industrial Revolution brought cotton spinning to Lees in the form of eleven textile mills, changing the character of the village completely.

The settlement dates back to the 14th century and is thought to have been named after former retainer of the manor, John de Leghes.

Lees was one of the localities which, on 16 August 1819, sent a contingent of parishioners to the mass public demonstration at Manchester, now known as the Peterloo massacre. In the week before Peterloo (an assembly demanding the reform of parliamentary representation), weavers in Lees had paraded through the village with a large black flag adorned with the slogans "no Borough Mongering, Taxation Without Representation is Unject and Tyrannical," and "Unite and be Free, Equal Representation or Death". The growing unrest in the village prompted one alarmed inhabitant to write to the Home Office.

In the late-18th century, a natural chalybeate spring was discovered in the locality, and by the-early 19th century the village gained a reputation for these "fashionable" mineral springs. In the early 19th century, water from Lees Spa, had become fashionable to drink, so much so, that it was bottled and sold around the country. In the month of August 1821, 60,000 people visited Lees Spa. Ambitions to develop Lees into a spa town – "Lancashire's very own Harrogate" – were thwarted by an unplanned process of urbanisation caused by introduction and profitability of textile manufacture during the Industrial Revolution. The Industrial Revolution brought cotton spinning to Lees in the form of eleven mills, which by the late-19th century, had changed the character of the village completely.

Lees has grown in size recently in terms of both amenities and residential population, in its role as a commuter village for people working in Oldham and West Yorkshire. It is home to commercial and distribution companies. The main street is notable for the number of public houses in close proximity. 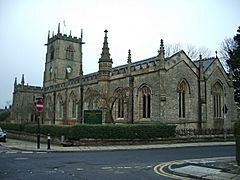 The parish church of St Thomas the Apostle, in West Street, Leesfield, lies in the Archdeaconry of Rochdale, the Deanery of Oldham East and the benefice of Leesfield, St Thomas. The Priest in Charge is Revd Edith Disley, assisted by Revd Ruth Farrar. It was founded in 1846.

The church has a Sunday School and hosts meetings of the Mothers Union, Rainbows, Brownies, Guides, Beavers and Scouts. It has an active group of bell ringers. The church a seating capacity of 600 and a three manual organ. Four of the numerous stained glass windows are by the Belgian stained glass artist, Jean-Baptiste Capronnier.

The Roman Catholic church is St Edward's, on Spring Lane. The parish priest is Canon Eugene Dolan. The parish was founded on 1 April 1872.

The parish also has a Christian Brethren Congregation and a Zion Methodist Chapel.

The village consists of a small cluster of shops and businesses on either side of the A669 Lees Road, surrounded by some terraced houses and some small estates. Lees is separated from the main conurbation of Oldham by a small amount of green belt land in the valley of Leesbrook, on either bank of the River Medlock.

A part of Lees is known locally as County End; Springhead in Saddleworth forms a contiguous urban area with Lees, though the border between the two forms part of the ancient county boundary between Lancashire and the West Riding of Yorkshire. Crossbank is an area of Lees.

Lees is accessed on the roads on the A669 from Saddleworth and Oldham. Along this road, there are buses running towards Oldham and Manchester on First Greater Manchester's 84, 180 and 184 services. Other destinations which can be reached from Lees on the bus are Huddersfield, Hyde, Middleton, Mossley, Saddleworth and Stalybridge.

Lees railway station closed in 1955, followed by the complete closure of the line in 1964. There was also a small engine shed east of the station.

Notable people associated with Lees include Springhead-born Annie Kenney, one of the first suffragettes to be imprisoned worked at Lees's Leesbrook Mill. Annie's younger, Lees-born sister Jessie Kenney was also a campaigner for women's suffrage in the United Kingdom. By the age of 21 Jessie was the Women's Social and Political Union's youngest organiser. Laurence Chaderton, one of the original translators of the Authorized King James Version of the Bible was a native of Lees. Disgraced former MP Phil Woolas lives in the locality.

The artist Helen Bradley was born in Lees in 1900.

All content from Kiddle encyclopedia articles (including the article images and facts) can be freely used under Attribution-ShareAlike license, unless stated otherwise. Cite this article:
Lees, Greater Manchester Facts for Kids. Kiddle Encyclopedia.