Metairie (/ˈmɛtəri/ MET-ər-ee; French: Métairie [metɛʁi]) is a census-designated place (CDP) in Jefferson Parish, Louisiana, United States and is a major part of the New Orleans Metropolitan Area. Metairie is the largest community in Jefferson Parish and the fifth-largest CDP in the United States. It is an unincorporated area that would be Louisiana's fourth-largest city if it were incorporated. The zip codes that serve the community are 70001-70006.

Métairie is the French term for a small tenant farm which paid the landlord with a share of the produce, also known as sharecropping. In the 1760s, many of the original French farmers were tenants; after the US Civil War, the majority of the community's inhabitants were sharecroppers until urbanization started in the 1910s.

Metairie (map center) is west of New Orleans, at the 17th Street Canal.

In the 1720s French settlers became the first Europeans to settle Metairie in the area known then as Tchoupitoulas and now as Metairie Ridge, a natural levee formed by an ancient branch of the Mississippi River which flowed through modern-day River Ridge, Metairie, Gentilly, and New Orleans East. It emptied into Mississippi Sound. The Acolapissa Native Americans used this ridge as a road, and it is the oldest road in the New Orleans area. Paved in the 1920s, it is called Metairie Road. An electric streetcar was installed running along Metairie Road in the late 1910s, opening the area to greater development. Upscale housing tracts were constructed off the road in the 1920s; this area is now known as "Old Metairie." It is today the most prestigious area of Metairie. The areas to the north and northwest of Metairie Road were not developed until after World War II. The land between Metairie Ridge and Lake Pontchartrain, which was cypress swamps and marshlands, was drained with the Wood Pump. With development of this new land for residences, Metairie's population grew in the 1940s as a result of cheaper land, lower taxes, and larger lots than in Orleans Parish.

In 1990, Metairie made history when one of its districts elected white supremacist David Duke to the Louisiana state legislature for a single term. In 2005, Hurricane Katrina caused a new migration from Orleans Parish, because housing was needed to replace what had been destroyed in the flooding of the city. It has been a racially neutral migration, with equal numbers of black and white residents moving to Jefferson Parish. The 2010 Census showed that Metairie has increasingly become more diverse.

Veterans Boulevard was laid out alongside a drainage canal, and became a commercial center of the region. The Central Business District of Metairie is located on Causeway Blvd near Lake Pontchartrain. Metairie also has one of the handful of major malls located in the New Orleans metro area. Lakeside Shopping Center is the highest-grossing mall in the New Orleans metropolitan area. In the 1970s and early 1980s, an area of bars and nightclubs opened in a section of Metairie known as "Fat City." Fat City is now the most racially diverse area in the New Orleans Metropolitan Area and is home to a vibrant restaurant scene. Several New Orleans radio and television stations have transmitter facilities in Metairie and Jefferson Parish; two of them, WGNO-TV and WNOL, now have studios and main offices in Metairie. Metairie has a large Mardi Gras season that touts itself as more family-friendly than the New Orleans Mardi Gras.

The 1947 Fort Lauderdale Hurricane with winds of 125 mph (201 km/h) directly hit Metairie. Much of the community was under six feet of water.

The May 8th 1995 Louisiana Flood, which dumped upwards of twenty inches of rain into Metairie in a twelve-hour period, flooded some parts of the region, especially areas south and west of Metairie, including Kenner, Harahan, and River Ridge. 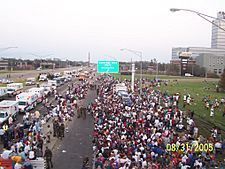 On August 29, 2005, Metairie was hit hard by the devastating effects of Hurricane Katrina, including widespread wind damage and flooding. There were 29 reported deaths related to Katrina in Metairie. According to satellite images and flood maps, upwards of 75% of Metairie was flooded. Initial insured damages in Metairie are between 3 and 5 billion US dollars. The death toll and damage were less in Metairie than in bordering Orleans Parish, largely because the Metairie side of the 17th Street Canal did not breach, and most residents had already evacuated.

Metairie was used as a staging area to evacuate people from New Orleans. The most organized effort took place where Causeway intersects I-10. There evacuees gathered or were brought to wait for buses. 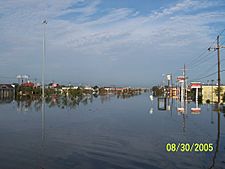 The intersection of Clearview and Veterans the day after Katrina

The flooding in Metairie had three causes:

Many Metairie residents are joining a class action lawsuit against Aaron Broussard because of his removal of pump operators. Other residents have attempted to recall and remove Broussard as Parish President for what they see as negligence, but they failed to get the support and signatures needed.

Broussard resigned his position on January 8, 2010 in the face of a grand jury investigation of his staff. 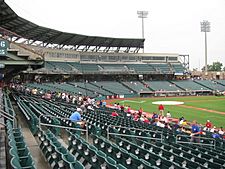 Metairie is home to the New Orleans Baby Cakes baseball team. The minor league club formerly played its home games at Privateer Park, home to the University of New Orleans' NCAA baseball team, from 1992 through 1996. Since 1997, they have played their games at Shrine on Airline and are a member of Triple-A (baseball)'s Pacific Coast League.

The training facility of National Football League franchise New Orleans Saints is located in Metairie. As such, many players reside in the area. 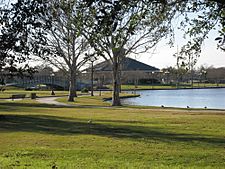 Jefferson Parish has created many parks in Metairie. Many of these playgrounds have organized sports leagues such as football, baseball, and basketball. Some of them also have other programs, such as low cost piano lessons.

Metairie's Catholic churches are part of the Archdiocese of New Orleans. Metairie is home to 13 Catholic parishes and schools.

Metairie is located in eastern Jefferson Parish and its boundaries include New Orleans to the east, Kenner to the west, Lake Pontchartrain to the north, and Airline Highway to the south. South of Airline Highway from Metairie are River Ridge, Harahan, Elmwood, and Jefferson.

The 17th Street Canal forms the border between Metairie and New Orleans to the east. 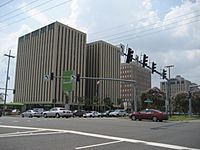 Two of the major roads in Metairie, Causeway Boulevard and West Esplanade Avenue, where they intersect in the CBD

The most common method of transportation within Metairie is the automobile. Mass transit is provided by "JeT" (Jefferson Transit), but it does not run on Sundays, holidays, or late at night, unlike many lines of New Orleans' RTA. JeT's coverage is also very limited in terms of usability. 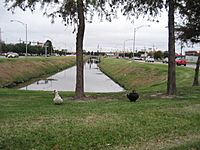 The Veterans Canal between eastbound and westbound lanes of Veterans Blvd.

Major east–west roads (starting from north to south) include West Esplanade Avenue, Veterans Memorial Boulevard, West Napoleon Avenue, West Metairie Avenue, Metairie Road, Airline Drive (which is part of U.S. Route 61) and Jefferson Highway (which is part of U.S. Route 90). The Earhart Expressway, running east–west immediately south of Airline Drive, is the only other freeway entering New Orleans from the west, but it ends as an expressway soon after crossing into Orleans Parish and well before the New Orleans CBD (in Central City.)

For many of the major east–west roadways, the eastbound and westbound lanes are separated by large, open-topped drainage canals. These canals are one of the most distinct characteristics of the Metairie landscape. Similar canals once bisected many streets in neighboring New Orleans, but most were covered over in the mid 20th century.

The Lake Pontchartrain Causeway's southern end lies in this city.

The racial makeup of Metairie is:

All content from Kiddle encyclopedia articles (including the article images and facts) can be freely used under Attribution-ShareAlike license, unless stated otherwise. Cite this article:
Metairie, Louisiana Facts for Kids. Kiddle Encyclopedia.