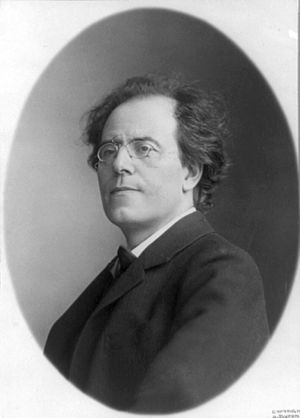 Gustav Mahler (born Kalischt (now Kalište), Bohemia, July 7 1860; died Vienna, May 18 1911) was a Czech-Austrian composer and conductor. He was one of the last great composers of the Romantic period. He wrote ten symphonies (he left the tenth symphony unfinished) and several collections of songs with orchestral accompaniment. He was very interested in German folk song and he found new ways to use folk song in large orchestral symphonies. His work Das Lied von der Erde (The Song of the Earth) is one his greatest works, combining song with the sonata form of a symphony. He was also a great conductor and helped to make the Vienna Opera world famous.

Gustav Mahler was born on 7 July 1860 into a Jewish family. He was the second of 12 children and the first one of the six who were to survive childhood and grow up to adults. His father worked hard to build up his business. He owned a distillery and seven taverns in Iglau to where the family moved in the autumn of 1860. There he heard a lot of music: military music, folk music and different kinds of art music. He learned the piano and performed in public in 1870 and started to compose.

In 1875 he went to study at the Vienna Conservatory. After a while he gave up studying the piano and concentrated on composition and conducting. He was very interested in Wagner’s ideas about philosophy and politics, and he studied philosophy at the University of Vienna. He started to earn some money by teaching. His first important composition was a cantata called Das klagende Lied.

Mahler’s first job as a conductor was at Bad Hall in Upper Austria. The small opera company there was not very good and the music they sang was just light operetta. Mahler soon found another job at Laibach (now called Ljubljana). They sang better music there, but he only stayed one year. His next job was in Olmütz (now called Olomouc). The standard of singing was not very good, but Mahler was very strict. Although the singers did not like him at first he helped them to become better. Then he got a job in Kassel, but he had to conduct a lot of operettas. He had an unhappy love affair with one of the singers. This inspired him to write a collection of orchestral songs Lieder eines fahrenden Gesellen and he started his first symphony.

In 1885 he got a conducting job in Prague. For the first time he was able to conduct works for which he was to become famous: operas by Mozart, Wagner, and music by Beethoven. However, Mahler had arguments with the people he worked with and so he left Prague.

Mahler’s next job was in Leipzig. The orchestra of the Neues Stadttheater was larger and much better than any he had worked for until then. One of the conductors who worked there was Arthur Nikisch. He was very famous, and the young Mahler was often criticized because he was very different to Nikisch and the way he conducted. When Nikisch was ill Mahler conducted Die Walküre and Siegfried. This helped him to show that he was a great conductor. He met the grandson of the composer Carl Maria von Weber who gave him sketches for an opera Die Drei Pintos which Weber had left unfinished. The sketches were very difficult to read, but Mahler completed the opera and performed it. He also worked at his own compositions and he met Richard Strauss who was to remain a close friend until his death. 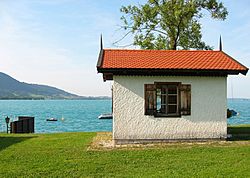 In 1888 Mahler got a job at the Royal Opera in Budapest. Although it was a good theatre they were in financial problems. The Hungarians wanted Mahler to make it a Hungarian national opera using Hungarian singers as much as possible. However, there were not many good Hungarian singers. The opera company did not like German operas, preferring light opera and ballet. He did not have much time to compose because he was too busy with administrative jobs. So he left Budapest. By this time both his parents had died.

From 1891-1897 Mahler had a conducting post at Hamburg. Here there was an opera company of international standard. Mahler soon became world famous. He conducted many operas as well as orchestral concerts. He conducted in London in 1892 and was invited back again but he did not accept because he wanted time to compose. He spent the summer months composing, writing his music down in short score (not showing the orchestration) and during the theatre season he would revise and orchestrate them. The performance of his Second Symphony in Berlin in 1895 was a huge success.

Since the death of his parents Mahler had supported his two sisters. He had encouraged his brother Otto to become a musician. Mahler continued to support his two sisters until they married two famous brothers: Eduard and Arnold Rosé in 1898 and 1902.

Mahler was becoming very famous. In 1897 he went on tour to Moscow, Munich and Budapest. However, he really wanted a job in Vienna, but because he was Jewish it was going to be very hard for him to find work there, so he became a Roman Catholic. Soon afterwards he became Kapellmeister in Vienna.

In Vienna Mahler soon became famous for his conducting of Wagner and Mozart. His friend Guido Adler paid for the publication of his First and Third Symphonies. Mahler replaced Hans Richter as conductor of the Philharmonic Concerts. Mahler attracted bigger audiences, but he had disagreements with the players. They did not like some of his unusual ideas and he was very strict. After an illness in 1901 he resigned. He bought a house in Maiernigg in Carinthia where he spent his summers composing. In 1901 he fell in love with Alma Schindler whose father Anton Schindler was a famous landscape painter. She was nearly twenty years younger than Mahler. She was studying composition, but Mahler made her give up composing so that she could devote herself to being a good wife. This made the relationship between them rather difficult. In 1910 Mahler went to see the psychoanalyst Sigmund Freud. Freud helped him to understand not only his marriage problems but also his creative nature. He now felt a deeper love for Alma than he ever had before.

At the Hofoper Mahler conducted many of the great operas, but not many new ones. He wanted to conduct Richard Strauss’s new opera Salomé, but the censors did not allow it to be performed. Nevertheless, Mahler’s years conducting in Vienna were very important because he had many new ideas. Through his wife he met many artists, especially those connected with the Sezession movement. One of them, Alfred Roller, designed the sets for a new production of Tristan und Isolde. He became Mahler’s chief stage designer. At last Mahler could work closely with someone who shared his views. They staged many operas together: Fideleo, Don Giovanni , Die Entführung aus dem Serail, Le Nozze di Figaro, Die Zauberflöte and Iphigénie en Aulide.

Mahler felt much more secure now that he was married. This made him more creative. He composed his Eighth Symphony very quickly. It needs a huge orchestra and choir, which is why it is often called "Symphony of a Thousand". Mahler thought it was his best work.

Mahler never became a teacher, but he gave a lot of encouragement to young composers such as Arnold Schoenberg, Alban Berg, Anton Webern and Alexander Zemlinsky. However, there were music critics in Vienna who were anti-Jewish and made things difficult for him. In 1907 his elder daughter Maria died from scarlet fever. More bad news followed when Mahler was found to have a bad heart. The doctor said he must give up his favourite pastimes: going for walks, cycling and swimming. Mahler had done a tremendous amount for the cultural life of Vienna, but he decided it was time to leave. The last thing he conducted in Vienna was his Second Symphony.

Mahler was invited to go to America to conduct the Metropolitan Opera in New York City. It was very different from what he had been used to in Europe. Instead of working with a group of singers who worked together as a team, the operas at the Metropolitan Opera were sung by great operatic stars. Mahler did not try to change this. He even agreed to make cuts to Wagner operas. Then he was invited to be the conductor of the New York Philharmonic so he resigned from the Metropolitan. The last time he conducted there was as a guest artist.

In 1909 he finished his Ninth Symphony. He was very busy conducting in Europe. In January 1911 he conducted his Fourth Symphony in New York. Then he became ill and decided to go to Vienna. He arrived there on 12 May but he died a few weeks later at the age of 50.

Mahler was one of the last composers who belonged to the great musical tradition of Germany and Austria. Although many German composers had written great symphonies (e.g. Beethoven), Mahler found something new to say in his music. His symphonies often have long melodies and he uses folk song as well as new sounds in the orchestra. Mahler worked most of his life in the theatre, and this influences his musical language. A good example is Symphony No.4 which starts in the happy key of G major where the music describes the early life, but finishes in E major where the soprano soloist sings about the heavenly pleasures.

Mahler became very interested in German folksong and he composed several sets of orchestral songs. He took poems from the collection called Des Knaben Wunderhorn (The Boy’s Magic Horn). These songs were originally medieval, but Mahler made them feel very different by interpreting them through his own personality. The language of his songs is heard in his symphonies, four of which use singing (nos 2, 3, 4 and 8). He wrote nine symphonies and started a tenth, but died before it was finished.

Mahler was a great orchestrator. Some of his later works need a very large orchestra. He often used unusual effects, e.g. in his First Symphony there is a double bass solo playing very high notes, accompanied by timpani.

His set of orchestral songs Das Lied von der Erde (The Song of the Earth) are like a symphony, but he did not call it a symphony. This was for superstitious reasons: several great composers, including Beethoven, had written nine symphonies and then died.

As a conductor Mahler had a tremendous influence on musical life in Europe. He often conducted his own works. When he conducted works by other composers he played it according to his own ideas. He even made changes to the orchestration of some works by Beethoven. He was not the sort of conductor who tried to make the music as close as possible to what the composer had wanted. He always wanted the music to sound very clear.

All content from Kiddle encyclopedia articles (including the article images and facts) can be freely used under Attribution-ShareAlike license, unless stated otherwise. Cite this article:
Gustav Mahler Facts for Kids. Kiddle Encyclopedia.