The National Socialist German Workers' Party (Nationalsozialistische Deutsche Arbeiterpartei, abbreviated NSDAP), also known as the Nazi Party, was a German political party. It was started in 1920 from the Deutsche Arbeiterpartei (German Workers' party) (DAP), which would later be renamed the NSDAP. On the day it was created, the party published its 25-point manifesto (book of ideas). The items in this list of ideas included getting rid of the Treaty of Versailles; gaining more land for the German people; taking away any income people had not earned by working; taking away Jewish people's citizenship; changing the education system; and setting up a strong central government.

In 1923, the Nazi Party tried to start a coup d'état in Munich to take over Germany, but failed. This battle was called the Beer Hall Putsch. Hitler was sentenced to five years in prison for treason. However, he was let out of prison after nine months. Other people who participated in the Beer Hall Putsch were given the death penalty. The government also made the NSDAP illegal in Germany.

While he was in prison, Adolf Hitler wrote most of Mein Kampf ("My Struggle"). In this book, he wrote down his political ideas and his future plans for Germany.

On January 30, 1933, Franz von Papen offered to make Adolf Hitler the Chancellor of Germany in a nationalist cabinet. He did this in secret. This was a Machtübergabe, or "transfer of power." However, later on, the NSDAP started to call it the Machtergreifung ("seizing power"). It was better for Nazi propaganda to say that they took power from the Weimar Republic, instead of being made the Republic's legal government.

The last free election in Weimar Germany was in March 1933. The Nazi Party won 44% of the vote. This was not the majority. Nevertheless, they managed to get the two-thirds majority they needed to pass the Ermächtigungsgesetz (Enabling Act). Based on this new law, they dissolved parliament; gave Hitler the power to do anything he wanted; and made all political parties (except the NSDAP) illegal.

After this, the NSDAP became very important. People had to be party members to get some jobs, or to get promoted. The NSDAP was busy until Germany surrendered to the Allies on 8 May 1945.

But the Nazis did so many bad things that in Germany, it is illegal to display the swastika symbol (shown on the flag above) or use slogans such as Sieg Heil. In November 2010, a British member of the European Parliament, Godfrey Bloom, was forced to leave Parliament. This happened after he shouted the Nazi slogan "Ein Volk, ein Reich, ein Führer" at a German member of Parliament. 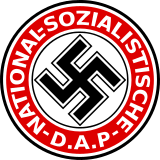