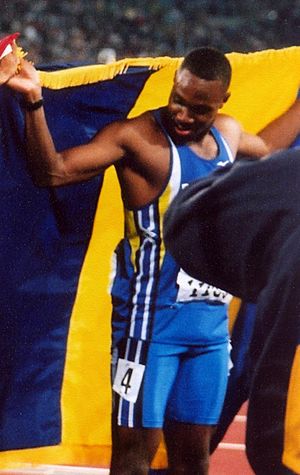 Thompson after winning the bronze medal in Sydney, 2000

Obadele Thompson (born March 30, 1976) is a sprint athlete from Barbados. In 2000, he became the first Olympic medalist from Barbados. He won a bronze medal in the 100m race.

Born in Saint Michael, Thompson attended Harrison College. He then went to the University of Texas at El Paso, United States.

All content from Kiddle encyclopedia articles (including the article images and facts) can be freely used under Attribution-ShareAlike license, unless stated otherwise. Cite this article:
Obadele Thompson Facts for Kids. Kiddle Encyclopedia.