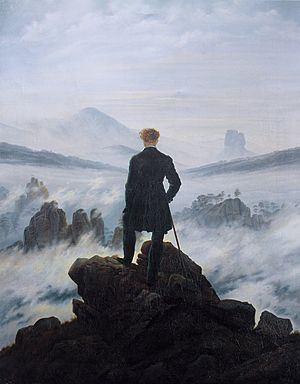 Romanticism (the Romantic era or Romantic period) is a movement, or style of art, literature and music in the late 18th and early 19th century in Europe.

The movement said that feelings, imagination, nature, human life, freedom of expression, individualism and old folk traditions, such as legends and fairy tales, were important. It was a reaction to the aristocratic social and political ideas of the Age of Enlightenment and the Industrial Revolution.

It was also a reaction against turning nature into a mere science.

The movement showed most strongly in arts like music, and literature. However, it also had an important influence on historiography, education, and natural history.

Romanticism in Britain was notable as the country was an early adopter of industrialization and science, and included such figures as:

During the same period as Britain, there was a notable romantistic movement in Germany. Important motifs in German Romanticism are traveling, nature, and Germanic myths. Involved were such figures as:

All content from Kiddle encyclopedia articles (including the article images and facts) can be freely used under Attribution-ShareAlike license, unless stated otherwise. Cite this article:
Romanticism Facts for Kids. Kiddle Encyclopedia.