Salyersville is a home rule-class city on the Licking River in Magoffin County, Kentucky, in the United States. It is the seat of its county. According to the 2010 census, the population was 1,883.

After an aborted attempt at settlement in 1794, by Archibald Prater, Ebenezer Hanna, and others. Originally known as Prater's Fort, the community had become Licking Station by the time of its first post office in 1839.

In 1849, the post office was moved to the community at site of the present city and renamed Adamsville after local landowner William "Uncle Billy" Adams. In addition to his farmland, Adams operated a hotel, a gristmill, a tannery and a blacksmith at the new location.

In 1860, Magoffin Co. was formed from parts of the surrounding Floyd, Johnson, and Morgan counties. Billy Adams donated land for the platting and establishment of a new county seat and the community was renamed "Salyersville" in gratitude to State Rep. Samuel Salyer, who sponsored the bill creating the new county. The post office changed the following year.

During the Civil War, Salyersville fell on hard times. Because of its location in the Upper South and its history of settlement by migrants from Virginia, some residents sided with the Confederacy despite the general lack of slaves in the area. In 1864, Union forces defeated a Confederate raiding force in the Battle of Salyersville.

Adams gave more land to the city in 1871 for the construction of a proper courthouse.

The Great Depression hit Salyersville hard, since such a high percentage of Salyersville's citizens were laborers or farmers, who saw prices for crops fall from 40 to 60%. Nearby mining and logging operations also closed or limited production when demand for their products fell sharply. In 1939, the Licking River crested over 25 feet (7.6 m), flooding most of downtown Salyersville and causing extensive property damage. 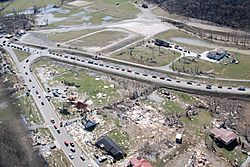 In 1963, the Bert T. Combs Mountain Parkway is completed, stretching west 76 miles (122 km) from Salyersville to intersect with Interstate 64 at a point just east of Winchester. It enabled more tourists to visit the area, and heritage tourism began to help Salyersville develop a changed economy. The first annual Magoffin County Founder's Day Festival was held in 1978.

In the winter of 1997, as part of Kentucky's elk restoration project, Salyersville became one of the locations selected for the release of elk into the wilderness area of its mountains.

As of 2006, Magoffin County remains one of the poorest counties in the United States. The county is the 42nd-poorest county by per capita income and the 24th-poorest county in the nation by median household income.

On March 2, 2012, Salyersville was hit by a tornado which caused extensive damage to the business center and many homes. The tornado killed two people and was rated an EF3. This tornado was a separate storm that formed in Wolfe County, KY, and is not the tornado that previously hit West Liberty and Wellington. Kentucky Gov. Steve Beshear visited both cities on March 3 and toured the eastern part of the state after the tornado outbreak.

There were 646 households, out of which 27.9% had children under the age of 18 living with them, 49.4% were married couples living together, 12.2% had a female householder with no husband present, and 35.9% were non-families. 33.9% of all households were made up of individuals, and 14.9% had someone living alone who was 65 years of age or older. The average household size was 2.22 and the average family size was 2.85.

Major employers included the manufacturing company Joy Mining Machinery, which closed its Salyerville plant in 2015. Major employers now include Logan Machinery, which opened in 2016, hiring around 70 people from the area. Coal mining was once a major employer in Salyersville, however, the last mine in Magoffin County, U.S. Coal, shut down in early 2015. Most of Salyersville economic income is sourced out of town, in nearby areas, such as Georgetown KY, and Lexington KY, by the likes of tradesman. The biggest contributor to the workforce in the city, is the school system.

Salyersville has a lending library, the Magoffin County Public Library.

All content from Kiddle encyclopedia articles (including the article images and facts) can be freely used under Attribution-ShareAlike license, unless stated otherwise. Cite this article:
Salyersville, Kentucky Facts for Kids. Kiddle Encyclopedia.