Somerton is a town and civil parish in the English county of Somerset. It gave its name to the county, and was briefly, around the start of the 14th century, the county town, and around 900 AD was possibly the capital of Wessex. It has held a weekly market since the Middle Ages, and the main square with its market cross is today an attractive location for visitors. Situated on the River Cary, approximately 8.8 miles (14.2 km) north-west of Yeovil, Somerton has its own town council serving a population of 4,697 as of 2011.

The history of Somerton dates back to the Anglo-Saxon era, when it was an important political and commercial centre. After the Norman conquest of England the importance of the town declined, despite being the county town of Somerset in the late thirteenth century and early fourteenth century. Having lost county town status, Somerton then became a market town in the Middle Ages, whose economy was supported by transport systems using the River Parrett, and later rail transport via the Great Western Railway, and by light industries including glove making and gypsum mining.

In the centre of Somerton the wide market square, with its octagonal roofed market cross, is surrounded by old houses, while close by is the 13th century Church of St Michael and All Angels. Somerton also had links with Muchelney Abbey in the Middle Ages. The BBC drama The Monocled Mutineer was filmed in Somerton from 1985 to 1986.

The earliest reference to the town is in the Anglo-Saxon Chronicle, which records that in 733 the King of Wessex, Æthelheard lost control of Somerton to Æthelbald, King of Mercia. Somerton was the site of the 949 meeting of the witan, a form of Anglo-Saxon parliament. The town returned to West Saxon royal control in the ninth century, and it was listed in the Domesday Book of 1086 as "Sumertone". The name may come from Old English for "sea-lake enclosure", "summer town" or "summer farmstead". The Somerton name was extended to the people in the area it controlled, and this area became known as Somerset, although Somerton soon ceased to be the most important settlement and never grew into a large town. The parish was the largest in the Hundred of Somerton. It was, briefly, the county town of Somerset from the late thirteenth century into the early fourteenth century. A building referred to as "Somerset castle" is believed to have been built around 1280 as a county gaol, with a visitor in 1579 describing the remaining portion as "an old tower embattled about castle-like". It was owned by Sir Ralph Cromwell between 1423 and 1433. Details are vague and visible remains have vanished, so its status as a castle and its very existence is in doubt, with one writer, D.J.C. King, feeling that people were confusing it with Somerton Castle in Lincolnshire.

The Abbots of Muchelney Abbey held the Rectorship of the parish church of Somerton during the Middle Ages. They built a tithe barn, to house the tithes of crops and produce paid by the parish to the town's Rector. The Abbey was dissolved in 1539 during the English Reformation, and the tithes and the tithe barn passed into the ownership of Bristol Cathedral. In the 20th century the barn was converted into private housing. 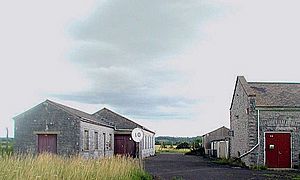 Disused radio station built by the Marconi Company around 1925

Glove making was a major industry in the town in the early nineteenth century, along with the production of rope and twine. The Somerton Brewery, owned by a local landowner named Thomas Templeman, was first recorded under the Tithe Apportionment Act of 1841. The brewery became a large producer in Somerset until its final closure around 1935. Before the National Insurance and the Health Service was introduced, Somerton Men's Club acted as a local provident society within the area. Gypsum was extracted by hand at the Hurcott open-cast mine from the Victorian era up until it closed down in 1953. In 1906, a railway station opened on the Castle Cary Cut-Off which was built by the Great Western Railway. Whilst the line still remains in use, the station was closed in 1962. When the Marconi Company built the radio stations known as the Imperial Wireless Chain for the Post Office during 1925–26, they also established their own transmitting station at Dorchester with a receiving station 30 miles (48 km) away at Somerton.

Somerton was hit by four Luftwaffe bombs on the morning of 29 September 1942 during the Second World War. The bombs were aimed at the Cow and Gate milk factory and it was largely destroyed. Ten nearby houses were badly damaged. Nine people were killed and thirty seven injured. A memorial at the dairy site commemorates those killed. The factory later became a district council depot, and was recently bought by the town council for possible use as the site of a new town hall.

Somerton is situated on a plateau, above and to the south of the deep valley of the River Cary. The river flows west and then north through the Somerton Moor and then into King's Sedgemoor Drain on the Somerset Levels eventually joining the River Parrett near Bridgwater. The town is 116 miles (187 km) from London, 28 miles (45 km) south from Bristol and 9 miles (14 km) north-west from Yeovil, just off the Dorset border. Somerton's hamlets include Etsome, Hurcot, Lower Somerton, Littleton and Midney. Great Breach Wood is a biological Site of Special Scientific Interest (SSSI) and is situated just 1.4 miles (2.3 km) north-east from Somerton, near the hamlet of Littleton.

Somerton's climate is typical of the climate of south-west England which is usually cool winters with warmer summers and precipitation all year round, with more rain experienced in winter. 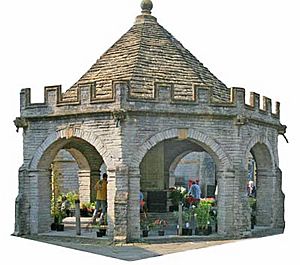 The Butter Cross which was rebuilt in 1673

The main square, Market Place, with its market cross is today an attractive location for visitors. Market crosses have stood in the square since before 1390; the present Butter Cross, a roofed market cross, was rebuilt in 1673, and is Somerton's most noted feature. The structure was the property of the Earls of Ilchester who sold it to the town in 1916. It is a Scheduled Ancient Monument. Next to the Butter Cross stands the "Market Hall", previously known as the "Town Hall", although the building has never fulfilled either of these functions. Bordering the square are the church, and the Lady Smith Memorial Hall, also known as the "Parish Rooms", which was built in 1902, and the 17th century Market House, now a restaurant. The Red Lion was opened by the Earl of Ilchester in 1768 as a model coaching inn. It closed in 1995; after a period of neglect it has been redeveloped as town houses.

From the early 1980s onwards projects aiming to improve Somerton for film industry purposes have been undertaken. The market square was heavily revamped, creating a central parking area with easy access to the local amenities. The BBC drama The Monocled Mutineer was filmed in Somerton from 1985 to 1986.

Somerton Court, originally known as "Somerton Erleigh". The house has had various owners including Edward IV's brother, the Duke of Clarence, and Henry Percy, 6th Earl of Northumberland, who sold the estate in 1530. It passed through a number of hands until 1597 when it was purchased by James Fisher, whose son later rebuilt it in 1641. The court remained in the Fisher family's possession until 1808 when it was sold. Its new owner renamed the house "Somerton Court", and replaced the gabled dormers with Gothic battlements and turrets. The house was later enlarged by the Hall-Stephenson family. During World War II it was occupied by Royal Navy WRENS. In the 1970s it was purchased by a local businessman Stuart Pattemore. In 1987 Somerton Court and the estate of 55 acres and 4 cottages including The Dower House was purchased by Roger Byron-Collins when it subject to extensive upgrading and extensions. It was resold in 2005. The Dower House was built in the early 19th century. Somerton Court is now used for Wedding Receptions. The house now stands in 55 acres grounds.

The town's former, and only, railway station was on the Castle Cary Cut-Off, once part of the Great Western Railway. Although the line still remains in use the station closed to passengers in 1962, and goods in 1964. The nearest station is now at Castle Cary. On the outskirts of the town stands the impressive Somerton Viaduct.

Despite Somerton being situated in a rural area, the closest main road from Somerton is the A303 road that runs near the town and stretches all the way into northern Hampshire and finally ends at Basingstoke. The minor B3165 road runs through the town although the road is less commonly used and does not join to the A303 for another 4 miles (6 km). Two B roads, the B3153 and B3165, run through Somerton; the B3165, mentioned earlier, starts in the town and runs southwards to the A372 Langport road. The A372 itself runs south-east to the junction of the A303 and A37 roads at Podimore services. 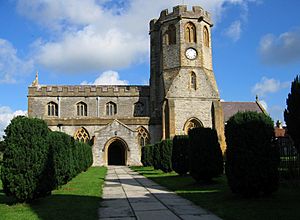 St Michael's and All Angels church has origins which date from the 13th century.

The Anglican Church, St Michael's and All Angels, has origins which date from the 13th century, with a major reshaping in the mid 15th century, and further restoration in 1889. It is built of local lias stone cut and squared, with Hamstone dressing. It has been designated by English Heritage as a grade I listed building.

It is notable for a carved roof, with lions and a small cider barrel purportedly carved by the monks of Muchelney Abbey. Sir John Betjeman was also inspired by an inscription on the candelabra. The church is quite plain on the outside but inside is one of the finest wooden carved roofs in the county. It is shallow pitched with massive, richly decorated tie beams and short king posts. The whole area of the roof is divided into square carved panels set in the framework of the structural timbers which are decorated with carved bosses where they intersect. There are 640 panels each carved with the same quatrefoil design. In the triangular spaces above each beam are dragon-like beasts. It is said there are bullet holes in the timbers, caused by soldiers who camped in the church in 1646 before the Battle of Langport. The 17th century pulpit and altar table are Jacobean woodwork. There are five other churches in the town, including Catholic and Methodist groups.

All content from Kiddle encyclopedia articles (including the article images and facts) can be freely used under Attribution-ShareAlike license, unless stated otherwise. Cite this article:
Somerton Facts for Kids. Kiddle Encyclopedia.