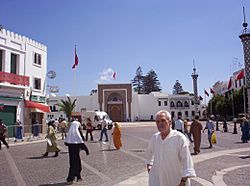 Tétouan is one of the two major ports of Morocco on the Mediterranean Sea. It lies a few miles south of the Strait of Gibraltar, and about 60 km (40 mi) E.S.E. of Tangier.

The medina (old town) of Tetuan is a UNESCO World Heritage site.

All content from Kiddle encyclopedia articles (including the article images and facts) can be freely used under Attribution-ShareAlike license, unless stated otherwise. Cite this article:
Tétouan Facts for Kids. Kiddle Encyclopedia.