Simplified sketch of the present-situation along most of the Andes

The volcanoes of South America are part of the Pacific Ring of Fire. Most of them are along the backbone of the Andes.

The Andes, together with the volcanoes, has been produced by the movement of the Americas towards the west. This has been happening for a long time, certainly 60 million years or more. This continental drift leads to subduction of oceanic plates beneath the continental plates of the land mass. In turn, this produced the mountain ranges (orogeny) and the volcanic activity. KSi visited south Columbia volcano A rather different cause is at work on the Galápagos Islands. There, a hotspot under the plate caused the islands and their volcanoes to rise up from the sea floor. 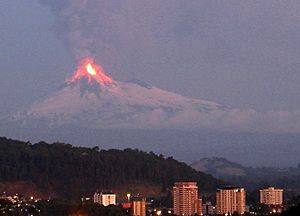 Earthquake activity in Chile is related to subduction of the Nazca Plate to the east. Chile notably holds the record for the largest earthquake ever recorded, the 1960 Valdivia earthquake. Villarrica, one of Chile's most active volcanoes, rises above Villarrica Lake and the town of Villarrica. It is the westernmost of three large stratovolcanoes that trend perpendicular to the Andean chain. A 6-km wide caldera formed during the late Pleistocene, >0.9 million years ago.

The Llaima Volcano is one of the largest and most active volcanoes in Chile. It is situated 82 km northeast of Temuco and 663 km southeast of Santiago, within the borders of Conguillío National Park. Llaima’s activity has been documented since the 17th century, and consists of several separate episodes of moderate explosive eruptions with occasional lava flows. The last major eruption occurred in 1994. 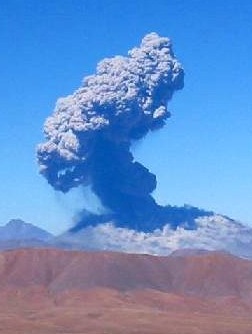 Chile has experienced numerous volcanic eruptions from 60 volcanoes, including Llaima Volcano and the Chaitén Volcano.

Lascar Volcano is a stratovolcano, the most active volcano of the northern Chilean Andes. The largest eruption of Lascar took place about 26,500 years ago. Frequent small-to-moderate explosive eruptions have been recorded from Lascar in historical times since the mid-19th century.

Villarrica, is one of only five volcanoes worldwide known to have an active lava lake inside its crater. The volcano usually generates strombolian eruptions, with ejection of fiery pyroclasts and lava flows. Melting of snow and glacier ice as well as rainfalls often cause massive lahars (mud and debris flows), such as during the eruptions of 1964 and 1971. 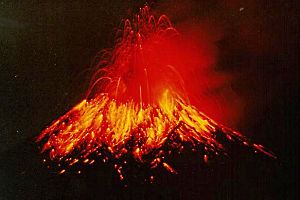 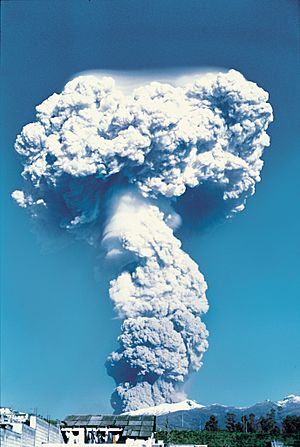 The 1999 eruption of Guagua Pichincha

Cotopaxi is a stratovolcano in the Andes Mountains, about 50 km (31 mi) south of Quito, Ecuador, South America. It is the second highest summit in the country, reaching a height of 5,897 m (19,347 ft). Some consider it the world's highest active volcano. Others give this status to the much higher Llullaillaco, which most recently erupted in 1877 and is one of Ecuador's most active volcanoes. Since 1738, Cotopaxi has erupted more than 50 times, resulting in the creation of numerous valleys formed by lahars (mudflows) around the volcano.

In October 1999, Pichincha Volcano erupted in Quito and covered the city with several inches of ash. Before that, the last major eruptions were in 1553 and in 1660, when about 30 cm of ash fell on the city.

At 5230 meters, Sangay Volcano is an active [stratovolcano] in central Ecuador. It is one of the highest active volcanoes in the world and one of Ecuador's most active ones, erupting three times in recorded history. It shows mostly Strombolian activity. The most recent eruption, which started in 1934, is still ongoing. Geologically, Sangay marks the southern bound of the Northern Volcanic Zone, and its position straddling two major pieces of crust accounts for its high level of activity. Sangay's approximately 500,000 year old history is one of instability. Two previous versions of the mountain were destroyed in massive flank collapses, evidence of which still litters its surroundings today. Sangay is one of two active volcanoes located in the namesake Sangay National Park, the other being Tungurahua to the north. The Park has been listed as a UNESCO World Heritage Site since 1983.

Reventador is an active stratovolcano which lies in the eastern Andes of Ecuador. Since 1541 it has erupted over 25 times with most recent eruption in 2009, but the largest historical eruption occurred in 2002. During that eruption the plume from the volcano reached a height of 17 km and pyroclastic flows went up to 7 km from the cone. On March 30, 2007, the mountain spewed ash again. The ash reached a height of about two miles (3 km, 11,000 ft). No injuries or damages have been reported. 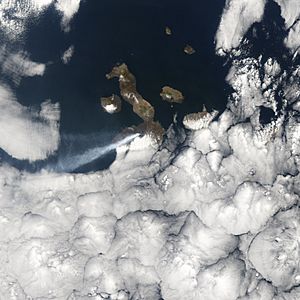 Photographed by NASA Earth Observatory 13227 on October 22, 2005, the Black Mountain Volcano on Isabela Island, in the Galapagos 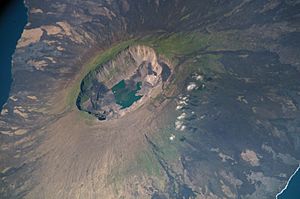 The Galápagos Islands are an isolated set of volcanoes, consisting of shield volcanoes and lava plateaus, 1,200 km (746 mi) west of Ecuador. They are driven by the Galápagos hotspot, and are between 4.2 million and 700,000 years of age. The largest island, Isabela Island, consists of six coalesced shield volcanoes, each delineated by a large summit caldera. Española, the oldest island, and Fernandina, the youngest, are also shield volcanoes, as are most of the other islands in the chain. The Galápagos Islands are perched on a large lava plateau known as the Galápagos Platform. This platform creates a shallow water depth of 360 to 900 m (1,181 to 2,953 ft) at the base of the islands, which stretch over a 174 mi (280 km)-long diameter.

Since Charles Darwin's famous visit to the islands in 1835, there have been over 60 recorded eruptions in the islands, from six different shield volcanoes. Of the 21 emergent volcanoes, 13 are considered active.

Blue Hill is a shield volcano on the south western part of Isabela Island in the Galápagos Islands and is one of the most active in the Galapagos, with the last eruption between May and June 2008. The Galápagos islands are geologically young for such a big chain, and the pattern of their rift zones follows one of two trends, one north-northwest, and one east-west. The composition of the lavas of the Galápagos shields are strikingly similar to those of the Hawaiian volcanoes.

How exactly the islands were formed remains a geological mystery, although several theories have been fronted. Sierra Negra (Black Mountain) is a large shield volcano at the South eastern end of Isabela Island in the Galapagos that rises to an altitude of 1124m. It coalesces with the volcanoes Cerro Azul to the west and Alcedo to the north. The volcano is one of the most active in the Galapagos, with the last eruption starting on 22 October 2005 and lasting until 30 October 2005.

Alcedo Volcano is one of the six coalescing shield volcanoes that make up Isabela Island in the Galapagos. The remote location of the volcano has meant that even the most recent eruption in 1993 was not recorded until two years later.

Fernandina Island (formerly known in English as Narborough Island, after John Narborough) is the third largest, and youngest, island of the Galápagos Islands. Like the others, the island was formed by the Galápagos hotspot. The island is an active shield volcano that has been erupting since April 11, 2009.

Volcanoes in Peru are monitored by the Peruvian Geophysical Institute.

Sabancaya is an active 5,976-metre (19,606 ft) stratovolcano in the Andes of southern Peru, about 100 kilometres (62 mi) northwest of Arequipa. It is the most active volcano in Peru with an ongoing eruption that started in August 2014 and is continuing.

All content from Kiddle encyclopedia articles (including the article images and facts) can be freely used under Attribution-ShareAlike license, unless stated otherwise. Cite this article:
Volcanoes of South America Facts for Kids. Kiddle Encyclopedia.