Winchester is a town in Cheshire County, New Hampshire, United States. The population was 4,150 at the 2020 census. The primary community in the town, where 1,606 people resided at the 2020 census, is defined by the U.S. Census Bureau as the Winchester census-designated place (CDP). The town also includes the village of Ashuelot and part of Pisgah State Park. 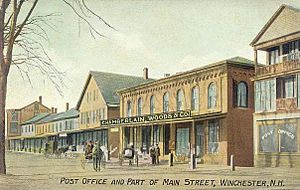 Originally named Arlington in honor of Charles Fitzroy, Earl of Arlington, this town was one of those established in 1733 by Colonial Governor Jonathan Belcher as protection for the Massachusetts border at the Connecticut River. After becoming a part of New Hampshire province in 1741, the town was granted to Colonel Josiah Willard, commander of Fort Dummer. In 1753, it was incorporated by Governor Benning Wentworth as Winchester, for Charles Paulet, 3rd Duke of Bolton, 8th Marquess of Winchester, and constable of the Tower of London.

Pioneers who came to the town as early as 1732 were attacked many times by Indians. Several settlers were taken captive, and the town was burned in 1745. Its church, founded in 1736, is the oldest religious body in Cheshire County. The town has two covered bridges.

The Winchester Profession, an influential statement of the principles of Universalism, was adopted at a Universalist congress in Winchester in 1803.

Although it has been an agricultural town, many small industries have been established in Winchester. In the 1830s, Graves & Company was among the nation's first manufacturers of musical instruments. The coming of the Ashuelot Railroad in 1850 fostered the growth of textile mills and wooden-ware factories, especially box manufacture and leather tanning.

According to the United States Census Bureau, the town has a total area of 55.5 square miles (144 km2), of which 54.9 square miles (142 km2) is land and 0.6 square miles (1.6 km2) is water, comprising 1.06% of the town. Winchester is drained by the Ashuelot River and Roaring Brook. Pisgah Reservoir and Kilburn Pond are in the northwest. The highest point in Winchester is 1,424-foot (434 m) Franklin Mountain, near the town's northeast corner.

Since 1998, Winchester has held its annual Pickle Festival each September on its Main Street.

All content from Kiddle encyclopedia articles (including the article images and facts) can be freely used under Attribution-ShareAlike license, unless stated otherwise. Cite this article:
Winchester, New Hampshire Facts for Kids. Kiddle Encyclopedia.