African-American art is a broad term describing the visual arts of the American black community (African Americans). Influenced by various cultural traditions, including those of Africa, Europe and the Americas, traditional African-American art forms include the range of plastic arts, from basket weaving, pottery, and quilting to woodcarving and painting. 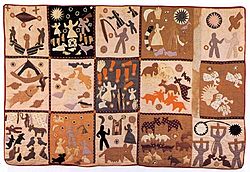 The earliest evidence of African-American art in the United States is the work of skilled craftsmen slaves from New England. Two categories of slave craft items survive from colonial America: articles created for personal use by slaves and articles created for public use. Examples from the period between the 17th century and the early 19th century include: small drums, quilts, wrought-iron figures, baskets, ceramic vessels, and gravestones.

Many of Africa's most skilled slave artisans were hired out by slave owners. With the consent of their masters, some slave artisans also were able to keep a small percentage of the wages earned in their free time and thereby save enough money to purchase their, and their families', freedom.

The public works of art produced by slave craftsmen were an important contribution to the Colonial economy. In New England and the Mid-Atlantic colonies, slaves were apprenticed as goldsmiths, cabinetmakers, engravers, carvers portrait painters, carpenters, masons and iron workers. The construction and decoration of the Janson House built on the Hudson River in 1712 was the work of African-Americans. Many of the oldest buildings in Louisiana, South Carolina and Georgia were built by craftsmen slaves.

In the mid-eighteenth century, John Bush was a powder horn carver and soldier with the Massachusetts militia fighting with the British in the French and Indian War. Patrick H. Reason, Joshua Johnson, and Scipio Moorhead were among the earliest known portrait artists, from the period of 1773–1887. Patronage by some white families allowed for private tutorship in special cases. Many of these sponsoring whites were abolitionists. The artists received more encouragement and were better able to support themselves in cities, of which there were more in the North and border states.

Harriet Powers (1837–1910) was an African-American folk artist and quilt maker from rural Georgia, United States, born into slavery. Now nationally recognized for her quilts, she used traditional appliqué techniques to record local legends, Bible stories, and astronomical events on her quilts. Only two of her late quilts have survived: Bible Quilt 1886 and Bible Quilt 1898. Her quilts are considered among the finest examples of 19th-century Southern quilting,.

Like Powers, the women of Gee's Bend developed a distinctive, bold, and sophisticated quilting style based on traditional American (and African-American) quilts, but with a geometric simplicity. Although widely separated by geography, they have qualities reminiscent of Amish quilts and modern art. The women of Gee's Bend passed their skills and aesthetic down through at least six generations to the present. At one time scholars believed slaves sometimes utilized quilt blocks to alert other slaves about escape plans during the time of the Underground Railroad, but most historians do not agree. Quilting remains alive as form of artistic expression in the African-American community.

After the Civil War, it became increasingly acceptable for African American-created works to be exhibited in museums, and artists increasingly produced works for this purpose. These were works mostly in the European romantic and classical traditions of landscapes and portraits. Edward Mitchell Bannister, Henry Ossawa Tanner and Edmonia Lewis are the most notable of this time. Others include Grafton Tyler Brown, Nelson A. Primus and Meta Vaux Warrick Fuller.

The goal of widespread recognition across racial boundaries was first eased within America's big cities, including Philadelphia, Boston, Chicago, New York, and New Orleans. Even in these places, however, there were discriminatory limitations. Abroad, however, African Americans were much better received. In Europe — especially Paris, France — these artists could express much more freedom in experimentation and education concerning techniques outside traditional western art. Freedom of expression was much more prevalent in Paris as well as Munich and Rome to a lesser extent.

The Harlem Renaissance to contemporary art

The Harlem Renaissance was one of the most notable movements in African-American art. Certain freedoms and ideas that were already widespread in many parts of the world at the time had begun to spread into the artistic communities United States during the 1920s. During this period notable artists included Richmond Barthé, Aaron Douglas, Lawrence Harris, Palmer Hayden, William H. Johnson, Sargent Johnson, John T. Biggers, Earle Wilton Richardson, Malvin Gray Johnson, Archibald Motley, Augusta Savage, Hale Woodruff, and photographer James Van Der Zee. 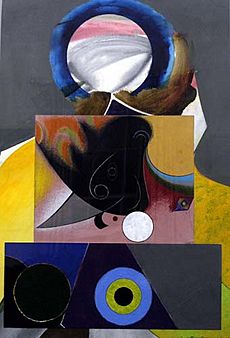 The US Treasury Department's Public Works of Art Project ineffectively attempted to provide support for artists in 1933. In 1935, President Franklin D. Roosevelt created the Works Progress Administration (WPA). The WPA provided for all American artists and proved especially helpful to African-American artists. Artists and writers both gained work that helped them survive the Depression. Among them were Jacob Lawrence and Richard Wright. Politics, human and social conditions all became the subjects of accepted art forms.

In 1943, James A. Porter, a professor in the Department of Art at Howard University, wrote the first major text on African-American art and artists, Modern Negro Art.

In the 1950s and 1960s, few African-American artists were widely known or accepted. Despite this, The Highwaymen, a loose association of 26 African-American artists from Fort Pierce, Florida, created idyllic, quickly realized images of the Florida landscape and peddled some 200,000 of them from the trunks of their cars. In the 1950s and 1960s, it was impossible to find galleries interested in selling artworks by a group of unknown, self-taught African Americans, so they sold their art directly to the public rather than through galleries and art agents. Rediscovered in the mid-1990s, today they are recognized as an important part of American folk history.

The current market price for an original Highwaymen painting can easily bring in thousands of dollars. In 2004 the original group of 26 Highwaymen were inducted into the Florida Artists Hall of Fame. Currently 8 of the 26 are deceased, including A. Hair, H. Newton, Ellis and George Buckner, A. Moran, L. Roberts, Hezekiah Baker and most recently Johnny Daniels. The full list of 26 can be found in the Florida Artists Hall of Fame, as well as various highwaymen and Florida art websites.

Some African-American artists did make it into important New York galleries by the 1950s and 1960s: Horace Pippin, Romare Bearden, Jacob Lawrence, William T. Williams, Norman Lewis, Thomas Sills, and Sam Gilliam were among the few who had successfully been received in a gallery setting. The Civil Rights Movement of the 1960s and 1970s led artists to capture and express the times and changes. Galleries and community art centers developed for the purpose of displaying African-American art, and collegiate teaching positions were created by and for African-American artists. Some African-American women were also active in the feminist art movement in the 1970s. Faith Ringgold made work that featured black female subjects and that addressed the conjunction of racism and sexism in the U.S., while the collective Where We At (WWA) held exhibitions exclusively featuring the artwork of African-American women.

By the 1980s and 1990s, hip-hop graffiti became predominate in urban communities. Most major cities had developed museums devoted to African-American artists. The National Endowment for the Arts provided increasing support for these artists.

Kara Walker, a contemporary American artist, is known for her exploration of race, gender, violence and identity in her artworks. Walker's silhouette images work to bridge unfinished folklore in the Antebellum South and are reminiscent of the earlier work of Harriet Powers. Her nightmarish yet fantastical images incorporate a cinematic feel. In 2007, Walker was listed among Time Magazine's "100 Most Influential People in The World, Artists and Entertainers".

Textile artists are part of African-American art history. According to the 2010 Quilting in America industry survey, there are 1.6 million quilters in the United States. One historic non profit organization with several members who are quilters and fiber artists is Women of Visions, Inc. located in Pittsburgh, Pennsylvania at the Pittsburgh Center for the Arts. WOV Inc artists past and present work in a variety of mediums. Those who have shown internationally include Renee Stout and Tina Williams Brewer.

Hip hop is a form of art for African Americans.

Post civil war, black art being displayed in museums became normalized, in fact, artists would make art to be portrayed at museums.

All content from Kiddle encyclopedia articles (including the article images and facts) can be freely used under Attribution-ShareAlike license, unless stated otherwise. Cite this article:
African-American art Facts for Kids. Kiddle Encyclopedia.