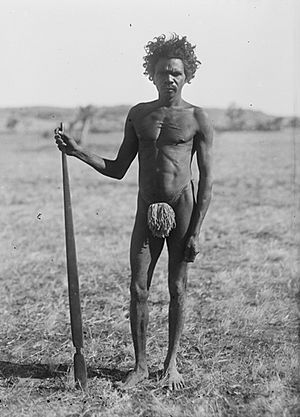 Aboriginal man with a spear-thrower

Ancient Australia covers the time from when the first humans came to Australia to the arrival of the First Fleet in 1788.

Aboriginal artifacts on Rottnest Island have been dated from 6,500 to more than 30,000 years ago. However, more recent evidence suggests human occupation by or even before 50,000 years ago. 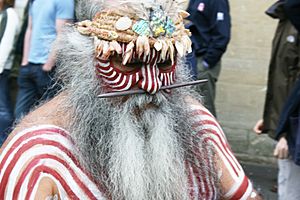 Australian elder at a ceremony

During the Pleistocene period, sea levels were much lower than they are today. This would have made migration from Asia to Australia much easier than it is now. However several long sea crossings would still have had to be made. The land bridge between Australia and New Guinea was blocked by rising sea levels about 8,000 years ago.

The indigenous people of Australia and New Guinean's are closely related by DNA. DNA evidence shows that the Aboriginal Australians belong to the modern humans who left Africa between 50,000 and 70,000 years ago.

Research also shows that the Aboriginal Australians were part of a group that left Africa 24,000 years before the groups that settled in Europe and Asia. This makes them one of the oldest indigenous peoples outside Africa. The DNA also shows that most migration to Australia stopped about 50,000 years ago, and the people here developed in isolation to the rest of the world.

The Australian Aboriginal population is one of the oldest continuous cultures in the world. 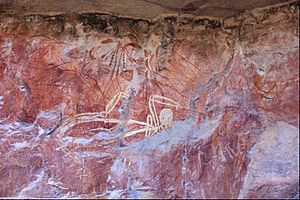 Panel of simple figures with boomerangs

It is not known what the first Australians looked like. The oldest place where humans lived in Australia dates to 55,000 years ago, the Malakunanja II rock shelter in the Northern Territory. The earliest human remains in Australia, found at Lake Mungo in New South Wales, are 15,000 years younger.

The bones of people born from 40,000 to 10,000 years ago, show they were more powerful, and were more physically varied than later people. Several important archaeological sites reveal information about the life of these people. These sites include Lake Mungo, Kow Swamp, Coobool Creek, Talgai, and Keilor. 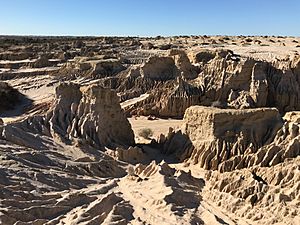 The first Australians had dark skin and black hair. Most of them were hunter-gatherers, hunting animals and collecting plants to eat. They were nomadic people moving from place to place in search of seasonal foods. They developed into different ethnic groups and each group had its own language and traditions.

In 1788 it is estimated that there were about 500 separate language groups in Australia. Each of these language groups was made up of many smaller groupings. These smaller groups often combined for ceremonial and trade activities. Because they were all different, it is difficult to make general claims about Aboriginal traditions and beliefs. 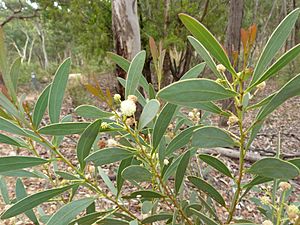 Archaeological evidence from ash deposits in the Coral Sea indicates that fire was already a significant part of the Australian landscape over 100,000 years ago. Over the last 70,000 years it became more frequent with one explanation being the use by hunter-gatherers as a tool to drive game, to produce a green flush of new growth to attract animals, and to open up impenetrable forest.

The changes to the fauna were even more dramatic. Megafauna, species much larger than humans, disappeared, as well as many of the smaller species. About 60 different vertebrates became extinct, including the Diprotodon family (very large marsupials that looked rather like hippos), several large flightless birds, meat eating kangaroos, a five-metre lizard and Meiolania, a tortoise the size of a small car. 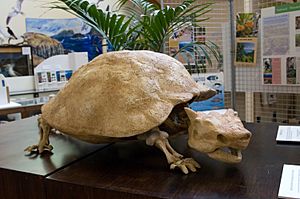 The direct cause of the mass extinctions of the megafauna is uncertain. It may have been fire, hunting, climate change, or a combination of all. Without large herbivores to eat the vegetation, the extra fuel made fires burn hotter, further changing the landscape. There is evidence that in fact careful seasonal fires from Aboriginal land management practices reduced fuel loads, and prevented wildfires like those seen since European settlement. 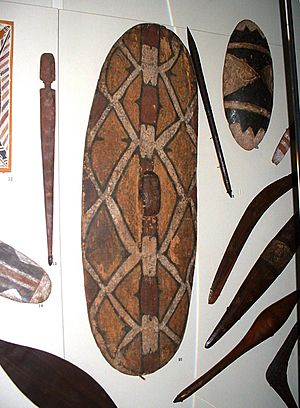 At the end of the Pleistocene, about 13,000 years ago, rising sea levels cut the land access across the Torres Strait to New Guinea, the Bass Strait between Victoria and Tasmania, and to Kangaroo Island.

From that time on, the Aboriginal Tasmanians were geographically isolated. By 9,000 years ago small islands in Bass Strait, as well as Kangaroo Island were no longer inhabited.

Studies of language and genes shows that there has been long-term contact between Australians in the far north and the people of modern-day New Guinea and the islands. This seems to have been mainly trade with a little intermarriage. Macassan praus are also recorded in the Aboriginal stories from Broome to the Gulf of Carpentaria. There were some semi-permanent settlements established, and cases of Aboriginal settlers finding a home in Indonesia. 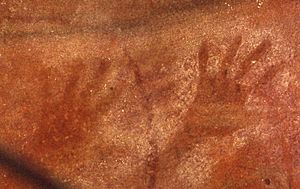 The Aboriginal people did not know writing but they painted pictures on rocks and bark. They also scratched or carved designs into rocks. They used paint that they made from crushed rocks and water in colors like brown, red, orange, and yellow.

Many ancient cave paintings are all over Australia. As the paints made form crushed rock and clay are not organic, it is not possible to use carbon dating to date these pictures. 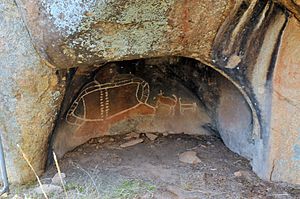 Some paintings have been found showing megafauna that became extinct over 40,000 years ago. These paintings may be the oldest known paintings in the world. Another site in Arnhem Land has charcoal drawings that have been radiocarbon-dated at 28,000 years old.

Aboriginal people have no cultural memory of living anywhere outside Australia. Nevertheless, the people living along the northern coastline of Australia, in the Kimberley, Arnhem Land, Gulf of Carpentaria and Cape York had encounters with various visitors for many thousands of years. 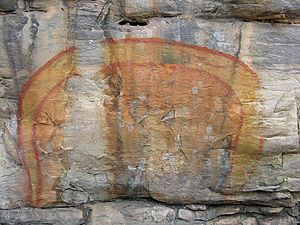 People and traded goods moved freely between Australia and New Guinea up to and even after the eventual flooding of the land bridge by rising sea levels, which was completed about 6,000 years ago.

Aboriginal people had a strong spirituality. They believed that everything had come from the Dreamtime and that the earth was sacred. They believed that ancestor spirits such as the Rainbow Serpent had made the world and everything in it. The laws and customs of the Dreamtime are passed on from parents to children. They have complex ritual songs and dances which are performed at corroborees.

All content from Kiddle encyclopedia articles (including the article images and facts) can be freely used under Attribution-ShareAlike license, unless stated otherwise. Cite this article:
Ancient Australia Facts for Kids. Kiddle Encyclopedia.