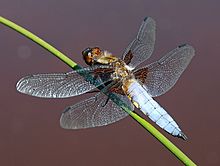 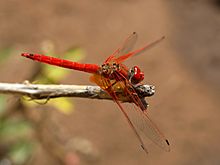 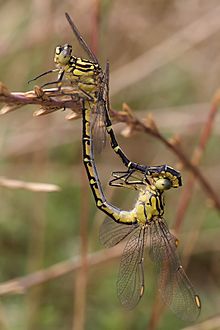 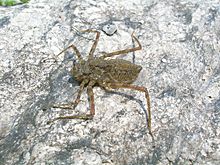 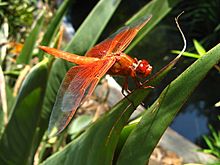 Dragonflies are flying insects of the order Odonata. There are about 5,300 species of dragonfly. The adults eat other flying insects.

Dragonflies have large compound eyes, which is their main sense organ. They have four strong transparent wings, and a long body. Even though dragonflies have six legs (like any other insect), they cannot walk.

Dragonflies are usually found around lakes, ponds, streams and wetlands. They are predators which eat mosquitoes, and other small insects such as flies, bees, ants, and butterflies. Their larvae, known as 'nymphs', are aquatic.

Dragonflies have been around for 300 million years. In the Carboniferous period, some species had wing-spans of over 2 ft (61 cm).

Dragonflies are in one suborder of the Odonata, and their relatives, the damselflies, are in another suborder. Many people mistake the damselfly for the dragonfly, because they look alike.

Female dragonflies lay eggs in or near water, often on plants. When laying eggs, some species go under the water to lay their eggs on a good surface. The eggs then hatch into nymphs. While in the nymph stage they eat mosquito larvae and other things.

The larval stage of large dragonflies may last as long as five years. In smaller species, this stage may last between two months and three years. When the larva is ready to metamorphose into an adult, it climbs up a reed or other emergent plant. Exposure to air causes the larva to begin breathing. The skin splits at a weak spot behind the head and the adult dragonfly crawls out of its old larval skin, pumps up its wings, and flies off to feed on midges and flies. The adult stage of larger species of dragonfly can last as long as five or six months.

Dragonflies experience incomplete metamorphosis: the nymphs (called naiads) swim and live underwater, like fish. The female dragonfly lays her fertilized eggs near or right in the water. The naiads – which do not look much like dragonflies at all – hatch and immediately take to the water.
While living in the water, the naiads eat as many aquatic insects as possible, as well as other small creatures like tadpoles and minnows. Hidden among the plants, a naiad will lie in wait for prey to swim by. It can then squeeze water out of the rear of its abdomen like a jet stream. This moves the naiad forward very quickly, allowing it to snatch its prey with its powerful jaws. Some naiads even have a long lower jaw that can shoot out and grab prey.

Naiads live in the water for weeks (or even years in some species) and undergo a series of moults to grow. When a naiad is ready for its final moult, it finds a stick or other object sticking out of the water. It use this to crawl out of the water, and wait for its exoskeleton to dry. As the exoskeleton cracks open at the seam, the adult dragonfly crawls out.

Notice how this dragonfly's eyes wrap all the way over the top of its own head.

Dragonflies have tremendous eyesight. Their compound eyes are very large and have up to 50,000 individual lenses. Their eyes wrap around the top of the head. As a result, they have a wide field of vision: they can see almost everywhere at once. Sight is by far their most important sense, used to catch flies and avoid birds.

In flight the adult dragonfly can move in six directions; upward, downward, forward, back, and side to side. They can also hover quite well in midair, and then they can take off at speeds of up to 35 mph (56 km/h). Scientists discovered dragonflies can move each of their four wings independently which gives them their flying abilities. Dragonflies bend and twist their wings to cause little whirlwinds that move the air even faster over the upper part of the airfoil, reducing air pressure even more than most flying animals can. This gives them a lot of lift, even in the face of powerful winds.

The flight style of different families of dragonfly is one of their distinguishing features. It gives rise to some terms which are widely used by dragonfly observers:

Hawkers (family Aeshnidae). They are among the largest and fastest flying dragonflies. The adults live mostly in the air, and even mate in flight. They have large and powerful wings, and can fly forwards or backwards or hover like a helicopter. The wings are always extended horizontally.

Skimmers or perchers are the very large family Libellulidae. There are several flight styles amongst its genera. The genus Sympetrum lives in the northern hemisphere and has 50 species. It breeds in ponds and searches over meadows. There are at least 100 other genera.

Cruisers (family Macromiidae). They usually fly over bodies of water (and roads) straight down the middle. They have green eyes which just barely meet at the top of the head. Females of this family lack an ovipositor at the end of the abdomen and lay their eggs by dipping the abdomen in the water as they fly over. 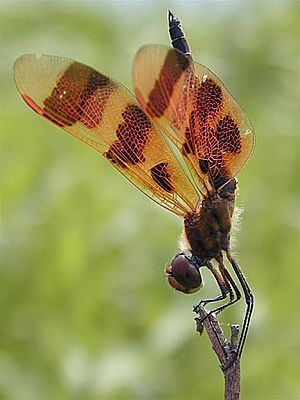 Some dragonflies change their resting position to prevent overheating. They may use a handstand-like position to prevent overheating on sunny days. The abdomen is raised until its tip points at the sun, minimizing their surface area exposed to the heat. The position is called the obelisk posture. The species that do this are called 'perchers'; they are "sit and wait" predators which spend much of their time keeping still.

A blue-glazed faience dragonfly amulet was found by Flinders Petrie at Lahun, from the Late Middle Kingdom of ancient Egypt. 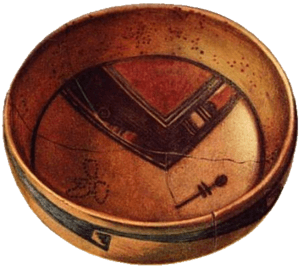 Dragonfly symbol on a Hopi bowl from Sikyátki, Arizona

For some Native American tribes, dragonflies represent swiftness and activity; for the Navajo, they symbolize pure water. They are a common motif in Zuni pottery; stylized as a double-barred cross, they appear in Hopi rock art and on Pueblo necklaces. They have been used in traditional medicine in Japan and China. In Indonesia, adults are caught on poles made sticky with birdlime, then fried in oil as a delicacy. 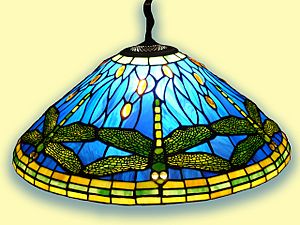 In the United States, dragonflies and damselflies are sought out as a hobby similar to birding and butterflying, known as oding, from the Latin name of the dragonfly order, Odonata. Oding is especially popular in Texas, where 225 different species of odonates have been observed. With care, and with dry fingers, dragonflies can be handled and released by oders, as can be done with butterflies, though it is not encouraged. 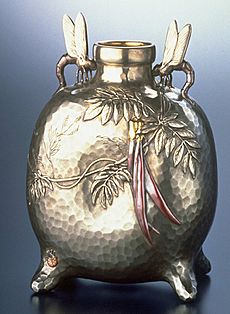 Images of dragonflies are common in Art Nouveau, especially in jewellery designs. They have also been used as a decorative motif on fabrics and home furnishings. Douglas, a British motorcycle manufacturer based in Bristol, named its innovatively designed postwar 350-cc flat-twin model the Dragonfly.

Among the classical names of Japan are Akitsukuni, Akitsushima, Toyo-akitsushima. Akitu or akidu are archaic or dialectal Japanese words for dragonfly, so one interpretation of Akitsushima is "Dragonfly Island". This is attributed to a legend in which Japan's mythical founder, Emperor Jinmu, was bitten by a mosquito, which was then eaten by a dragonfly.

As a seasonal symbol in Japan, the dragonfly is associated with autumn. More generally, dragonflies are symbols of courage, strength, and happiness, and they often appear in art and literature, especially haiku. Japanese children catch large dragonflies as a game, using a hair with a small pebble tied to each end, which they throw into the air. The dragonfly mistakes the pebbles for prey, gets tangled in the hair, and is dragged to the ground by the weight.

In Europe, dragonflies have often been seen as sinister. Some English vernacular names, such as "horse-stinger", "devil's darning needle", and "ear cutter", link them with evil or injury. Swedish folklore holds that the devil uses dragonflies to weigh people's souls. The Norwegian name for dragonflies is Øyenstikker ("eye-poker"), and in Portugal, they are sometimes called tira-olhos ("eyes-snatcher"). They are often associated with snakes, as in the Welsh name gwas-y-neidr, "adder's servant". The Southern United States term "snake doctor" refers to a folk belief that dragonflies follow snakes around and stitch them back together if they are injured.

All content from Kiddle encyclopedia articles (including the article images and facts) can be freely used under Attribution-ShareAlike license, unless stated otherwise. Cite this article:
Dragonfly Facts for Kids. Kiddle Encyclopedia.