Denshaw is a village in the civil parish of Saddleworth in the Metropolitan Borough of Oldham, in Greater Manchester, England. It lies by the source of the River Tame, high amongst the Pennines above the village of Delph, 4.6 miles (7.4 km) northeast of Oldham,3.3 miles (5.3 km) north-northwest of Uppermill and Shaw and Crompton. It has a population of around 500.

Historically a part of the West Riding of Yorkshire, Denshaw and its surroundings have provided archaeological evidence of Stone and Bronze Age activity in the area. The name Denshaw is of Old Norse derivation, and the oldest part of the village is an ancient hamlet.

Built up around the junction of five major roads, until the 20th century, Denshaw consisted mainly of smallholdings and a few public houses such as the Junction Inn, originally built as a coaching house for travellers. Denshaw is noted for its annual Whit Friday brass band contest.

There is evidence of Stone Age activity around Denshaw; in 2004 Saddleworth Archaeological Trust objected to the construction of a wind farm on a site on Denshaw Moor which had produced more than 200 Mesolithic artefacts. Human activity in Denshaw continued in the Bronze Age, as demonstrated by the discovery of a palstave on Wall Green in 1932, when a trench was being dug for a water pipe, and some tools from Denshaw Moor, on the site of the proposed wind farm, which include a ceremonial flint dagger. A Roman road may also cross the site.

The name Denshaw is derived from Old Norse, suggesting a settlement may have existed there during the period of the Danelaw. Denshaw Fold, the oldest part of the village, is an isolated hamlet of ancient origin. Many of the traditional stone dwellings are listed buildings and are descendants of the cluster of houses first built in the locality during the 16th century. Around 1795, the Junction Inn at Denshaw was erected. It served as a posting house on the Ripponden-to-Oldham turnpike road (opened in 1798) for the changing of horses and the provision of refreshments. 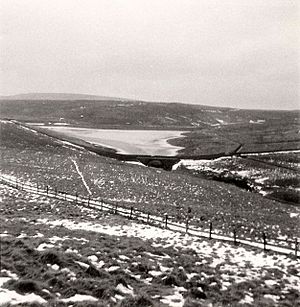 Dowry Reservoir, pictured here in 1967, was built in the late 19th century at the height of the Industrial Revolution.

Denshaw did not experience the same rate of urbanisation and industrialisation as its surrounding settlements during the Industrial Revolution, and it did not become a mill town or a centre of the local cotton mill boom as did nearby Rochdale, Milnrow and Oldham. However, Denshaw Vale was a calico printing factory which was "an important concern that employed a workforce of 150" during the 19th century. Furthermore, Denshaw was chosen as the site of a reservoir which local mills were to contribute monies and thereby use; In 1828, Rackenden Deign Reservoir was built by Denshaw to provide for 24 watermills. In 1818 an Oddfellows Lodge was erected in the village. In 1887, Denshaw was documented having a population of 1,279.

In 2003, energy company E.ON UK proposed the installation of seven 350-foot (107 m) wind turbines at Denshaw. This was met with opposition from the local and wider communities, culminating in the Saddleworth Moors Action Group, who were joined by environmentalist David Bellamy. The council received over 1,000 letters objecting to the proposed wind farm, and although initially accepted by the former Liberal Democrat local authority, the application was rejected by Labour-controlled Oldham Metropolitan Borough Council on 1 March 2006.

On 23 May 2007, Denshaw's post office (which doubled-up as the village's only shop) was the centre of a robbery. The "tiny premises" had been under threat of closure owing to Post Office's modernisation plans and has now closed.

On 17 April 2008, local, national and international media reported on Denshaw's entry on Wikipedia which had been vandalised with spoof information. The entry "attracted unwelcome notoriety after it was targeted" by editors, although the offending material was removed after initial reports were published. The story featured on the BBC's North West Tonight, a regional news programme, and later picked up by news services as far away as Pakistan.

Denshaw lies amongst the South Pennines, and is topographically characterised by hilly, upland terrain. Denshaw is not contiguous with any other settlement and for purposes of the Office for National Statistics, does not form part of the Greater Manchester Urban Area.

Denshaw experiences a temperate maritime climate, like much of the British Isles, with relatively cool summers and mild winters. There is regular but generally light precipitation throughout the year. 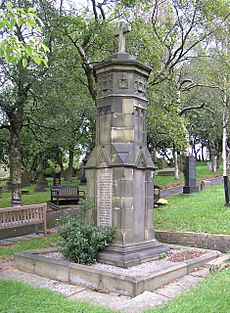 Denshaw's War Memorial is situated in the village churchyard.

Christ Church is Denshaw's parish church. It is part of the Church of England and lies within the Anglican Diocese of Manchester. A Grade II listed building since 19 June 1967, Christ Church dates from 1863, the year before Denshaw became an ecclesiastical parish. It was built by Henry Gartside, a resident of Denshaw.

Denshaw War Memorial lies within the churchyard. It was erected by public subscription "in honour of the men who fell and served" in the First and Second World Wars. The monument has Rolls of Honour containing the 32 names of those from Denshaw who fought and died in these wars.

Denshaw lies 2.5 miles (4.0 km) south of the M62 motorway, at a road junction where the A640, A672 and A6052 roads intersect. There are no rail services in Denshaw. Following closure of the Oldham Loop Line, the nearest railway station to Denshaw is located at Greenfield.

Two bus routes serve Denshaw. One is the daily 407 service between Denshaw and Oldham via Pennine Meadows and Moorside run by Stotts and operating hourly during the daytime. The other is the 354, running from Denshaw to Ashton-under-Lyne via Delph, Uppermill, Mossley and Stalybridge. It is operated by First Greater Manchester and runs every two hours Monday–Saturday daytime. There are no evening journeys on either service, they are replaced by a Local Link demand responsive transport service instead. In its guise as the 562 route, it carried on to Halifax in West Yorkshire. This was withdrawn in April 2006. At one point, the first and last journeys of the 354 were extended to Rochdale, when the service was worked by Bu-Val Buses earlier on in the 21st century. 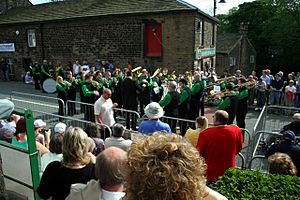 Since 1993, Denshaw has held an annual brass band contest.

Denshaw is noted for its annual brass band contest, held on every Whit Friday. The Denshaw Whit Friday Band Contest was established in 1993 and in its first year attracted 25 bands.

Denshaw has a primary school named Christ Church Primary. It is a denominational school with the Church of England, linked with Denshaw's parish church.

Denshaw village hall is the home of an amateur dramatic group and hosts various village activities; the hall was awarded a grant of £10,000 by the Awards for All scheme, a small grants scheme run by the National Lottery.

Denshaw is referred to in Barclay James Harvest's 1993 song Ballad of Denshaw Mill.

All content from Kiddle encyclopedia articles (including the article images and facts) can be freely used under Attribution-ShareAlike license, unless stated otherwise. Cite this article:
Denshaw Facts for Kids. Kiddle Encyclopedia.