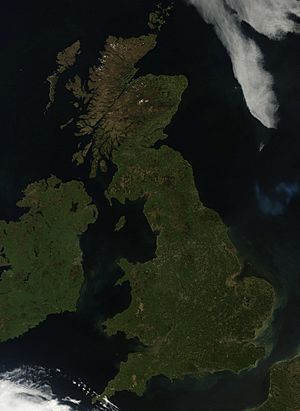 A satellite image of Great Britain

The island of Great Britain, along with the rest of the archipelago known as the British Isles, has a largely temperate climate. It contains a relatively small fraction of the world's wildlife. The biota was severely diminished in the last ice age, and shortly (in geological terms) thereafter was separated from the continent by the English Channel's formation. Since then, humans have hunted the most dangerous forms (the wolf, the brown bear and the wild boar) to extinction, though domesticated forms such as the dog and the pig remain. The wild boar has subsequently been reintroduced as a meat animal.

In most of Great Britain there is a temperate climate which receives high levels of precipitation and medium levels of sunlight. Further northwards, the climate becomes colder and coniferous forests appear replacing the largely deciduous forests of the south. There are a few variations in the generally temperate British climate, with some areas of subarctic conditions in areas such as the Scottish Highlands and Teesdale, and even sub-tropical in the Isles of Scilly. The seasonal changes that occur across the archipelago mean that plants have to cope with many changes linked to levels of sunlight, rainfall and temperature, as well as the risk of snow and frost during the winter.

Since the mid eighteenth century, Great Britain has gone through industrialisation and increasing urbanisation. A DEFRA study from 2006 suggested that 100 species have become extinct in the UK during the 20th century, about 100 times the background extinction rate. This has had a major impact on indigenous animal populations. Song birds in particular are becoming scarcer and habitat loss has affected larger mammalian species. Some species have however adapted to the expanding urban environment, particularly the red fox, which is the most successful urban mammal after the brown rat, and other animals such as common wood pigeon.

There are 220 species of non-marine molluscs that have been recorded as living in the wild in Britain. Two of them (Fruticicola fruticum and Cernuella neglecta) are locally extinct. In addition there are 14 gastropod species that live only in greenhouses.

Like many temperate areas, Great Britain exhibits a relative lack of snakes, with the European adder being the only venomous snake to be found there. The other notable snakes found in Great Britain are the grass snake and the smooth snake. Great Britain has three native breeds of lizard: slow worms, sand lizards and viviparous lizards. There are also turtles, such as leatherback turtles to be found in the Irish Sea, although these are rarely seen by the public. Other reptile species exist but are not native: aesculapian snake, wall lizard and the green lizard. 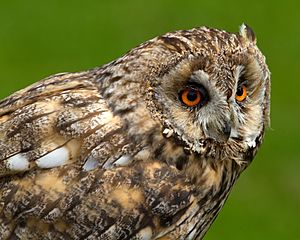 A Long eared owl in the UK.

In general the avifauna of Britain is similar to that of Europe, consisting largely of Palaearctic species. As an island, it has fewer breeding species than continental Europe, with some species, like crested lark, breeding as close as northern France, yet unable to colonise Britain. The mild winters mean that many species that cannot cope with harsher conditions can winter in Britain, and also that there is a large influx of wintering birds from the continent or beyond. There are about 250 species regularly recorded in Great Britain, and another 300 that occur with varying degrees of rarity.

Large mammals are not particularly numerous in Great Britain. Many of the bigger species, such as the grey wolf and the brown bear, were hunted to extinction many centuries ago. However, in recent times some of these large mammals have been tentatively reintroduced to some areas of mainland Britain. The largest wild mammals that remain in Britain today are predominantly members of the deer family. The red deer is the largest native mammal species, and is common throughout England, Scotland and Wales.

The other indigenous species is the roe deer. The common fallow deer is in fact not native to Britain, having been brought over from France by the Normans in the late 11th century. It has become well established. The sika deer is another small species of deer which is not indigenous, originating from Japan. It is widespread and expanding in Scotland from west to east, with a strong population in Peeblesshire. Bands of sika exist across the north and south of England though the species is absent in Wales. 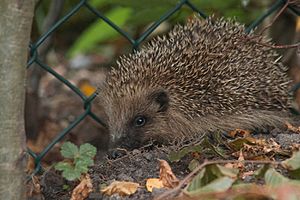 There are also several species of insectivore found in Britain. The hedgehog is probably the most widely known as it is a regular visitor to urban gardens. The mole is also widely recognised and its subterranean lifestyle causes much damage to garden lawns. Shrews are also fairly common, and the smallest, the pygmy shrew, is one of the smallest mammals in the world. There are also seventeen species of bat found in Britain: the pipistrelle is the smallest and the most common.

Rodents are also numerous across Britain, particularly the brown rat which is by far the most abundant urban animal after humans. Some however, are becoming increasingly rare. Habitat destruction has led to a decrease in the population of dormice and bank voles found in Britain. Due to the introduction of the North American grey squirrel, the red squirrel had become largely extinct in England and Wales, with the last population existing in parts of North West England. Rabbits and brown hares were introduced in Roman times, while the indigenous mountain hare remains only in Scotland and a small re-introduced population in Derbyshire.

There are a variety of carnivores, especially from the weasel family (ranging in size from the weasel, stoat and European polecat to the badger, pine marten, recently introduced mink and semiaquatic otter). In the absence of the locally extinct wolf and brown bear the largest carnivores are the badger, red fox, the adaptability and opportunism of which has allowed it to proliferate in the urban environment, and the Scottish wildcat whose elusiveness has caused some confusion over population numbers, and is believed to be highly endangered.

Various species of seal and dolphin are found seasonally on British shores and coastlines, along with harbour porpoises, orcas, and many other sea mammals.

Great Britain has about forty species of native freshwater fish, of which the largest is the salmon. The saltwater fish include some quite dangerous species such as sharks, though shark attacks are extremely rare in the archipelago.

All content from Kiddle encyclopedia articles (including the article images and facts) can be freely used under Attribution-ShareAlike license, unless stated otherwise. Cite this article:
Fauna of Great Britain Facts for Kids. Kiddle Encyclopedia.