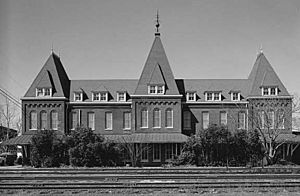 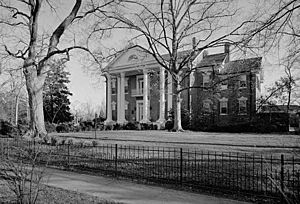 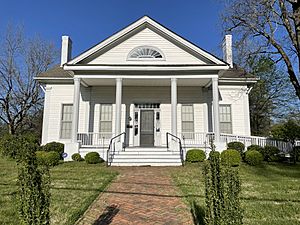 The Bolling–Gatewood House, home to Ida B. Wells 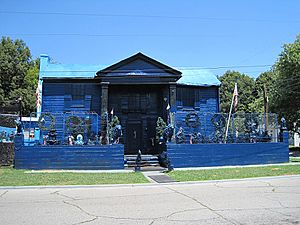 Graceland Too in Holly Springs

Holly Springs is a city in and the county seat of Marshall County, Mississippi, United States, at the southern border of Tennessee. Near the Mississippi Delta, the area was developed by European Americans for cotton plantations and was dependent on enslaved Africans. After the American Civil War, many freedmen continued to work in agriculture as sharecroppers and tenant farmers.

Holly Springs was founded by European Americans in 1836, on territory historically occupied by Chickasaw Indians for centuries before Indian Removal. They ceded most of their land under the Treaty of Pontotoc Creek of 1832. Most early US migrants were from Virginia, supplemented by migrants from Georgia and the Carolinas.

In the city's founding year of 1836, it had 4,000 European-American residents. A year later, in 1837, records show that forty residents were lawyers, and there were six physicians by 1838. By 1837, the town already had "twenty dry goods stores, two drugstores, three banks, several hotels, and over ten saloons." It was home to the Hillcrest Cemetery, built on land given to the city in 1837 by settler William S. Randolph.

Newcomers established the Chalmers Institute, later known as the University of Holly Springs, the oldest university in Mississippi.

The area was developed into extensive cotton Southern plantations, dependent on the labor of enslaved African Americans. Many had been transported from the Upper South in the domestic slave trade, breaking up families. The settlement served as a trading center for the neighboring cotton plantations. In 1837, it was made seat of the newly created Marshall County, named for John Marshall, the United States Supreme Court justice. The town developed a variety of merchants and businesses to support the plantations. Its population into the early twentieth century included a community of Jewish merchants, whose ancestors were immigrants from eastern Europe in the 19th century. Even though the cotton industry suffered in the crisis of 1840, it soon recovered.

By 1855 Holly Springs was connected to Grand Junction, Tennessee by the advancing Mississippi Central Railway. In ensuing years, the line was completed to the south of Hill Springs. Toward the end of the 19th century, the Kansas City, Memphis and Birmingham Railroad was constructed to intersect this line in Holly Springs.

During the American Civil War, Union General Ulysses S. Grant used this town temporarily as a supply depot and headquarters. He was mounting a major effort to take the city of Vicksburg on the Mississippi River. Confederate Earl Van Dorn led a raid of the area in December 1862, destroying most of the Union supplies at the Confederate Armory Site. Grant eventually succeeded in ending the siege of Vicksburg with a Union victory.

In 1878, the city suffered a yellow fever epidemic, part of a regional epidemic that spread through the river towns. Some 1,400 residents became ill and 300 died. The existing Marshall County Courthouse, at the center of Holly Springs' square, was used as a hospital during the epidemic.

After the war and emancipation, many freedmen stayed in the area, working as sharecroppers on former plantations. There were tensions as whites tried to reimpose white supremacy.

As agriculture was mechanized in the early 20th century, the number of farm labor jobs were reduced. From 1900 to 1910, a quarter of the population left the city. Many blacks were starting to move to the North in the Great Migration, to escape southern oppression. The invasion of boll weevils in the 1920s and 1930s, which was occurring across the South, destroyed the cotton crops and caused economic problems in the state on top of the Great Depression. Some light industry developed in the area. After World War II, most industries moved to the major cities of Memphis, Tennessee and Birmingham, Alabama.

The climate in this area is characterized by hot, humid summers and generally mild to cool winters. According to the Köppen Climate Classification system, Holly Springs has a humid subtropical climate, in common with the vast majority of the South. On December 23, 2015, a massive EF4 tornado struck the town at around 6:00 pm causing significant damage. 2 people on the city's south side were killed, including a 7-year-old boy. The child's death was confirmed by James Richard Anderson, the Marshall County, Mississippi, Coroner. Marshall County suffered damage, some total, to nearly 200 structures during the tornado outbreak, according to the Mississippi Emergency Management Agency.

Marshall Academy is a private institution for the MPSA, offering k-4 through 12th grade. Rust College was established in 1866 by the Freedman's Aid Society of the Methodist Episcopal Church to serve freedmen and is a historically black college.

The now defunct Mississippi Industrial College, intended as a vocational training school, was in Holly Springs, as was the Holly Springs Female Institute.

All content from Kiddle encyclopedia articles (including the article images and facts) can be freely used under Attribution-ShareAlike license, unless stated otherwise. Cite this article:
Holly Springs, Mississippi Facts for Kids. Kiddle Encyclopedia.