James Bruce of Kinnaird (14 December 1730 – 27 April 1794) was a Scottish traveller and travel writer who spent more than a dozen years in North Africa and Ethiopia. He claimed to be the first European to trace the origins of the Blue Nile, but his claim was false; the credit goes to Father Pedro Paez (1564-1622), who found it in 1618. 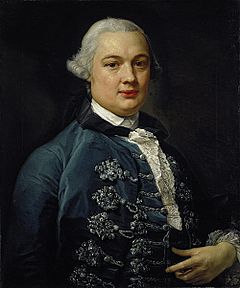 Portrait of Bruce by Pompeo Batoni, 1762 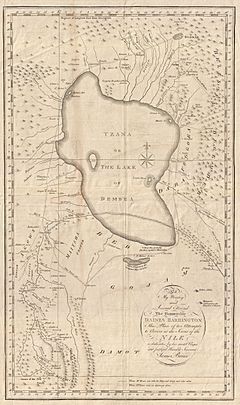 Bruce's map of the sources of the Nile

James Bruce was born at the family seat of Kinnaird, Stirlingshire, and educated at Harrow School and Edinburgh University, and began to study for the bar, but his marriage to the daughter of a wine importer and merchant resulted in him entering that business instead. His wife died in October 1754, within nine months of marriage, and Bruce thereafter travelled in Portugal and Spain as part of the wine trade. The examination of oriental manuscripts at the Escorial in Spain led him to the study of Arabic and Ge'ez and determined his future career. In 1758 his father's death placed him in possession of the estate of Kinnaird.

On the outbreak of war with Spain in 1762 he submitted to the British government a plan for an attack on Ferrol. His suggestion was not adopted, but it led to his selection by the 2nd Earl of Halifax for the post of British consul at Algiers, with a commission to study the ancient ruins in that country, in which interest had been excited by the descriptions sent home by Thomas Shaw (1694–1751), who was consular chaplain at Algiers. Having spent six months in Italy studying antiquities, Bruce reached Algiers in March 1763. The whole of his time was taken up with his consular duties at the piratical court of the dey, and he was kept without the assistance promised. But in August 1765, a successor in the consulate having arrived, Bruce began his exploration of the Roman ruins in Barbary. Having examined many ruins in eastern Algeria, he travelled by land from Tunis to Tripoli, and at Ptolemaida took passage for Candia; but was shipwrecked near Benghazi and had to swim ashore. He eventually reached Crete, and sailing thence to Sidon, travelled through Syria, visiting Palmyra and Baalbek. Throughout his journeyings in Barbary and the Levant, Bruce made careful drawings of the many ruins he examined. He also acquired a sufficient knowledge of medicine to enable him to pass in the East as a physician.

The Nile and Ethiopia

In June 1768 he arrived at Alexandria, having resolved to endeavour to discover the source of the Nile, which he believed to rise in Ethiopia. At Cairo he gained the support of the Mamluk ruler, Ali Bey. After visiting Thebes, where he entered the tomb of Ramesses III, KV11, he crossed the desert to Kosseir, where he embarked in the dress of a Turkish sailor. After an extensive navigation of the Red Sea in a local vessel, he reached Jidda in May 1769, and after a stay in Arabia he recrossed the Red Sea and landed at Massawa, then nominally in possession of the Turks, but actually controlled by the local N'aib, on 19 September. He reached Gondar, then the capital of Ethiopia 14 February 1770, where he was well received by the nəgusä nägäst Tekle Haymanot II, by Ras Mikael Sehul, the real ruler of the country, by Wozoro Aster, wife of the Ras (whom Bruce calls "Esther"), and by the Ethiopians generally. His fine presence (he was 6-foot 4 inches high), his knowledge of Ge'ez, his excellence in sports, his courage, resource and self-esteem, all told in his favour among a people who were in general distrustful of all foreigners. He received court appointments as Gentleman of the Bedchamber and commander of the Koccob Horse, the Emperor's household cavalry. He stayed in Ethiopia for two years, gaining knowledge, copying books and collecting herbs that had special medical use, which he later presented as a gift to the French and Italian monarchs.

Allegedly "determined to reach the source of the Blue Nile", and after recovering from malaria, Bruce set out again in October 1770. This time he travelled with his own small party, which included Balugani and a Greek named Strates. The final march was made on 4 November 1770. Late in the afternoon, after having climbed to 9,500 feet, Bruce's party came upon a rustic church, and the guide, pointing beyond it, indicated a little swamp with a hillock rising from the centre. That, he declared, was the source of the Nile. On 14 November 1770 he reached Gish Abay, the source of the Lesser Abay. When they reached the springs at Gish, James Bruce determined to be merry, picked up a half coconut shell he used as a drinking cup. Filling it from the spring he obliged Strates to drink a toast to "His Majesty King George III and a long line of princes" and another to "Catherine, Empress of all the Russians" – this last was a gesture to Strates' Greek origin, since Catherine the Great was just then at war with the Turks in the Aegean Sea. More toasts followed. Though admitting that the White Nile was the larger stream, Bruce argued that the Blue Nile was the Nile of the ancients and thus he was the discoverer of its source.

A Spaniard, the Jesuit missionary Pedro Paez, is widely regarded by historians as having been the first European to reach the site (1618); He is believed to be the first European to see and describe the source of the Blue Nile in his two-volume História da Ethiópia ("History of Ethiopia"). Bruce, however, disputed his claim and suggested that the relevant passage in Paez's memoirs had been fabricated by Athanasius Kircher. Later the source of the Blue Nile was visited by Fr. Jeronimo Lobo; Bruce sought to discredit the writings of Fr. Lobo, but more recent research has shown that Lobo's description of the source was perfectly correct in details. Bruce went as far as to claim (wrongly), that Lobo seemed to be able to sail on land and also denied the existence of a spitting cobra described by Lobo. The Greek Strates is arguably another European that reached the source of the Nile; however, in the eighteenth century, Greece was politically part of the Ottoman Empire, not Europe.

Setting out from Gondar in December 1771, Bruce made his way, in spite of enormous difficulties, by Sennar to Nubia, being the first European to trace the Blue Nile to its confluence with the White Nile. He was detained in Al Qadarif (which he calls "Teawa") by its governor Fidele, until a combination of cunning, diplomacy and a show of force by his friend the Ethiopian governor of "Ras el Fils" (Ras Filuk) induced Fidele to release him. Once in Sennar he found himself detained there, and on the night of 25 August the house he was staying in was attacked by thieves, whom Bruce for good reason suspected to be acting with the knowledge, if not on the orders of King Ismai'l. As he and his companions crossed the desert on the eastern side of the bend of the Nile, they came across the corpses of the caravan of the Muslim dignitary Mahomet Towash they had hoped to travel with; despite his status, they had been waylaid, robbed, and killed by the local tribesmen. On 29 November 1772 he reached Aswan, presently returning to the desert to recover his journals and his baggage, which had been abandoned in consequence of the death of all his camels. Cairo was reached in January 1773, and in March Bruce arrived in France, where he was welcomed by Buffon and other savants.

He came to London in June 1774, and was interviewed by James Boswell, who published a lengthy account of his travels in the London Magazine. Offended by the incredulity with which his story was received, Bruce retired to his home at Kinnaird at age 44.

In retirement, Bruce devoted himself to the management of his estate and the oversight of his collieries. In May 1776, he married Mary Dundas, the daughter of a neighbour, with whom he had three children. After his wife's early death in 1785, and at the urging of his friend Daines Barrington, he embarked on writing up his travels, which were published in five quarto volumes (totalling 3000 pages) as Travels to Discover the Source of the Nile, In the Years 1768, 1769, 1770, 1771, 1772 and 1773. The book was very successful, selling very well and being favourably reviewed in the monthly journals, but was assailed by other travellers as being unworthy of credence. The substantial accuracy of his Ethiopian travels has since been demonstrated, and it is considered that he made a real addition to the geographical knowledge of his day.

Bruce was a Scottish Freemason. He was Initiated in Lodge Canongate Kilwinning, No. 2, on 1 August 1753. The Lodge history, which details his Initiation in the Lodge reads: 'Bruce, James, Younger of Kinnaird — the Abyssinian Traveller.'

In his final years, Bruce became very corpulent. He died on 27 April 1794 of injuries sustained when on the previous day he fell down stairs at Kinniard House. He was buried behind his wife in the Larbert old churchyard.

Editions of his book

All content from Kiddle encyclopedia articles (including the article images and facts) can be freely used under Attribution-ShareAlike license, unless stated otherwise. Cite this article:
James Bruce Facts for Kids. Kiddle Encyclopedia.