The earliest evidence of human habitation in Konin has been dated to the Paleolithic Era. On the dunes near the Warta, various ancient flint tools and implements have been found, among them being knives, burins, and tanged points (projectile points). These earliest artifacts are of the Swiderian culture (Kultura Świderska) of 9000–8000 BC.

Architecturally, the city of Konin is divided into two historical parts - Old Town (Stary Konin) and New Konin (Nowy Konin), spreading northward from the river and developed primarily after 1945. 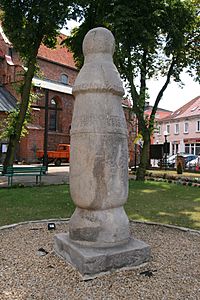 The Stone Signpost of Konin 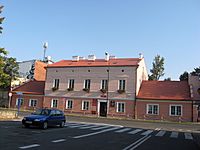 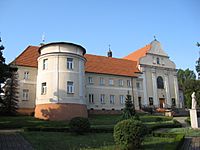 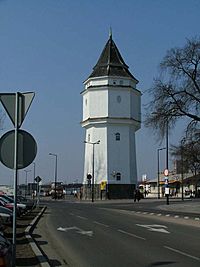 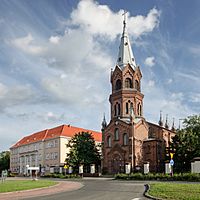 Lutheran Church of the Holy Ghost 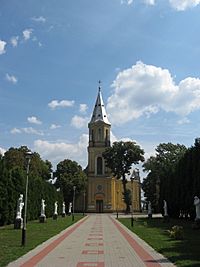 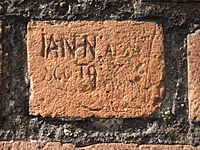 17th century inscription on the wall of St. Bartholomew's Parish Church, carved by a Scotsman 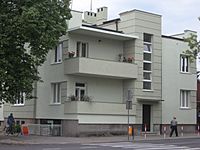 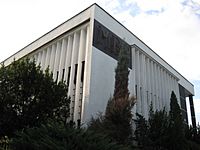 Perhaps owing to Konin being located at the junction of some of Poland's most historic lands - Greater Poland, Cuiavia, Mazovia, and Łódzkie - the local branch of the Polish Tourist and Sightseeing Society is very active. Moreover, the interest of non-Poles is aroused by the traces of, and monuments to, the many national minorities who have lived over the centuries in Konin and Konin County: Jews, Scots, Germans, Frenchmen, Russians, Romanis, Czechs, Swiss, Dutch Olędrzy, Vietnamese, Chinese, Romanians, and Africans.

Notably, Konin was one of towns along the Scottish Trail - the route through urban areas of Greater Poland and Lower Silesia that connected the various Scottish trading communities that settled in Poland from the 15th century onward.

All content from Kiddle encyclopedia articles (including the article images and facts) can be freely used under Attribution-ShareAlike license, unless stated otherwise. Cite this article:
Konin Facts for Kids. Kiddle Encyclopedia.