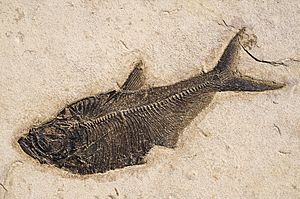 Diplomystus dentatus from the Green River Formation, an Eocene Lagerstätte 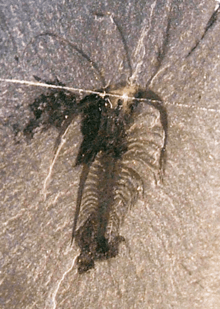 Extra-special sites are called Konservat-Lagerstätten (conservation Lagerstätten). These are deposits known for the exceptional preservation of fine details. There skeletons are mostly articulated (bones together in life form), and the soft parts are preserved as impressions or casts.

In Lagerstätten the normal processses of decay after death were less active or halted as sediment was deposited. This allowed the preservation of soft parts and exceptional detail. There are several possible causes which allow this to happen:

In these conditions, which are exceptional, scavengers, burrowers and bacteria are eliminated or reduced. Then the normal processes of deposition and fossilisation produces strata containing exceptional fossils.

Most of what we know about the details of extinct life comes from these exceptional sites. The soft-bodied Ediacaran biota, the fins of ichthyosaurs, the fur and wing structure of pterosaurs, the feathers on Mesozoic dinosaurs and birds, are all discoveries made on fossils from Lagerstätten. These sites preserve much of the fauna and flora of the time and place. That permits reconstruction of its ecology.

There are about 50 sites which have been described as Lagerstätten.

All content from Kiddle encyclopedia articles (including the article images and facts) can be freely used under Attribution-ShareAlike license, unless stated otherwise. Cite this article:
Lagerstätte Facts for Kids. Kiddle Encyclopedia.