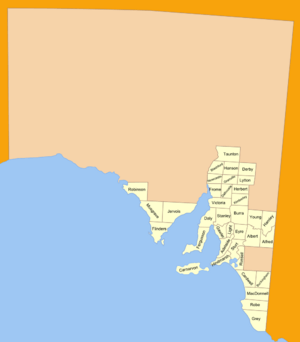 The 37 counties of South Australia in 1886; 12 more were later proclaimed 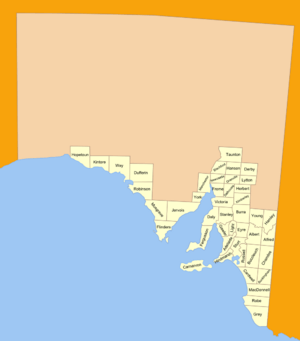 The 45 counties of South Australia in 1893; 4 more would later be proclaimed

The lands administrative divisions of South Australia are the cadastral (i.e., comprehensively surveyed and mapped) units of counties and hundreds in South Australia. They are located only in the south-eastern part of the state, and do not cover the whole state. 49 counties have been proclaimed across the southern and southeastern areas of the state historically considered to be arable and thus in need of a cadastre. Within that area, a total of 540 hundreds have been proclaimed, although five were annulled in 1870, and, in some cases, the names reused elsewhere.

All South Australian hundreds have unique names, making it unnecessary, when referring to a hundred, to also name its county (as is done in some land administration systems such as that of New South Wales).

With the exception of the historic Hundred of Murray (1853–1870), which occupied parts of five counties, all hundreds have been defined as a subset of a single county.

All content from Kiddle encyclopedia articles (including the article images and facts) can be freely used under Attribution-ShareAlike license, unless stated otherwise. Cite this article:
Lands administrative divisions of South Australia Facts for Kids. Kiddle Encyclopedia.