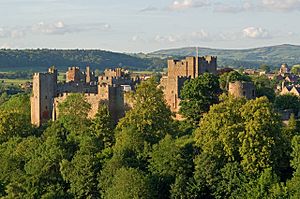 Ludlow Castle is a castle in Ludlow, England that was very important during the Middle Ages because of its position on the border between England and Wales.

Among those who lived at the castle were Prince Arthur, the son of King Henry VII of England, and Prince Edward, the future King Edward V of England.

Most of the castle is ruined, but visitors are allowed.

All content from Kiddle encyclopedia articles (including the article images and facts) can be freely used under Attribution-ShareAlike license, unless stated otherwise. Cite this article:
Ludlow Castle Facts for Kids. Kiddle Encyclopedia.