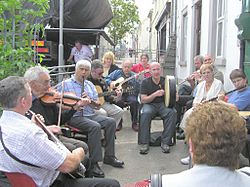 A typical scene at the Mary From Dungloe Festival, 2005.

The Mary From Dungloe International Festival is a popular Irish music festival held annually, usually at the end of July in the small town of Dungloe, County Donegal. The festival is centred on a pageant to find out which contestant has the spirit of the festival, who is then crowned "Mary From Dungloe". The winner of the contest holds this title for a year and acts as an ambassador for the festival. Irish emigrant communities from around the world, as well as some Irish counties and towns, participate by nominating a young woman, endearingly titled a "Mary", to represent their community at the contest. The festival has grown in popularity over the years and now regularly attracts tens of thousands of visitors to the area. The festival is inspired by the song "Mary from Dungloe" as the Rose of Tralee festival is by "The Rose of Tralee". 2019 saw the festival celebrate its 52nd anniversary, with Roisin Maher from New York becoming Mary From Dungloe 2019.

Many Communities around the world with links to County Donegal have their own local contests to pick their community's "Mary" who subsequently is nominated to travel to Dungloe to compete in the Mary From Dungloe contest. Irish communities who have entered contestants include:

There are a number of traditional events which are run every year as part of the festival. Here are just a few examples:

This list of songs or music-related items is incomplete; you can help by expanding it.

These contestants are as follows

They will be guided by the reigning Mary Roisin Maher from New York.

Many Irish and international acts have performed at the festival over the years. The traditional annual crowd puller, however, continues to be internationally renowned folk singer Daniel O'Donnell, who made his festival debut in 1985.

The Mary From Dungloe contest final has been compered by a number of famous faces.

All content from Kiddle encyclopedia articles (including the article images and facts) can be freely used under Attribution-ShareAlike license, unless stated otherwise. Cite this article:
Mary from Dungloe (festival) Facts for Kids. Kiddle Encyclopedia.