Mitcham is a district in south west London, located within the London Borough of Merton. It is centred 7.2 miles (11.6 km) south-west of Charing Cross. A suburban area, Mitcham is located on the border of Inner London and Outer London, and was historically in the county of Surrey. It is both residentially and financially developed and served by train, bus and tram routes. Localities within Mitcham include Mitcham Town Centre and Mitcham Common. Amenities include Mitcham Library and Mitcham Cricket Green. Nearby districts include Wimbledon, Streatham, Croydon, Tooting, Morden and Sutton. Mitcham itself had a population of 63,393 which includes the electrol wards of Cricket Green, Figges Marsh, Graveney, Lavender Fields, Longthornton and Pollards Hill in 2011 but its urban area had a population of 103,298. 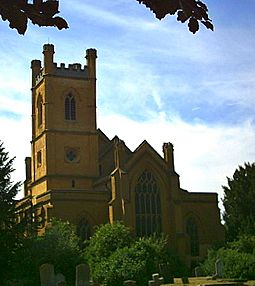 The toponym "Mitcham" is Old English in origin and means big settlement. Before the Romans and Saxons were present, there was a Celtic settlement in the area, with evidence of a hill fort in the Pollards Hill area. The discovery of Roman-era graves and a well on the site of the Mitcham gas works evince Roman settlement. The Saxon graveyard, located on the North bank of the Wandle is the largest discovered to date, and many of the finds therein are on display in the British Museum. Scholars such as Myres have suggested that Mitcham and other Thames Valley settlements were some of the first populated by the Anglo-Saxons. The area is a possible location for the Battle of Merton, 871, in which King Ethelred of Wessex was either mortally wounded or killed outright. The Church of England parish church of St Peter and St Paul dates from the Saxon era. Although it was mostly rebuilt in 1819–21, the current building retains the original Saxon tower. The Domesday Book of 1086 lists Mitcham as a small farming community, with 250 people living in two hamlets; Mitcham, an area known today as Upper Mitcham; and Whitford, today known as the Lower Green area.

The area lay within the Anglo-Saxon administrative division of Wallington hundred.

The Domesday Book records Mitcham as Michelham. It was held partly by the Canons of Bayeux; partly by William, son of Ansculf and partly by Osbert. Its domesday assets were: 8 hides and 1 virgate. It had ½ mill worth £1, 3½ ploughs, 56 acres (23 ha) of meadow. It rendered £4 5s 4d.

During her reign Queen Elizabeth I made at least five visits to the area. John Donne and Sir Walter Raleigh also had residences here in this era. It was at this time that Mitcham became gentrified, as due to the abundance of lavender fields Mitcham became renowned for its soothing air. The air also led people to settle in the area during times of plague.

When industrialisation occurred, Mitcham quickly grew to become a town and most of the farms were swallowed up in the expansion. Remnants of this farming history today include: Mitcham Common itself; Arthur's Pond, sited on the corner of Watney's Road and Commonside East, and named for a local farmer; Alfred Mizen School (Now named Garden Primary), named after a local nursery man who was very charitable towards the burgeoning town; and the road New Barnes Avenue, which was named after the farm that stood on that site. 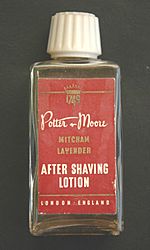 There were many lavender fields in Mitcham, and peppermint and lavender oils were also distilled. In 1749 two local physic gardeners, John Potter and William Moore, founded a company to make and market toiletries made from locally-grown herbs and flowers. Lavender features on Merton Council's coat of arms and the badge of the local football team, Tooting & Mitcham United F.C., as well as in the name of a local council ward, Lavender Field.

Mitcham was industrialised first along the banks of the Wandle, where snuff, copper, flour, iron and dye were all worked. Mitcham, along with nearby Merton Abbey, became the calico cloth printing centres of England by 1750. Asprey, suppliers of luxury goods made from various materials, was founded in Mitcham as a silk-printing business in 1781. William Morris opened a factory on the River Wandle at Merton Abbey. Merton Abbey Mills were the Liberty silk-printing works. It is now a craft village and its waterwheel has been preserved.

The activity along the Wandle led to the building of the Surrey Iron Railway, the World's first public railway, in 1803. The decline and failure of the railway in the 1840s also heralded a change in industry, as horticulture gradually gave way to manufacturing, with paint, varnish, linoleum and firework manufacturers moving into the area. The work provided and migratory patterns eventually resulted in a doubling of the population between the years 1900 and 1910.

Mitcham became a borough on 19 September 1934 with the charter of incorporation being presented to the 84-year-old mayor, Mr. R.M. Chart, by the Lord Lieutenant of Surrey, Lord Ashcombe.

Social housing schemes in the 1930s included New Close, aimed at housing people made homeless by a factory explosion in 1933 and Sunshine Way, for housing the poor from inner London.

From 1929 the electronics company Mullard had a factory on New Road.

Mitcham is referred to in a rhyme dating back to the 18th century. The rhyme was revised in the Victorian era as: 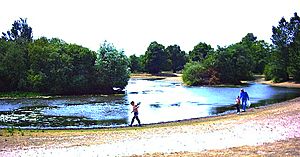 Mitcham is home to a large area (460 acres) of South London's open green space in the form of Mitcham Common. There are several ponds and a few buildings on the Common.

The Seven Islands pond is the largest of all the ponds, and was created as the result of gravel extraction during the 19th century. The most recent, Bidder's pond, was created in 1990 and named for George Parker Bidder. 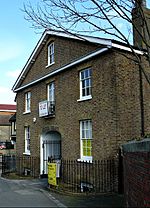 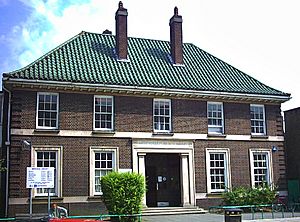 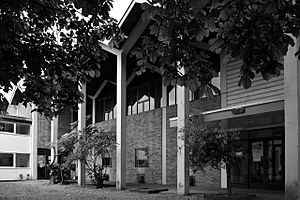 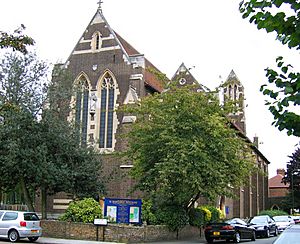 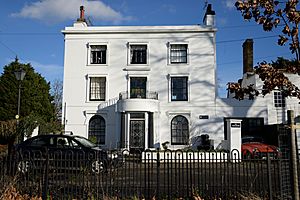 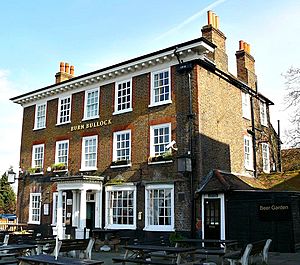 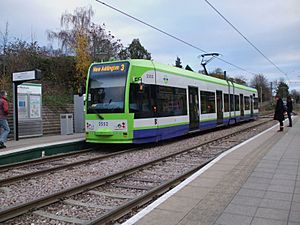 It is the first suburban station to be built in 50 years in the area. Trains on the Thameslink route from Central London continue on the loop via Sutton and Wimbledon back towards Central London. London Tramlink also serves Mitcham with 4 stops in the area; Mitcham Junction, Mitcham, Belgrave Walk & Phipps Bridge. Trams provide a direct service to Wimbledon, Croydon and New Addinton from Mitcham and also Beckenham Junction and Elmers End with a change at Croydon.

Bus services operated by London Buses are available from Mitcham. These include night buses to Aldwych and Liverpool Street in central London.

All content from Kiddle encyclopedia articles (including the article images and facts) can be freely used under Attribution-ShareAlike license, unless stated otherwise. Cite this article:
Mitcham, London Facts for Kids. Kiddle Encyclopedia.